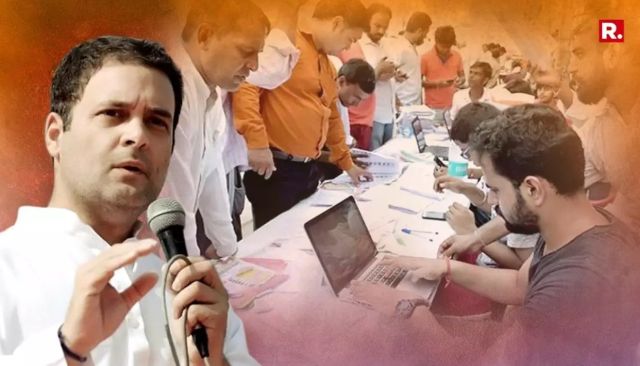 New Delhi: The Congress working committee (CWC), which held its meeting on Saturday, accused the Modi-Government of playing divisive politics over NRC to deflect Nation’s attention from the “colossal failures” of its. The party has also announced that it will launch a public campaign or ‘Jan Andolan’, against the government in the next few days after consulting with state units and leaders.

The CWC meet was chaired by the party president Rahul Gandhi who said key issues pertaining to corruption, the political situation of the country and unemployment were deliberated in the meet. It was the second meeting in a short span of time after Gandhi assumed the party leadership.

He said the CWC expressed grave concern over the “deliberate and diabolic” agenda of BJP to play politics to use NRC as a” divisive and emotional” tool for misleading the people.

“CWC noted with grave concern the deliberate and diabolic agenda of BJP to play politics to use NRC as a divisive and emotional tool for misleading the people. This is being done to deflect Nation’s attention from the colossal failures, mega scams like Rafale, Bank Frauds and others as also betrayal of people by Modi Government on various promises.”

Challenging BJP chief to stop lying on the deportation of foreigners, Surjewala claimed that the UPA-Congress Government deported 82,728 Bangladeshi foreigners between 2005-2013 as against a mere 1,822 deportation having been made by Modi Government.

He said that he is releasing the reply to Parliamentary question and PIB press release in evidence thereof. Asking that Amit Shah should now apologise to the Nation for manufacturing lies and misleading the country purely for political vote garnering in a sinister fashion, he said.

On one side, PM and BJP President are shedding crocodile tears on NRC and claiming deportation of foreigners but on the other side, Citizenship Amendment Bill, 2016 seeks to give citizenship to foreigners undoing the entire process of NRC, he added.

Congress leader said that PM Modi, Shah and Assam CM, Sarbananda Sonowal cannot fool all the people all the time and time has come for them to answer to people whether they support the NRC process or the Citizenship Amendment Bill, 2016 as both are directly in conflict with each other.

He said that CWC called upon the Congress leaders and workers, both in Assam and in rest of the country, to expose the acts of omission and commission being committed by Modi Government and not allow the Government to “escape accountability.”

He said the “CWC expressed shock and concern on the ‘Rafale Scam’ as also ‘Operation Cover-up’ initiated by Modi Government”.

On corruption, “the CWC alleged that the government’s ‘complicity and connivance’ in helping Mehul Choksi escape has been exposed and quoted Antiguan authorities who said that Indian agencies gave no unfavourable information against Mehul Choksi when a background check was conducted before granting the billionaire his citizenship.”

He said CWC has decided of launching “jan andolan” after consulting the state party units and leaders.

“CWC also noted with concern the severe agrarian distress, which has become a hallmark of Modi Government. PM Modi promised ‘Cost+50% Profit’ on MSP, but it has proved to be a ‘jumla’,” he said.

Congress general secretary Ashok Gehlot also briefed the media about the meeting saying the party is also preparing for the upcoming assembly elections in four states which is crucial ahead of the general elections.

Gehlot said the CWC has expressed concern over the continued down slide in the economy.

“CWC noted with anguish the failing state of economy and tax terrorism that prevails today in the country. Government has discovered the virtues of pre-liberalized regime moving towards a system of tax terrorism control and ‘licence raj’.