Rights of Children in Islam | According to Quran and Sunnah

In religion, Islam Allah Almighty commanded us (Muslims) to give honor, respect and obey our parents in entire life except when it comes to the disobedience of Allah (SWT). Islam raised the status of parents and made it obligatory for Muslims to obey their parents with love and respect. It is the right of parents to be loved and respected but as we all know rights also come with responsibilities and duties. Parents’ responsibilities for the upbringing and care of their children are mentioned in many verses of Holy Quran and hadiths.

Allah Almighty said in Holy Quran about the responsibilities of parents in these words: “O you, who have believed, protect yourselves and your families from a Fire whose fuel is people and stones…”(Quran, 66:6). Question is how we can save our families from this fire? The answer is very simple we have to show them right path as described by Allah Almighty in Holy Quran and Sunnah of Prophet Muhammad (SAW). We need to teach the difference between right and wrong to our children.

Children are joys of life as well as sources of pride, seeds of arrogance, the cause of distress and allurement. Therefore, we need to be very focused and careful about their upbringing. Children are dependent on their parents and Islam clearly emphasized on their responsibility on forming the child’s personality. Islam pays particular attention to the upbringing children in a proper manner. 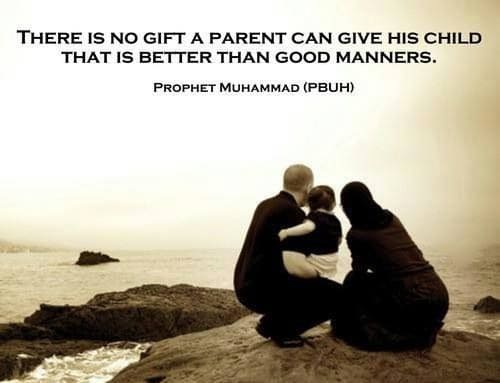 Children have the rights to be fed, clothed, education and protected until they reached to adulthood. These rights are for both girls and boys there is no difference between their rights. We can say that children are a trust given to the parents. Parents will be held accountable for this trust on the Day of Judgment. Parents are responsible for the moral, ethical and the basic and essential religious teachings of their children which is their responsibility. Allah Almighty says in Holy Quran: “And those who believed and whose descendants followed them in faith – We will join with them their descendants, and We will not deprive them of anything of their deeds. Every person, for what he earned, is retained…” (Quran 52:21)

Some basic rights of children are mentioned below:

In short, it is the duty of the parents to keep in mind the following things mentioned above concerning their children so that they may not be corrupted under the influence of undesirable suggestions. Parents should teach their children Islamic teachings as well as worldly so that they get success in this life and hereafter too.

Share
Previous How Much Love?
Next What is Mehr in Marriage? | According to Islam and Quran