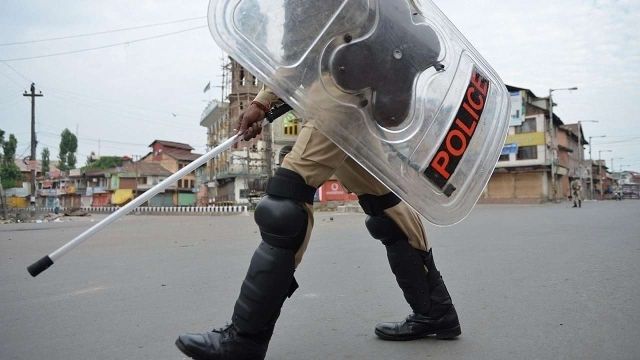 Srinagar : In a dramatic escalation in militancy, terrorists kidnapped and killed three policemen in Jammu and Kashmir on Friday, stunning the police force and leading to resignations by five policemen following death threats by the Hizbul Mujahideen.

The special police officers (SPOs) were gunned down on Friday, hours after they were abducted separately from their homes in south Kashmir’s Shopian district, a militant stronghold, police said.

A police officer told IANS that locals discovered their bullet-riddled bodies in a village in the morning, triggering a manhunt for the killers.

The slain policemen were identified as Firdous Ahmad Kuchai, Nisar Ahmad Dhobi and Kuldeep Singh. The SPOs form the lowest rung of the chain in the police force.

The horrific incident took place days after militants issued threats at some mosques in Shopian, asking policemen to quit their jobs or face consequences.

Police said four people, including a policeman’s brother, were abducted on Thursday night from their homes in Shopian. The incidents took place in Kapran and Batgund villages, surrounded by a thick cover of apple orchards.

The fourth abducted person, a civilian, was released unharmed after locals resisted his abduction by the militants.

Local news agencies quoted the Hizbul as taking responsibility for the abduction and killing of the policemen.

The police refuted rumours that the bodies of slain policemen were mutilated.

“Bullet-riddled bodies of the policemen were recovered from Kapran village. The bodies were riddled with bullets but not mutilated,” a senior police officer said.

The Jammu and Kashmir Police paid floral tributes to the slain men.

The police tweeted: “We have lost three of our brave colleagues in a barbaric terror strike… We condemn this inhuman act and assure that all the culprits shall be dealt with under law.”

Former Chief Minister Mehbooba Mufti expressed “outrage” over the the killings and asserted that dialogue was the only way out of the ongoing cycle of violence in Kashmir.

“Three more policemen have lost their lives to militant bullets. Outrage, shock and condemnation will be expressed by all of us on expected lines. Unfortunately, it brings no solace to the families of the victims.

“Clearly, with the rise in kidnapping of police personnel and their families, the Centre’s muscular policy is not working at all. Dialogue, the only way forward, seems to be a distant dream for now,” she tweeted.

The SPOs are engaged in counter-terrorism operations on a meagre remuneration of Rs 6,000 a month. There are around 36,000 SPOs. They are given uniform but, like other policemen, not all of them are issued weapons.

Militants have been threatening the SPOs in Kashmir to give up their jobs.

The Friday killings are the latest in a series of attacks and abductions of Kashmir policemen and security men in south Kashmir.