Patna:  The students of Rahmani Program of Excellence, also known as Rahmani30, have emphatically demonstrated their success at the JEE Mains examination 2019.  131 out of 142, that is 92% of all students, have succeeded. All but one in the female engineering stream were successful.

“This is an inspiring performance, especially given that engineering is a less favored stream for female students in our societal context,” said the Patna-based Center in the press release.

The National Testing Agency has published the results for the Joint Entrance Examination known as the JEE Mains. This is the entrance examination for Institutes of National Importance (INI), and several other engineering and architecture colleges. The INI category was established by an act of the Indian Parliament to identify and to provide special funding to educational organizations that are vital for the continued success of Indian innovation. Millions of student each year apply for a few thousand seats at the undergraduate level at these educational organizations. Successful student enjoy world class education, finest research facilities, international research opportunities all at practically free or highly subsidized fee structures. 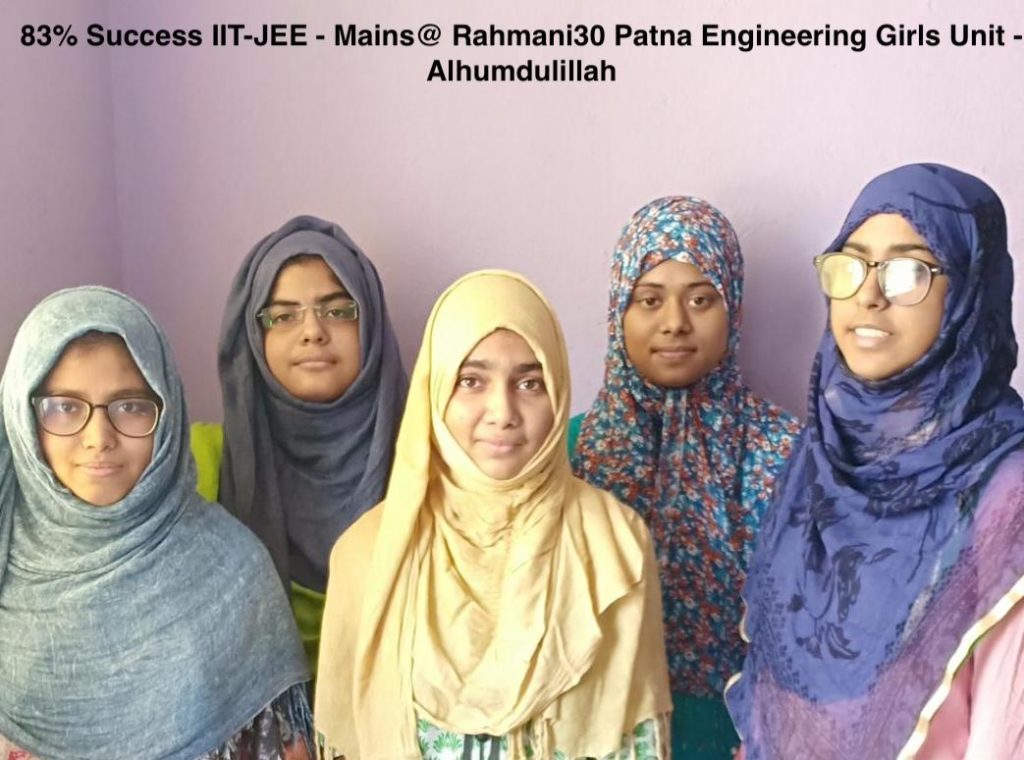 Rahmani30 has even gone global last year. Commerce batch students were able to clear from NRI Batch “Bangalore” National Stock Exchange NCFM certification during their first year in the program. For the second time entrance examination was successfully conducted in the United Arab Emirates. This is a great opportunity for these students to prepare for universities of national importance and seek their higher education in one of the top ranked universities in India. Rahmani30 team is currently in UAE and have travelled through Saudi Arabia to propagate excellence in higher education in Gulf for Non Resident Indians.

One of the most promising and exciting developments have been the success of the Medical stream of Rahmani30 students at this challenging test. 17 out of 22 boys from their Patna branch, and 3 out of 9 girls from their Aurangabad branch, who attempted this exam were successful. This unprecedented success can be attributed to the unique learning methodology of Rahmani30. The successful students can very well leverage their talents in fields such as Biotechnology, Bioengineering, and others.

This year the National Testing Agency conducted the Joint Entrance Examination-Mains twice; in January about 1 million students appeared in this examination, and in April the same number appeared again. Only the successful students at this test can take the JEE Advanced examinations for admissions to the prestigious Indian Institute of Technology.

Rahmani Program of Excellence under Rahmani Foundation has been successfully replacing educational hopelessness in the community with the courage to dream big, all the while demonstrating its proven method of success. Maulana Mohammad Wali Rahmani, who is the founder of this nation-wide program credits success to the consistent guidance and untiring effort of Abhayanand, Ex. DGP Bihar, and sincere and continuous efforts of center leadership that comprises of the faculty, management, and staff. He maintains that this result could not have been realized had the students and their parents not partnered with us, especially given our different model of education.