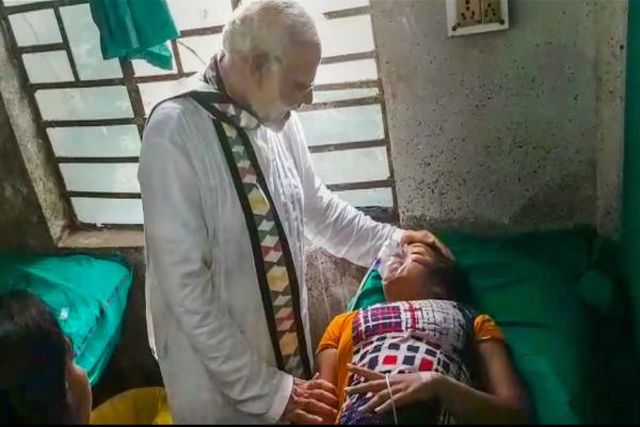 Midnapore (West Bengal) : Altogether 90 persons sustained injuries and were taken to the hospital on Monday when a part of the canopy collapsed during Prime Minister Narendra Modi address in a rally in West Bengal’s Midnapore town, hospital authorities said.

The injured were rushed to the Midnapore Medical College and Hospital in ambulances in the Prime Minister’s convoy and even on motorcycles, after the incident on Monday afternoon.

According to a list released by the Medical Superintendant of the hospital, a total of 90 persons were taken to the hospital, including 66 males and 24 females.

However 14 of them, however, were discharged after primary treatment, and the rest admitted to different departments in the hospital.

The rally was organised by the state unit of the Bharatiya Janata Party. State BJP president Dilip Ghosh later said: “If it is found that the mishap happened due to any intentional mistake on anybody’s part, then proper action will be taken.”

After the rally, Modi visited the injured in the hospital and talked to the doctors treating them.

“Modi ji was at the hospital for five-six minutes. He talked to some of the injured and the doctors and then left for Delhi by a helicopter,” a BJP leader said.

According to informed sources, the canopy structure had weakened due to incessant rain since the morning. It collapsed as a section of the enthusiastic audience tried to climb up to have a glimpse of the Prime Minister who had by then begun to speak.

Modi stopped for a few minutes when the structure collapsed to urge the audience to be careful, get off the stage and move to a safer area.

The Prime Minister was also seen instructing officials present on the stage to ensure speedy and proper treatment for the injured.

Towards the end of his speech, Modi hailed the audience and said he will remember this incident throughout his life.

“The people of Bengal today showed me what courage means. In spite of constant rain, they gathered here in lakhs and even after a part of the structure collapsed, they showed such discipline to take the injured to the hospital while letting the rally continue. I can’t thank you people enough for such positivity,” he said.

“I come from Gujarat. But I can’t think of such courage and discipline. I will never forget this rally in my whole life.”

“I couldn’t speak much as I was not fully conscious, but somehow asked for his autograph. He told me to remain strong and I will recover soon,” said an injured young girl who came for the rally.

Her sister and mother also received injuries in the accident.

Another injured girl said: “I was also not in my senses. He held my hand and told me not to be afraid and take care of myself. Even my mother has received injuries on her waist and legs.”

“We pray for the speedy recovery of those injured at the Midnapore rally. The government is giving all help for their medical treatment,” she tweeted.

Share
Previous Kejriwal attacks Modi for harping on Hindu, Muslim issue
Next Meet Mohammed Lateef Khan, the man behind an educational revolution who has produced over 6200 doctors and engineers