Hamid joined the army in December 1954, and was posted to the 4th Battalion of the Grenadiers regiment. During the Sino-Indian War, his battalion participated in the battle of Namka Chu against the People’s Liberation Army. During the Indo-Pakistani War of 1965, the 4 Grenadiers battalion was entrusted with a vital position before the village of Chima on the Khem Karan–Bhikhiwind line. At the Battle of Asal Uttar on 9–10 September 1965, Hamid destroyed six Pakistani tanks and was killed during an engagement with a seventh.

Hamid was born to Sakina Begum and Mohammad Usman (a tailor by Profession & caste) in a family of 4 more brothers & 2 sisters in the village of Dhamupur in Ghazipur district, United Provinces, British India on 1 July 1933.[3]

He joined the Grenadiers regiment of the Indian Army on 27 December 1954. Hamid was later posted to the regiment’s 4th Battalion (formerly the 109th Infantry), where he served for the rest of his career. He served with the battalion in Agra, Amritsar, Jammu and Kashmir, Delhi, NEFA and Ramgarh.

During the Sino-Indian War of 1962, Hamid’s battalion was part of the 7th Infantry Brigade commanded by Brigadier John Dalvi and participated in the battle of Namka Chu against the People’s Liberation Army. Surrounded and cut off, the battalion broke out on foot into Bhutan and on to Misamari. Second Lieutenant G. V. P. Rao was posthumously awarded the Maha Vir Chakra for his actions during the war; it was the highest gallantry award received by the battalion since Indian independence, until Hamid’s commendation. 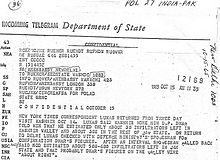 A declassified US State Department telegram that confirms the existence of hundreds of infiltrators in the Indian state of Jammu and Kashmir.

As a prelude to Operation Gibraltar, Pakistan’s strategy to infiltrate Jammu and Kashmir, and start a rebellion against Indian rule, Pakistani forces attempted a series of incursions across the Jammu and Kashmir border. From 5 to 10 August 1965, Indian troops uncovered a mass infiltration. Captured documents and prisoners revealed Pakistan’s plans to capture Kashmir with a guerrilla attack were brought to light; about 30,000 guerrillas were trained by the Pakistanis for this purpose. For reasons which remain unknown, the guerrilla troops were dispersed, dissipated or destroyed and the action never took place. Haji Phir and Phir Saheba were captured by India in an attempt to eliminate the guerrilla bases, and Pakistan launched an offensive which captured Chhamb and Jourian. Indian Air Force bases in Amritsar were also attacked.

In a counter-offensive, India launched operations across the international border. The 4th Infantry Division was charged with the capture of Pakistani territory east of the Ichogil Canal[a] and the suppression of a possible attack along the Kasur–Khem Karan axis. After reaching the canal, the division awaited a Pakistani assault. 4 Grenadiers was entrusted with a vital position before the village of Chima on the Khem Karan–Bhikhiwind line.

4 Grenadiers arrived at midnight on 7–8 September, and had dug 3-foot (0.91 m) trenches by dawn. At 7:30 am they heard the first rumbles of Pakistani tanks, which straddled the road an hour and a half later. Hamid led the vehicle-mounted recoilless rifle (RCLR) detachment of his battalion. The battalion held their fire until a tank 30 feet (9.1 m) away was hit by Hamid with his RCL gun, and Pakistani soldiers in the two following tanks fled. The Indians experienced artillery shelling at 11:30 am, followed by another armour attack. Hamid knocked out another tank, and the Pakistani soldiers in the following tanks again fled. By the end of the day, an engineering company had laid anti-personnel and anti-tank mines around the Grenadiers’ position.

They battalion was attacked by Pakistani Sabre jets at 9:00 am on 9 September, with no casualties. The Pakistanis made armoured attacks at 9:30, 11:30 am and 2:30 pm. By the evening, Hamid had knocked out four tanks. The battalion destroyed a total of 13 tanks, and many were abandoned. The Indians withdrew a squadron of Sherman tanks, which were ineffective against the Pakistani Patton tanks. Centurion tanks were also withdrawn to deploy them in a position more suitable for a tank battle. As a result, the 4 Grenadiers were left with only RCL guns and mines.

On 10 September at about 8:00 am the first wave of three tanks, one leading and the other two following at a 200-yard (180 m) distance, arrived.
Hamid knocked out another tank with his RCL gun. The Pakistanis attacked again with increased artillery support at 9:00 am, and Hamid destroyed another tank. Since his open jeep was vulnerable to the shelling, he moved to another position and ordered his men to take cover. Hamid and a Pakistani tank soon spotted each other. Alone and unable to change his position, he fired at the tank as it fired at him and he was killed instantly.
The battalion suppressed further attacks by the Pakistanis, and the battle was a decisive Indian victory.

For his actions at the Battle of Asal Uttar, Hamid was awarded the Param Vir Chakra on 10 September 1965. The official citation read:

At 0800 hours on 10 September 1965 Pakistan forces launched an attack with a regiment of Patton tanks on a vital area ahead of village Cheema on the Bhikkiwind road in the Khem Karan Sector. Intense artillery shelling preceded the attack. The enemy tanks penetrated the forward position by 0900 hours. Realising the grave situation, Company Quartermaster Havildar Abdul Hamid who was commander of a RCL gun detachment moved out to a flanking position with his gun mounted on a jeep, under intense enemy shelling and tank fire. Taking an advantageous position, he knocked out the leading enemy tank and then swiftly changing his position, he sent another tank up in flames. By this time the enemy tanks in the area spotted him and brought his jeep under concentrated machine-gun and high explosive fire. Undeterred, Company Quartermaster Havildar Abdul Hamid kept on firing on yet another enemy tank with his recoilless gun. While doing so, he was mortally wounded by an enemy high explosive shell. Havildar Abdul Hamid’s brave action inspired his comrades to put up a gallant fight and to beat back the heavy tank assault by the enemy. His complete disregard for his personal safety during the operation and his sustained acts of bravery in the face of constant enemy fire were a shining example not only to his unit but also to the whole division and were in the highest traditions of the Indian Army.

Hamid received India’s highest military decoration, but retired Indian Army general Ian Cardozo has written that the award citation did not give him full credit for the number of tanks he destroyed. Although battalion and regimental accounts claim seven tanks, it is unclear if the seventh tank was destroyed by Hamid. The citation notes only the two Pakistani tanks known to be destroyed by Hamid on 10 September, after he had destroyed four other tanks the day before; he was killed while fighting the seventh. News of Hamid’s death was sent to Army HQ in New Delhi and the award became posthumous, but the authorities failed to credit him with the four tanks destroyed on 9 September.

A ₹3 stamp commemorating Hamid was issued by India Post on 28 January 2000 as part of a set of five stamps honouring recipients of awards for gallantry. The stamp has a bust of Hamid and an illustration of a jeep with a recoilless rifle.[15]

The Prime Minister of India, Narendra Modi, lays a wreath at the memorial of Abdul Hamid, PVC, at Asal Uttar, in Punjab on 11 November 2015

Hamid’s widow, Rasoolan Bibi, met Indian President Pratibha Patil in Lucknow in 2008 with requests to establish a military-recruiting center in his village, convert Hamid’s home in Dullapur into a memorial, observe his death anniversary at the national level and help her grandchildren obtain government employment. Every year, there is big sports and culture fair is organized in asal uttar village on 9 September in the memory of Abdul Hamid [16] A memorial to Hamid in his home village of Dhamupur which had fallen into disrepair was renovated in 2011 by the Flags of Honour Foundation for the 46th anniversary of his death. The renovation included a new statue of Hamid, repairs and painting of the gates and boundary, and improvements to the garden. Indian Member of Parliament Rajeev Chandrasekhar, founder of Flags of Honour, spoke on the occasion.[17][18] On 10 September 2017, the 52nd anniversary of Hamid’s death, then Chief of the Army Staff General Bipin Rawat unveiled a memorial in Ghazipur district.[19]

The tenth episode of Param Vir Chakra, a 1988 TV series on the lives of Param Vir Chakra recipients, explored Hamid’s actions on 10 September 1965. Hamid was played by Naseeruddin Shah, and the episode was directed by Chetan Anand.[20]

Story of CQMH Abdul Hamid released by the Indian Army detailing the events of the battle and his death.[23]

The Empowered Muslim Women from the Islamic History

Taj-ul-Masajid: An epicentre of Communal Harmony and a symbol of Women Empowerment

The use of Loudspeakers in Mosque