From above verse of Holy Quran we can conclude that First Prophet (PBUH) was taken to Masjid al-Aqsa which is located in Jerusalem and from there He (SAW) ascended to skies and the higher journey began. Isra is an Arabic word which refers to Prophet Muhammad’s (SAW) miraculous night journey explicitly from Makah to Jerusalem, to the site of Al-Aqsa Mosque in Jerusalem as mentioned in Surah Al-Israa in Holy Quran. 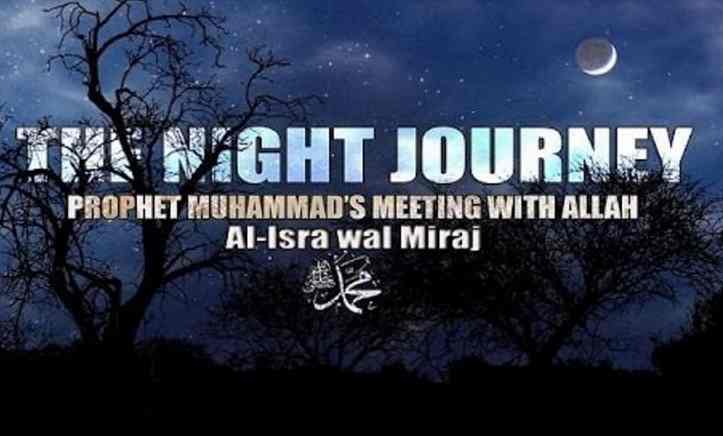 In this miraculous night of Isra, Holy Prophet Muhammad (SAW) started His journey with Angel Gabriel on an animal named Buraq. In another verse of Holy Quran details about Isra and Miraj stated in a way: “While he was in the highest part of the horizon: Then he approached and came closer, And was at a distance of but two bow-lengths or (even) nearer; So did (Allah) convey the inspiration to His Servant (conveyed) what He (meant) to convey. The (Prophet’s) (mind and) heart in no way falsified that which he saw. Will ye then dispute with him concerning what he saw? For indeed he saw him at a second descent. Near the Lote-tree beyond which none may pass: near it is the Garden of Abode. Behold, the Lote-tree was shrouded (in mystery unspeakable!) (His) sight never swerved nor did it go wrong! For truly did he see the Signs of His Lord the Greatest.” (Quran, 53:7-18)

From above ayah, we came to know the peak of Miraj where Prophet Muhammad (SAW) met Allah Almighty in person. Every Muslim is aware of this particular happening during the night; yet, there are three other major events happened on the night of Isra and Miraj. Below a brief detail about three major events on the night of Miraj is mentioned.

In nutshell, the night of Isra and Miraj is considered the most respectable night because of miracle journey of Holy Prophet (SAW) that Allah Almighty provided only to our beloved Prophet Muhammad (SAW).

Celebration of Eid-ul-Azha amidst Corona pandemic and restrictions

If sacrifice not possibel Muslims can donate money to poor on Eid-ul-Azha, says Hyderabad seminary

The very word “Islam”, which denotes peace and surrender, propagates the message of Almighty Allah …