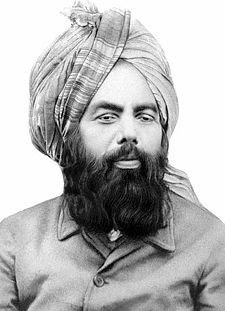 The following notes are about the attitudes of a few Muslims towards the Ahmadiyya Muslims. Take the time to observe a few Muslim discussion groups – you will find hundreds of judgmental pronouncements on stuff like this, while in the same groups intellectual articles barely get any discussion.

The ugliest thing that I have heard about Muslims;

A Christian Neocon told me; “Muslims are like dogs, throw them bones and they will go after it, as if that is the only thing they have in life to fight for. We have people among you to continuously throw bones like Hijab, Bidda, Haraam, beating the wife, Shia, Sunni, Ahmadi or Ismaili – and we keep them busy with those, we love it.” Unfortunately, a tiny minority of Muslims chew on the bones, and thank God, a majority of us mind our own business.

There is an ideological imbalance among those few; Prophet taught about the middle path a balance between Deen and Duniya, we need to be conscious of that. In the Parliament of World Religions conference, I attended a Jewish conference on future of Judaism, a Rabbi was clear, “We Jewish people focus on living the life while we are trustees of it until God takes it back and our focus is here, where we live”. What about us? As Muslims, we focus on the life here after and betray the life here”. Is there meaning in it?

I am saddened to hear this petty stuff that we are getting entangled with, and I shall save this at http://www.worldmuslimcongress.com/ under the topic Ahmadiyya Muslims among Muslims, and just copy and throw at those who are involved in this non-sense who is and who isn’t a Muslim.


First of all what difference does it make? Secondly and most importantly the ones who talk ill about others, have not met with Ahmadiyya people, and if they have met, they have met their matching counterparts who harp on the perceived wrong, rather than volumes of goodness. They need to talk with the Ahmadiyya intellectuals or scholars. As Muslims, we need to develop standard response to educate the ill-informed amongst us.

I was going to write the notes, then just looked at Sura Hujurat and found the answers. By the way, those who are not Muslims and reading this, if you want to study Pluralism, read the Quraan with an open mind and you will find this to be documents written for co-existence.

49:6 (Asad) O YOU who have attained to faith! If any iniquitous person comes to you with a [slanderous] tale, use your discernment, [5] lest you hurt people unwittingly and afterwards be filled with remorse for what you have done. [6] –

49:9 (Asad) Hence, if two groups of believers fall to fighting, [9] make peace between them; but then, if one of the two [groups] goes on acting wrongfully towards the other, fight against the one that acts wrongfully until it reverts to God’s commandment; [10] and if they revert, make peace between them with justice, and deal equitably [with them]: for verily, God loves those who act equitably! –

49:10 (Asad) All believers are but brethren. [11] hence, [when¬ever they are at odds,] make peace between your two brethren, and remain conscious of God, so that you might be graced with His mercy. –

49:1 (Asad) O YOU who have attained to faith! Do not put yourselves forward [1] in the presence of [what] God and His Apostle [may have ordained], but remain conscious of God: for, verily, God is all-hearing, all-knowing! –

The Ahmadiyya Muslim community held an interfaith conference on Sunday, March 6, 2010 at their Masjid in Allen, Texas. Imams, Rabbis, Pastors, Gurus and I spoke about the need for interfaith dialogue. Do you know that Prophet Muhammad was one of the first persons to have conducted interfaith dialogues? There was a Zoroastrian priest who has done that earlier. The oft repeated story of the Christians from Najran in Masjid -e- Nabwi has a point – Prophet offered them to pray their own prayers in his Mosque. Do you understand Prophet’s wisdom in that?

Insha Allah, I will compile a brief report of the meeting.

I have been to the Ahmadiyya Mosque a few times, they use the same Qur’aan we use do, and their beliefs are about the same. Even if they have a different version so what? Do we, as Muslims understand what prophet meant and predicted 72 groups within Islam? Didn’t he acknowledge variations are bound to happen given the human Fitra (nature)? Why would he even say that? Didn’t he understand us all some 1400 years ago?

A major correction to Muhammad Irtaza’s note: They do not claim that Muhammad was not the final prophet. However, they do believe that the promised Messiah is Mirza Ahmed from Qadian. I just looked up Wiki to double check, please note that Wikipedia is not a reliable and scholarly referential site, but it gives a good start. http://en.wikipedia.org/wiki/Mirza_Ghulam_Ahmad

A suggestion to the Ahmadiyya community, not to the scholars, but the ordinary folks among them; Please do not make the mistake of pointing that it is the” other Muslims” that have the Madrasas who teach violent Jihad.” The attendees laugh at it, that you are playing politics to gain support by denigrating the other, to the Neocons we are all the same. Just like any community, the majority of them do the right thing, a few make a mess for every one. Let’s keep our Jihad to correct them from rumors, gossip and false information.

Let’s uplift every one, and all of us go up.

To be a Muslim is to mitigate conflicts and nurture goodwill.

[Mike Ghouse is a thinker, writer, speaker, optimist and an activist of Pluralism, Interfaith, Co-existence, Peace, Islam and India. He is a frequent guest at the TV, radio and print media offering pluralistic solutions to issues of the day. His work is reflected at three websites and 22 Blogs at http://www.mikeghouse.net/. He can be contacted at mikeghouse@aol.com]

The thread below prompted me to write this essay. Some Anwar Haque had written the dumbest comments;

Qadyanis are creation of Zionists for their perpetual service

You know very well that the Prophet Mohammad did not create Shia or Sunni. So, tell me who created them?! I am not Qadyani, nor Shia nor Sunni. How about you?! As far as I know Qadyanis claim that Mohammad was not the final Prophet ,and that was not in line with the teaching of the Quran.

But, you claim that Mohammad was the final messenger, and that was also not in line with the teaching of the Quran! So, why do you think you are better than Qadyani?! Please know that, according to the Quran, Abraham was neither Jewish nor Christian, but was a monotheist Muslim.

[3:67] Abraham was neither Jewish, nor Christian; he was a monotheist submitter. He never was an idol worshiper.

Similarly, Muhammad was neither Sunni nor Shia …nor…, but was a monotheist Muslim.

[16:123] Then we inspired you (Muhammad) to follow the religion of Abraham, the monotheist; he never was an idol worshiper.

Thank you and may God guide me,