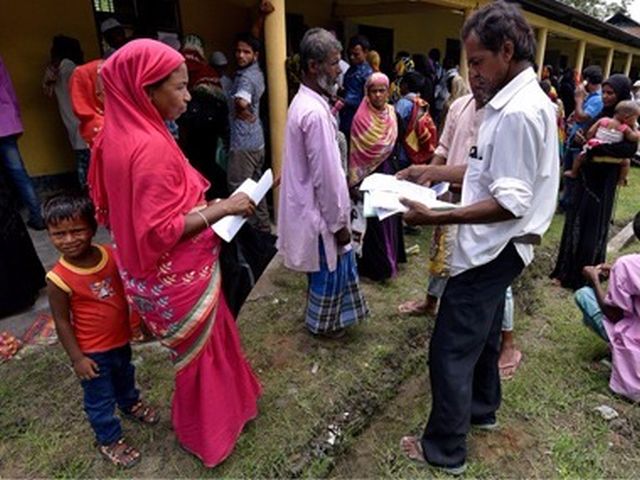 Ever since the former saffron stalwart, Arun Shourie, created a stir in the 1980s with his articles on illegal immigrants in Assam comprising Bangladeshi Muslims, the Bharatiya Janata Party (BJP) has seen the issue as an excellent one to furbish its nationalist credentials by portraying the “aliens” as a security threat. The depiction also fitted in with the party’s anti-Muslim worldview.

The latest row over the National Register of Citizens (NRC) in the state can be regarded, therefore, as a continuation of the anti-foreigner agitation conducted by the All Assam Student Union (AASU) the 1980s although the lead has been taken this time by the BJP while its ally in the state government, the Asom Gana Parishad (AGP), which is the AASU’s successor, is maintaining a low profile.

However, a solution to the problem of “foreigners” is not simple. Since Assam has long been a province of immigrants with the tea plantation labourers having been brought in from the tribal areas in Bihar by the colonial rulers and the “hardy” peasants of East Bengal being encouraged to settle down in the state in the pre-partition period to cultivate land, Assam has become a mosaic of various communities, including its own tribals.

Untangling the medley of the diverse ethnic groups is fraught, therefore, with the likelihood of creating tension leading to violence although Mamata Banerjee’s outbursts about a “civil war” and a “bloodbath” are an overstatement. Her objective is obviously to consolidate her own pro-Muslim and “liberal” supporters in West Bengal and elsewhere in the context of her prime ministerial ambitions.

However, it is the near-certainty of a volatile outcome of the detection and deportation of the “foreigners” mandated by the Assam accord of 1985 which has come in the way of implementing the central point of the agreement. This “failure” was not so much the result of the Congress’s “appeasement” of Muslims, as the BJP alleges, as the need to proceed with caution.

The same advice is now being given by the Supreme Court, under whose aegis the enumeration of the citizens is being conducted. Union Home Minister Rajnath Singh, too, has been favouring circumspection with the assurance that all opportunities will be given to the four million people excluded from the NRC to prove their bona fides.

In contrast, BJP president Amit Shah has virtually disenfranchised the four million by dubbing them “ghuspetias” (infiltrators) while the Advocate General has told the Supreme Court that their biometric details will be collected so that they may not settle down in other states. What is more, the BJP leaders are talking in terms of similar headcounts in other states, especially West Bengal, which is believed to harbour a substantial number of Bangladeshi infiltrators.

It appears, therefore, that even before the NRC’s final report has been prepared, the BJP is seeing the exercise as a means of raising the fear of the nation being overrun by aliens. The party evidently believes that such charges will help it in the forthcoming elections while its opponents seem to believe that the fear will make the minorities support the “secular” parties. To both the groups, the hapless individuals are nothing but electoral fodder.

On the other hand, there is no sign that the BJP is willing to recognise the difficulty of weeding out the illegals from the other citizens without creating a social upheaval. The task is made all the more difficult by the problem of distinguishing the Muslims of Bangladesh from the Muslims of Assam since there is little difference between them about their dialect and lifestyle, especially when the paper documents are not always reliable even where they are available.

To make matters worse, the focus of the authorities on those who speak Bengali tends to frighten even the Bengali Hindus in view of the fact that there had been a series of anti-Bengali riots in Assam in the 1960s. Not surprisingly, a section of the Bengali Hindus fled to West Bengal in search of safety during the anti-foreigner agitation of 1979-85.

The BJP also pays no heed to Bangladesh’s summary rejection of the possibility of accepting those whom India will like to evict since such an admission will detract from its political propaganda.

Yet, since the presence of the “aliens” cannot be wished away, a group of ministers (GoM) under the chairmanship of then Home Minister L.K. Advani had proposed in 2001 that they be given work permits, which will be their only valid document. As such, they will not be able to vote and cannot constitute the “vote bank” of any party.

Since illegal immigrants stoke the xenophobia of “nationalist” parties, it is a card which they are reluctant to forsake. It is not in India alone that the card is played. The compulsions are the same in Donald Trump’s America and among pro-Brexit Britons, not to mention the far right parties in Europe. The NRC controversy is likely to persist, therefore, at least till the 2019 general election.

(Amulya Ganguli is a political analyst. The views expressed are personal. He can be reached at amulyaganguli@gmail.com )