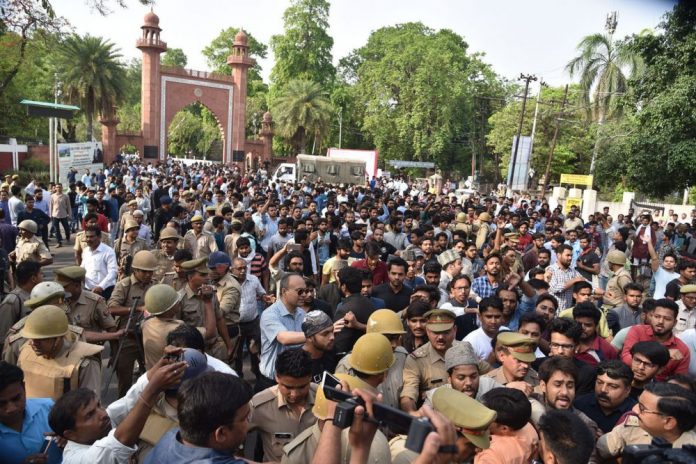 New Delhi : The Delhi chapter of the Aligarh Muslim University Old Boys Association (AMUOBA) on Monday demanded a “time-bound” judicial probe into the incidents that happened on the varsity campus on May 2 and action against the policemen who were allegedly “complicit” in the “politically motivated attack on the university”.

The body demanded “immediate arrest” of those who tried to attack former Vice President Hamid Ansari and barged into the campus “brandishing weapons and shouting provocative slogans, thereby leading to an extremely volatile situation”.

Ansari, who is also a former Vice-Chancellor of AMU, was visiting the varsity when the incident happened.

“The AMUOBA strongly condemns the attempt to disturb peace in AMU campus on May 2 by armed miscreants who also tried to attack former Vice President Hamid Ansari. The miscreants were allegedly members of right-wing Hindu outfit,” the university alumni body said in a statement.

“A time-bound judicial enquiry is also among the foremost demands. AMUOBA also demands action against the policemen who were complicit in what appears to be a coordinated and politically motivated attack on the university. In addition, the cases against AMU students must be withdrawn,” it added.

The association said it was deeply aggrieved by the “partisan role played by the Aligarh police and the brutal lathicharge on AMU students who were protesting the police inaction”.

The association issued the statement after a resolution was passed in its meeting on Sunday here. The resolution will be submitted to the President, it said.

“Since the incident involves breach of security with regard to one of the highest dignitaries of the country, we demand a time-bound judicial inquiry into the events on AMU campus on and after “May 2,” the resolution said.