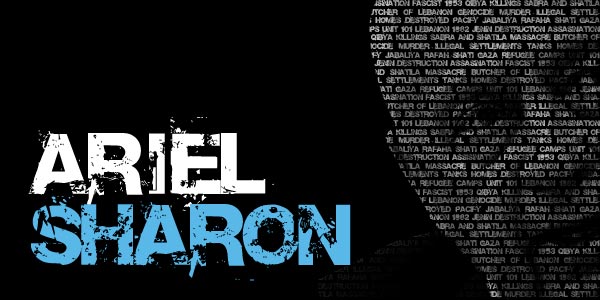 The Western politicians’ obituary statements at Sharon’s death – ‘good riddance’, said voices from the Left and the Right – was another plunge into darkness of the Crusade Era.

But who was Sharon? Here is a brief note on him picked up from a variety of sources – all Western:

“Early in his life, Sharon showed the dark side of his character. In an Israeli attack in 1953 on Qibya, a Palestinian village in the West Bank, led on the ground by Sharon, scores of homes were destroyed while civilians were still inside. The outcome was a massacre that left 69 Palestinians dead, most of whom were women and children. Then a ‘culture of impunity’ – a recurring theme – took over. Following that heroic event, as assured by the culture of impunity, “time and again, Sharon left some of the bloodiest marks on the history of Palestine.” He escaped accountability in Qibya and, despite heavy criticisms of his role in the Sabra and Shatila massacres (3,500 “refugees, men, women, children and infants), Sharon’s career in public life did not end, to ultimately become the Prime Minister (while some referred to him as ‘the Butcher of Beirut’).

Sharon emerged into the public arena as the leader of the notorious military squad named Unit 101 in the early 1950s. It was mainly engaged in terror attacks on civilians to extract “revenge” for Fedayeen attacks. Sharon was continuously promoted within the Israeli military’s ranks, willing to do anything his superiors wanted to carry out but didn’t want to be associated with. David Ben Gurion and Moshe Dayan merely needed to express some “wish” and Sharon would carry out the dirty work.

In the past half a century, there hadn’t been a boundary or a law that Sharon hadn’t broken or bulldozed through. In the 1970s, he was given the task to “pacify” resistance in the refugee camps of Gaza. Sharon ordered military bulldozers to carve a grid of roads wide enough for tanks to be able to drive through the dense fabric of three of Gaza’s largest camps – Jabalya, Rafah and Shati – destroying nearly one thousand homes. The new routes created smaller neighbourhoods, each of which could be isolated by infantry units.

Here, he translated the principles of the dynamic battlefield into civilian planning and erected the skeleton of Israel’s small settlement empire in the occupied territories. The aim of Sharon’s plan was to splinter and paralyse Palestinians in the West Bank and Gaza.

In his hands the suburban red-roofed single family homes replaced the tank as the basic battle unit; houses were deployed in formation across a theatre of operations to occupy hills, to encircle an enemy, or to cut its communication lines. The result was an interlocking series of settlements, roads, barriers, and military bases that splintered the West Bank into several isolated Palestinian cantons, each around a major city, with the connections controlled by Israel.

As defense minister, he led Israel into the Lebanon war in 1982, in which 20,000 Lebanese were killed as Beirut and the country’s southern coastal cities were reduced to rubble. Sharon wanted to construct a new Middle East in which Lebanon and Israel were allied and Jordan became a Palestinian state.

In the early 1990s, when he feared political progress toward peace, he called upon settlers to “move, run and grab as many hilltops as they can to enlarge the settlements…”

As Prime Minister in 2002, he ordered the building of the wall upon and through Palestinian lands in the West Bank, while re-occupying and destroying the major Palestinian cities and camps in the West Bank. The “Hausmanisation” of Jenin was a repeat of his 1970s strategy in Gaza, with tank routes bulldozed out of the densely populated fabric.

In 2005, a few months before a stroke put him in a permanent coma, Sharon removed 7,000 settlers from Gaza, and simultaneously settled tens of thousands of others in settlements across the West Bank.

Sharon was a central figure in the making of the architecture of occupation, composed of the combined structure of outposts, settlements, military bases and the tunnels and bridges of ethnically divided roadways. This architecture, a result of a five-decade process that transformed the Israel/Palestine frontier by incessant acts of destruction and construction, could never provide the ground for a just solution to the conflict.”

Such is a short description of the man, while much remains to be told. But with hearts inflamed in love (or hatred of some others?), senior Western officials representing their countries, were stamping each other’s feet at the obituary ceremony in their race to be the best in speech, best in hypocrisy, and the best to win the awards that would follow the adulation. Blair said, “He was a giant of this land.” (A truly humble statement from someone referred to by some of his own countrymen as the poodle of the American President!)

President Obama offered his condolence in words, “our deepest condolences to the family of former Israeli Prime Minister Ariel Sharon and to the people of Israel on the loss of a leader who dedicated his life to the State of Israel.” Was it the deep awareness of “wealth is power” that evoked the following from him, “We reaffirm our unshakable commitment to Israel’s security and our appreciation for the enduring friendship between our two countries and our two peoples?”

True to his character, former President George W. Bush was warrior-like (albeit on the disarmed). He said: “A warrior for the ages and a partner in seeking security for the Holy Land and a better, peaceful Middle East.” (That is, a M.E. kept permanently in turmoil, to gradually recede backwards, as nations move forward).

Ex-President Bill Clinton and his wife Hillary, a former secretary of state, said that Ariel Sharon had given his life to Israel and it had been “an honour to work with him, argue with him, and watch him always trying to find the right path for his beloved country”. (They must have thought it bad diplomacy to add the words, “with our massive help and eight score vetoes.” They must have said, “trying to find the right path (with our trillion dollar help and score vetoes) for his beloved country.”

What about a country where hundreds of billions have been invested? Russian President Vladimir Putin said that the late Israeli leader had been a great friend of Russia. He praised what he had done to protect his country’s interests.

Such were the Western sentiments. But, who should be believed: the living or the dead? Let us not go as far back as to the times of good old Ford. But a recent former President of the US wrote in his private diary in 1980 about Sharon, “the bad guy who seemingly looks forward to a war.”

The Human Rights Watch said Ariel Sharon had died without facing justice for the massacre at Sabra and Shatila. An Israeli commission of inquiry found him personally responsible for failing to prevent the massacre.

Wrote Professor Francis A. Boyle, an international law expert: “The United Nations General Assembly condemned the 1982 Massacre at Sabra and Shatilla as ‘genocide.’ So what the world is witnessing now are innumerable government leaders, politicians, pundits, professors, intellectuals, media figures and the State of Israel pay formal tribute to a genocidaire – one who has committed genocide.”

West’s disregard of honorable principles and policies, specifically from 1948 onwards, is pushing it to the ignoble status of a perpetrator of violence and destruction for small gains (sometimes in obedience of its moneyed master) which is rendering it low in the esteem of other nations. But, and despite the warnings from its own intelligentsia which time and again brings out books dealing with the oncoming tragedy, the leadership tends to remain deaf and blind. The culture and policy of provoking hapless people to violence seems to visit their own county now, their own culture, their own people. Here are news pieces picked up from a single media outlet during a 24-hours cycle:

(2) A Maryland mother stabbed two of her children to death and wounded two others while attempting an exorcism.

(3) A San Antonio man confesses to the brutal strangulation murder of an out-of-town visitor  after the two males engaged in a sexual act, and the other man told him that he had just, “infected him with a virus known as AIDS.”

(4) Myls Dobson was just a 4-year-old boy upset that his dad wasn’t coming home. What he didn’t know was that his father was in jail on bank fraud charges. When he grew upset and despondent, his father’s girlfriend, a 230-pound, 28-year-old transgender woman beat and tortured him, burning him with a hot grill, striking his genitals repeatedly with a belt buckle and locking him outdoors on a terrace in a Midtown Manhattan apartment on a record-cold day – until he died.

(5) A gunman shot a college student sitting in the parking lot of Widener University’s athletic center. The student was shot once in the side by an unknown gunman.

(6) A Purdue University engineering student opened fire inside a basement classroom, killing a teaching assistant and prompting officials to put the campus on lockdown.

This – which does not cover the entire country – is from a single news outlet, covering a day’s flashes. But, does the West, and in particular USA, realize that when you promote a culture of violence by leaving no other option for the weak to protest but with violence, then, “what goes round, comes round.”

Have the Leaders Failed the Ummah?

The problem of a definition of terrorism starts from powerful countries, which stubbornly refuse to …