Few years back I met with Arif Mohammad Khan sb at his magnificent bungalow at the upscale Mayfair Garden, Hauz Khas area in New Delhi.I was really impressed with his generous hospitality. During the conversation, I was perplexed by some of his interpretation of Islamic terminology. That’s ok. But I was really shocked when he said ‘Muslims should keep away from politics’. He is a man who got  much more from politics than any other means but now he is strangely advising Muslims to keep away from ‘politics’. Whatever status he enjoys today in the society that is because of his political career.

A leader is tested during the time of crises. When the community was feeling the heat of Supreme Court judgment on the Shah Bano case and the matter came before the parliament, Mr Khan miserably failed to explain the Islamic interpretation of Triple Talaq in the House; above all he misrepresented Islamic teachings and misled the parliament and the whole nation. He went against Islamic belief, took a stand which was against the interest of the community and against the Muslim Personal Law Board. He didn’t bother about  the sentiments of the community and  resigned from the ministry protesting against  Prime Minister Rajiv Gandhi-led  Congress Government stand on the Shah Bano issue and later he even advocated abolishing of Muslim Personal Law Board.

The issue of Triple Talaq is still alive due to his deliberate misinterpretation and distorted explanation of the Triple Talaq.

Like crores of Muslims, I am also against Instant Triple Talaq, but that doesn’t mean I will stand  with RSS and anti-Muslim forces who use Muslim personal law or Triple Talaq issue for Muslim bashing as  my intention is restraining people from its misuse but their intention is ‘to defame Islam and demonize Muslims ’.

When the controversy over the singing of Vande Mataram started he openly came out in support of RSS, appeared on TV channels and gave strange explanation of the song and again came up with his own ‘interpretation’ and ‘explanation’ and tried to justify it from ‘Islamic’ point of views only to appease RSS.

His love-affair with RSS is an open secret. He had been very close to the ideology RSS and its ideologues. Most of his articles were published in The Organizer, the mouthpiece of RSS.

When Arif Mohammad Khan joined the BJP he gave his own justification.

In an interview to a Hindi daily he said ‘Above all I want to make strong bond with RSS in comparison to BJP, I am with the ideology of Sangh, I want to earn the GOOD WILL of RSS, that’s why I decided to join BJP formerly. In the same interview he explained that he had decided to join BJP ‘to bridge the gap between Hindu and Muslim community’. (Daink Jagran , 21st Feb 2004). 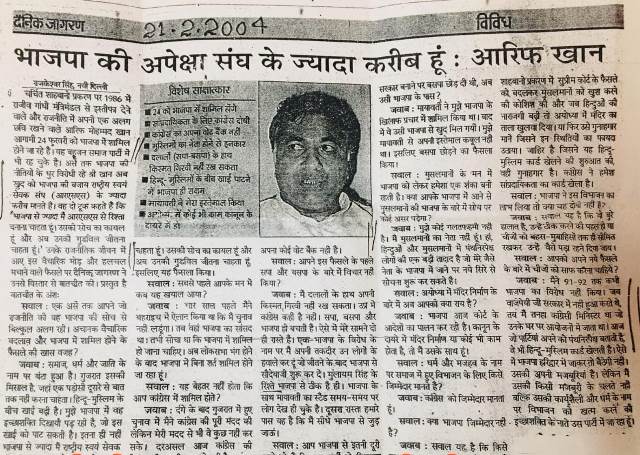 It’s still a secret how far he succeede in his efforts.

Can an individual change of influence the ideology of an organization which harps on anti-Muslim and anti-Christian sentiments to realize its dream of imposing Brahimincal order in India?

RSS is a an ideological movement  and it can be countered  only by a movement  but  an ‘intellectual’ and ‘scholar’  like Mr Khan tried to stop that movement through APPEASEMENT.

An active member of RSS think-tank Vivekananda International Foundation, Khan started Samarpan, an NGO for physically challenged people but gave the distributiorship to an RSS affiliate NGO apparently to appease RSS bosses or to make RSS activities acceptable among the masses.

He was in BJP, he tried to get an assembly ticket for his wife unsuccessfully, and his in-laws are  already in BJP.

When Narendra Modi became PM, Mr Khan termed him as the ‘Man of the Moment’ and the ‘Need of the Hour.

Did Mr Khan open his mouth against mob lynching of Muslims?

Arif Mohammad Khan was the first person to resign from Congress against allegedly corruption involved in Bofors deal. Did he speak against Rafael deal?

Arif Mohammad Khan, who always believed in self-promotion and self-projection   is of the most unpredictable and self-centered politician of Indian politics. The ‘visionary politician’ who is known for putting  his ‘personal interest’  before everything , had never been committed to the  political parties  he had been associated with  and kept changing his loyalties only  to protect his political interest. He started his career form Congress but tasted the ‘power’ in different political parties e.g. Janta Dal, BSP, and BJP.

He is one of the wealthiest Muslim politicians who is known for introducing corruption in BSP. In 1996 he purchased 24 Assembly tickets from BSP supremo and distributed among his loyals.

He took the stand of Mukhtar Abbas Naqvi  and used his language  on issues related to Muslims like Triple Talaq or Vande Mataram, but still he is being projected as Messiah of the Muslim community.Unlike  Arif Mohammad Khan , Mr Naqvi is still loyal to his political party

Mr Khan was never loyal to his religious belief, his culture, his community or the political parties he represented.

Now at the end of his career he wants to do something for Muslim community, and he came out with a vision-document which he intends to implement through India Islamic Cultural Center (IICC). But looking at his background and his unpredictable nature, his selection as the president of IICC might be a catastrophe for the Center.

‘Change’ is good, but it should be for ‘better’ not for the ‘worst’.