Aslam Basha – An incomplete journey but a contended soul

The dawn on 21/07/2020 had set the hearts of thousands of Muslims of Tamil Nadu in despair as the news of the demise of Aslam Basha, former Member of the Legislative Assembly of Ambur Constituency in Tamil Nadu unfurled. The general masses, community activists, the Muslim Political leadership in general and the leadership of Manitha Neya Makkal Katchi ( Humanitarian People’s party) had high hopes on  Aslam Basha a state Organising Secretary  of Manithaneya Makkal Katchi and  an active volunteer in assertion of community rights. Though it is obvious that every soul must depart, and Aslam Basha would have departed as a contended soul his journey would be incomplete for his death has failed the hopes of several men. His demise at a young age of 52 had crashed all hopes and expectations despite his good deeds having sowed seeds of hope.

A man of the masses he rose from grassroots to the top leadership of his party. He strengthened the party in his home – town Ambur and the entire Vellore district before being elected as the legislator of Ambur. As the first legislator in the 14 th General Assembly of Tamil Nadu (2011-2016) of the newly created Ambur constituency he had negotiated the development of his constituency, safeguarded the interest of the state, and defended the rights of the community.

The people of Ambur fondly remember him for his record breaking services to the constituency. He ensured that long pending demands of the constituency are approved by the legislature and executed by the government. The Maligai Thoppu to Thuthipet road bridge connecting the main town Ambur with its suburb was a prolonged aspiration of the people of Ambur which was ensured because of Aslam Basha’s ability to convince the legislature and potentiality to handle the government machinery. A Sub Registrar Office and a Regional Transport office in Ambur stand testimony to his efficiency as a legislator. V.R. Naseer Ahmed, Tiruppattur District Secretary of Tamil Nadu Muslim Munnetra Kazhagam recollected that Aslam Basha’s monumental achievement was getting the Reddithope overbridge sanctioned,    though it has been sanctioned the bridge work has not started. Naseer Ahmed asserted that our real tribute to Aslam Basha Saheb would be to ensure that his dream of the Reddithope bridge becomes a reality.

Once K.V. Ramalingam a minister in Selvi J. Jayalalitha’s government while replying to a debate for the demand of grants of his Ministry  made a statement that Muslims worship Prophet Muhammad/ It is a tradition in the Assembly  that no members should react when a Minister is replying after the conclusion of the debate for grants to his Ministry. However  Aslam Basha immediately roared in the Assembly pin – pointing the blunder the minister was committing and demanded the remark to be expunged. The then Chief Minister Selvi J Jayalalitha had to intervene and request the Honourable speaker to remove the inaccurate comment made by her minister. Like – wise Aslam Basha had been vociferous in the Assembly to safeguard the interest of the state.

The cadres of Manithajeya Makkal Katchi fondly recall his loyalty to the community and his party. The 14th Tamil Nadu Assembly witnessed a rare phenomenon when a split was manipulated in 3 out of 4  small parties with 2 members of legislatures by the ruling AIADMK government in its favour with the exception of Manithajeya Makkal  Katchi it was generally expected that Aslam Basha would also ditch his party and leader to join over the ruling government. Inspite of all incitements and pressure from the ruling dispensation Aslam Basha turned out to be a trustworthy lieutenant of his leader and a faithful soldier of the party. 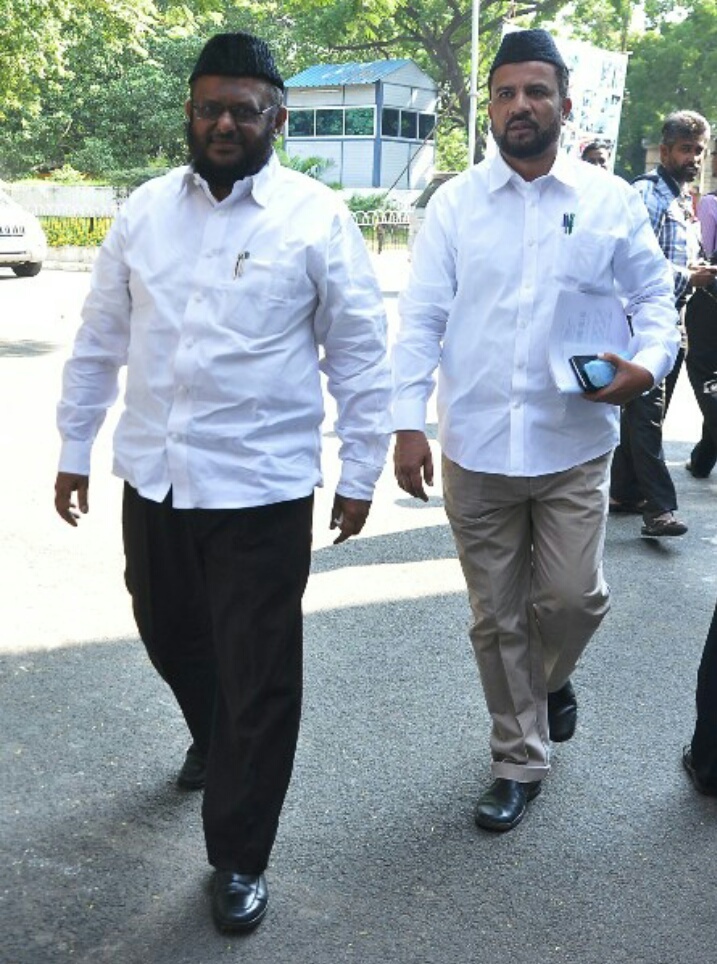 A distressed Dr. M. H. Jawahirullah affirmed “Our relationship is unique for Aslam Basha was my student, then a cadre, a friend, a party leader, a colleague and by the time he departed he had become a brother. It is a irreparable loss to me personally and also to the community.

Aslam Basha is survived by his wife, a daughter, and a son. Let us join together in prayer to the Almighty for showering His blessings on the departed soul by granting him the choicest place in heaven and also to provide the bereaved family and friends solace.