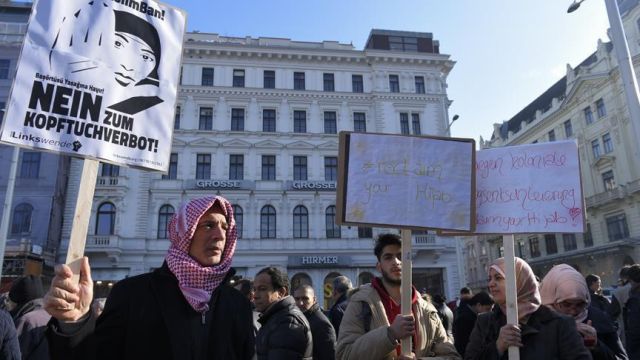 Vienna: Austrians have reacted to a plan by the education minister to expand the headscarf ban for students and teachers to secondary schools.

Education Minister Heinz Fassmann said on Monday that the issue should be discussed throughout the country, especially in the parliament.

However the ban is not related to the number, it is related to its content, he said.

The ban should be put in force for free education and protection of girls, Fassmann added.

“It is not just me and the ministry,” Fassmann said, adding political parties, especially the parliament, must express their view on the headscarf ban for secondary schools and build a social consensus.

Journalist and writer Wilhelm Lagthaler told Anadolu Agency that systematically misguided politics over the decade have produced a racist and discriminative attitude against Muslims who have been living for a long time in Austria.

Immigrants, refugees, and Muslims have been blamed for all problems in the country, Lagthaler said.

Choosing what to wear is “a basic human right,” he said. “I am against wherever there is a pressure to wear or remove the headscarf.”

Lagthaler also said that teachers are civil servants representing the government. “Teachers working with a Muslim identity belong to the Islamic religion, which is part of this country,” he added.

“Naturally, it is normal for them to work with their own identities at any stage of the state,” he said, giving the example of Sikh police officers working in India with a turban.

He added that this attitude against Muslims is an approach that violates fundamental rights and shakes the foundations of harmony and peaceful coexistence in the country.

Austrian activist Markuz Schulz said that the far-right government in the country is trying to cover up the real problems of the society with such issues as the headscarf ban, imams, political Islam.

Schulz said that teachers and students are excluded from education and training under the pretext of a headscarf ban. “This has nothing to do with adaptation,” he added.

Another activist Michael Probsting blamed the far-right government of having a racist and Islamophobic attitude towards Muslims, which is an important minority group in the country.

“A headscarf ban is a violation of human rights, religious rights, and free-thinking,” he said.

“I am not a Muslim, but the issue is not related to who has which religious view. The question here is the freedom of people to live in the direction of their beliefs and a headscarf ban means trampling on this right,” he added.

Austria’s new coalition government, consisting of the far-right Freedom Party and center-right Austrian People’s Party, is aiming to create a draft law to ban young Muslim girls to wear headscarves in kindergartens and primary schools; a culture which they say is alien to the country.

More than 600,000 Muslims live in Austria, where Islam has been one of the officially recognized religions since 1912, making up seven percent of the population, according to figures obtained from the Vienna Islamic Federation.