Breaking News
Home / Muslim Mirror / Azadi : A sentiment that has consumed over one lakh Kashmiris and 4000 Indian soldiers

Azadi : A sentiment that has consumed over one lakh Kashmiris and 4000 Indian soldiers 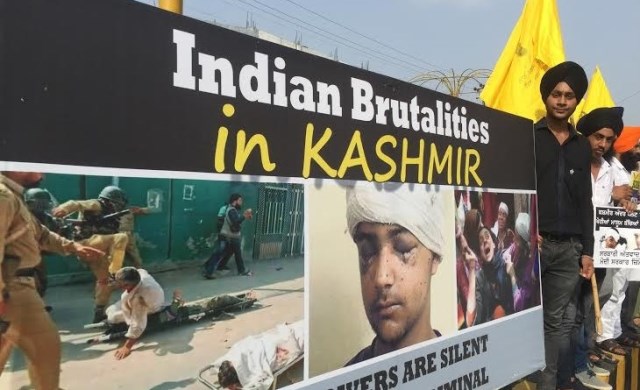 Azadi  is a Persian word  meaning freedom or liberty. The term has also entered into the lexicon of activists involved with refugee rights, and the rights of the mid-eastern diaspora in the western world, and undoubtedly in Kashmir’s call for right to self determination.

According to local Rights groups some 100,000 people have died since 1989 while the official figures from Indian sources state the estimates of number of civilians killed due to the insurgency in the range of 16,725 to 47,000 civilians, in which 3,642 civilians were killed by security forces. India accuses the Pakistan Army for abusing human rights in Jammu and Kashmir by violating the ceasefire and continuing to kill Kashmiri civilians, a claim which is totally rejected by Pakistan who blames Indian army for the violation of LoC.

Diplomatic cables obtained by WikiLeaks revealed that the ICRC had briefed US officials in Delhi in 2005 about the use of torture from 2002–2004 by security forces against hundreds of detainees suspected of being connected to or having information about militants.

Around 4000 Indian soldiers have also been killed in militant attacks in the valley.

Many research groups believe India has committed a genocide of Kashmiri Muslims to quell their uprising. In a 1993 report, Human Rights Watch stated that Indian security forces “assaulted civilians during search operations, tortured and summarily executed detainees in custody and murdered civilians in reprisal attacks”; according to the report, militants had also targeted civilians, but to a lesser extent than security forces.

Rape was regularly used as a means to “punish and humiliate” communities and was used as a weapon of war by the state against the population. A 2010 US state department report stated that the Indian army in Jammu and Kashmir had carried out extrajudicial killings of civilians and suspected insurgents. The report also described killings and abuse being carried out by insurgents and separatists. In 2010, statistics presented to the Indian government’s Cabinet Committee on Security showed that for the first time since the 1980s, the number of civilian deaths attributed to the Indian forces was higher than those attributed to insurgents’ actions.

The Indian Army claims that 97% of the reports about the human rights abuse have been found to be “fake or motivated” based on the investigation performed by the Army.However, a report by the US State Department said, “Indian authorities use Armed Forces Special Powers Act (AFSPA) to avoid holding its security forces responsible for the deaths of civilians in Jammu and Kashmir.”

The Telegraph, citing a WikiLeaks report, quotes the International Committee of the Red Cross (ICRC) that Indian security forces were physically abusing detainees with beatings, electrocutions and sexual interference. These detainees weren’t Islamic insurgents or Pakistani-backed insurgents but civilians, in contrast to India’s continual allegations of Pakistani involvement. The detainees were “connected to or believed to have information about the insurgents”. According to ICRC, 681 of the 1296 detainees whom it interviewed claimed torture. US officials have been quoted reporting “terrorism investigations and court cases tend to rely upon confessions, many of which are obtained under duress if not beatings, threats, or in some cases torture.”

Amnesty International accused security forces of exploiting the Armed Forces Special Powers Act (AFSPA) that enables them to “hold prisoners without trial”. The group argues that the law, which allows security to detain individuals for as many as two years “without presenting charges, violating prisoners’ human rights”.[37] The Army sources maintain that “any move to revoke AFSPA in Jammu and Kashmir would be detrimental to the security of the Valley and would provide a boost to the terrorists.”