New Delhi : Majlis-e-Ittehadul Muslimeen chief Asaduddin Owaisi Asaduddin on Wednesday said that if family members of the Mecca Masjid blast victims wish to contest the verdict, he would provide all sorts of help including the legal assistance. “If the family of any victim wants to appeal against the verdict, then I am ready to provide them legal help. People call NIA a caged parrot, but I will say that it is blind and deaf also,” news agency ANI quoted the Hyderabad MP as saying.

However, what goes unnoticed is how Owaisi a decade earlier had on his own declared certain Muslims responsible for the Mecca Masjid attacks. Owaisi had declared Bilal -the India chief of the Harkat-ul-Jihad-al-Islami (HuJI)- behind the terror attacks . 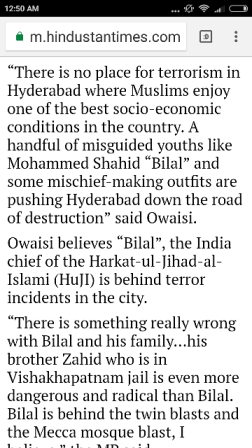 Back then in 2007 Owaisi in an interview to Hindustan Times he had said “There is no place for terrorism in Hyderabad where Muslims enjoy one of the best socio-economic conditions in the country. A handful of misguided youths like Mohammed Shahid “Bilal” and some mischief-making outfits are pushing Hyderabad down the road of destruction.”

“There is something really wrong with Bilal and his family, his brother Zahid who is in Vishakhapatnam jail is even more dangerous and radical than Bilal. Bilal is behind the twin blasts and the Mecca mosque blast, I believe,” the MP had said.

Owaisi may now choose to remain silent on the issue but his statements are well documented.

Mecca Masjid case may have culminated with acquittals to all accused, but what goes unnoticed is that as many as 100 Muslim youth were lodged in prisons for years  together soon after Macca Masjid bomb blast in May 2007.

The Special Investigation Team (SIT) constituted by the then city police chief Balwinder Singh ordered  probe into the case which was led by H. K. Gupta, the then joint commissioner of police of the city, picked up scores of Muslim youth based on suspicion and booked cases against nearly 100 youngsters and remanded them to judicial custody.

Back then in an embarrassment to the administration and police, the youth had to be later released after involvement of right-wing Hindu nationalists came to the fore. The government was forced to pay compensation to the Muslim youngsters who were fraudulently framed and letter released after so many years In jail.

No righwirigh terrorist was convicted even after Assimanand’s confession before the magistrate. The public prosecutor (  an RSS man  ) completely failed to provide evidence before the court.

Why Has India Stopped Talking to Pakistan? Hamid Ansari Explains | The Quint

What does the Press Release by All India Muslim Personal Law Board on Ayesha suicide say?