Bheed (Maharashtra): Massive protests in different cities against the release of 11 convicts in Bilkis Bano’s case

Over 6000 women staged silent protest march in Beed city of Maharashtra against the release of 11 convicts in Bilkis Bano’s case last week.

Since the govt has passed the order on 15 August of release of 11 convicts of the Bilkis Bano murder and gangrape case of 2002 under it’s ‘remission and premature release policy’, protest march, signature campaign etc have been held at several places of Maharashtra state by the progressive activists of across sections of society.

Thousands of women and students and male social workers took to the streets  from Kila maidan and marched against the bigoted stance of the central govt.

Women carried placards in their hand, with slogans “We are the people of undivided India and we will not tolerate injustice ” we will not allow injustice to the oppressors” we are united” etc. 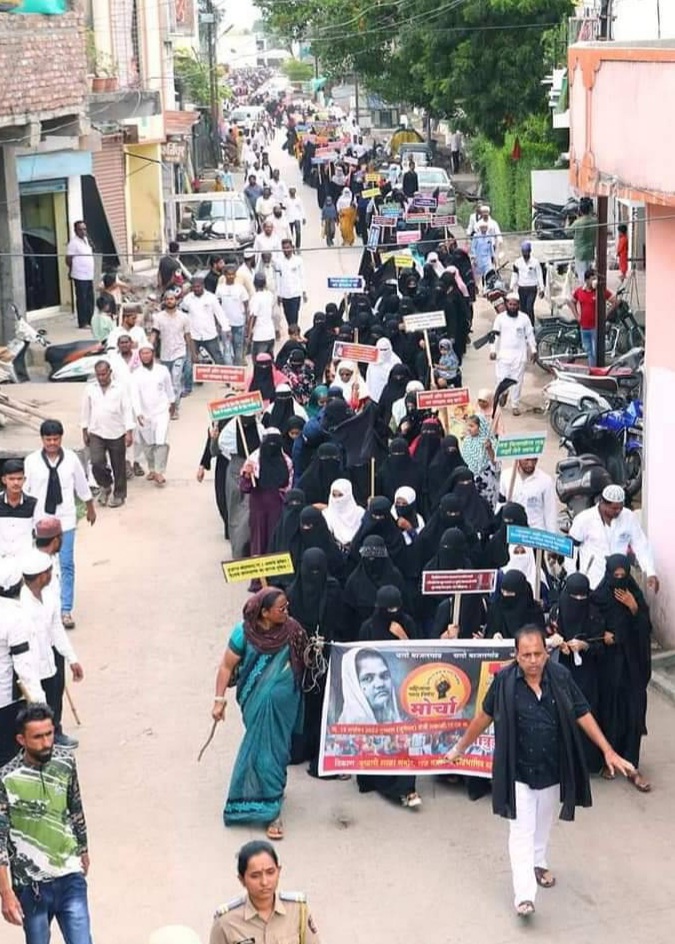 A memorandum addressing President of India, was submitted through the Dist. collector.

“We would like to express our feelings and demands regarding the recent events to the Honorable President of India Draupadi Murmu.The sentiments of the minorities were hurt and the secularism of the country is under threat” said the memorandum.

It demanded to enact anti blasphemy law and reverse the remission of Blikis Bano case gangrape and mass murder convicts.

It further added, In this regard, we appeal to you as the custodian of the Constitution of India,to

Intervene and call on the government to initiate action  to curb hate speeches,It added.

We demand immediate release of Maulana Kaleem Siddiqui and reconstruction of Madrasas.  And tougher action  should be taken  against  mob violence and other hate crimes, it adds.

Women and students also led this march actively and addressed the gatherings. During the march, youths of the city made human chain in order to protect and maintain descipline.

We were there to condemn the disheartening decision of  Gujrat govt and stand by Bilquis Bano, Adv.Sayed Asima told Muslim Mirror.

Our prime Minister stresses on women’s safety but it is quite disappointing that in his home state this outrageous decision has been made, added Asima.

Omair Saleem, Beed city social activist informed that people from all the political parties, Jamaats and NGOs came under one Umbrella and volunteer their services.He said that during the entire march,police administration took good security measures.

Additional Superintendent of Police Mr.Sunil Lanjewar along with other senior officers and hundreds of police personnel were present.

In Ambajogai Taluka obver 1000 women joined protest march organised by Fikre Millat ,Tahaffuz Dastur Hind, Committee which began from sadar bazar and reached to deputy collector office to submit Memorandum, informed Mujeeb Qazi, a social activist.He said that participation of home makers was over whelming, we must thanks our brothers for making other arrangements.

Resident of Amba Jogai and participant of the march, Qazi Mah Jabeen Farooqui said that we have secularism and respect for each other’s religions  in our Indian soil ,women are considered as Devi Maata etc. But it is heart wrenching to see that rapists are being released and some trouble makers are putting question marks of dignity of religious  iconic personality.

Mah Jabeen further said that we need humanity and sensitivity first  to move forward on the path of development.