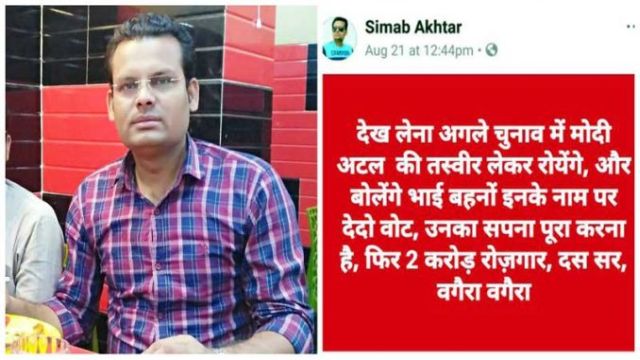 Patna : An FIR was filed by an Urdu daily journalist here after he was threatened with death for a social media post that Prime Minister Narendra Modi would seek votes in the 2019 general elections in the name of former Prime Minister Atal Bihari Vajpayee, a police official said on Friday.

According to Akhtar, he received threat calls and was asked not to post anything against the Bharatiya Janata Party on the social media. “I was threatened with death if I continued to write against the BJP.”

Bajpatti police station incharge Kanchan Bhaskar said that an FIR had been filed.

Sanjay Kumar, a Professor at Motihari Central University in east Champaran district, was beaten up by a group of people last Friday for his comments on the social media that appeared to criticise Vajpayee. A seriously injured Kumar was first admitted in Patna hospital, but later shifted to AIIMS in Delhi.