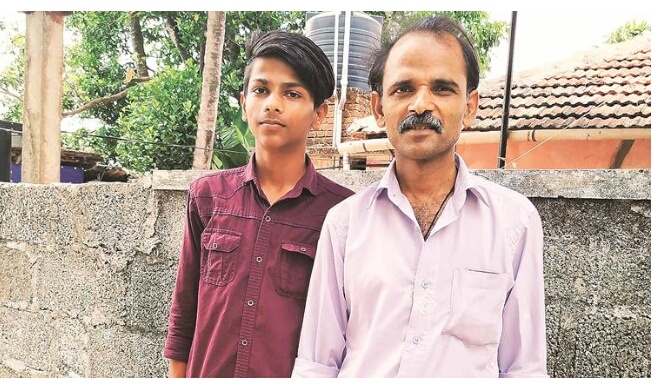 In a news that accentuates how hardwork pays off irrespective of social or economic background,  Mohammad Dilshad son of Bihar migrant laborer Bhutto Sajid has topped in  Malayalam-medium government school class 10 results, by securing A+ grade in all subjects.

Born into a poor peasant family in Bihar’s Darbhanga, Dilshad’s father didn’t have the financial means to go to school. Doing odd jobs, first in his village and then later in Delhi, Sajid was among the first wave of migrant workers in 1999 travelling thousands of miles to Kerala, a state grappling with a shortage of labour after its own people left in droves looking for jobs in Gulf countries.

“Hum gareeb the, nahi padh paye. But mera beta mera sar uncha kar diya (We were poor so couldn’t study. But my son has made me proud),” Sajid said in an interview to the media.

Following Dilshad’s achievement in the results, Sajid, his wife Abida and the teachers as well as the Binanipuram Government High School are incessantly receiving congratulatory calls from government quarters and the media.

Among his teachers, Dilshan’s mathematics teacher at the school, Sudhi TS, who took a special interest in Dilshad’s studies, said that Dilshad’s performance has made him happier than the performance of his own son who also sat in the board exams this year.

“I used to tease my son by telling him that Dilshad would score better than him. That would get him jolted and serious about studying,” the daily quoted him as saying.

“In fact, I had the opportunity of a transfer to another school here two years back. I have an asthma condition and this is an industrial area. But I stayed on just to help him (Dilshad) out. I wanted to see him do well in the exams because he has a bright future ahead,” said Sudhi, adding that he would often fix special classes at 6 am in the morning for Dilshad’s batch.

Share
Previous The First Friday of Ramzan
Next What Ramadan means to Muslims: 4 essential reads