New Delhi:  The women of Delhi, as citizens, individuals and members of women’s groups on Tuesday felicitated 82-year-old Bilkis Bi , one of the ‘Dadis’ of Shaheen Bagh, listed among the 100 most influential people of 2020 by  the ‘Time Magazine’. Describing the Shaheen Bagh protest as a movement about equality and love, Bilkis Dadi demanded that Delhi Police must stop ‘maliciously targeting’ all equal citizenship protestors in the garb of the Delhi riots. She also expressed solidarity with the agitating farmers who are on streets protesting over anti-farmer laws passed by the government.

At a packed, though fully Covid compliant Press Conference at the Press Club of India, Bilkis dadi was felicitated by the representatives of women groups who said Bilkis and the Equal Citizenship Movement that started at Shaheen Bagh, have become powerful global symbols of peaceful resistance.

On the occasion, the woman of the hour, and the woman of the movement, Bilkis Bi recounted the Shaheen Bagh anti-CAA/ NRC sit-in protest for over three months braving the coldest winter in over a century.

‘This movement was about mohabbat (love) and barabari (equality).” “Why” she asked, “are our young people being put in jail because of it? This is their time to study and learn,” she said.

She also said, “This was not a battle I fought alone, it was a shared struggle, and it continues to be shared.”

“There is so much for the government to do – for the future of our country, for the farmers, to fight hunger, but they are doing this instead… Today Covid is the bigger disease. When that is overcome, then the disease of the CAA-NRC must be combated. The struggle for equal citizenship will continue,” Dadi averred. 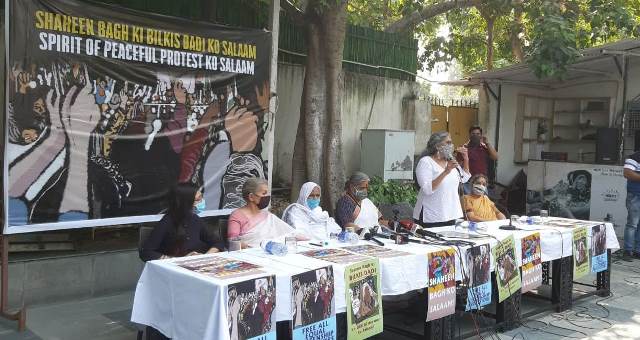 On farmers’ agitation, she said “Government has so much to do for the future of India –for farmers, for hunger. Those should be their concerns, and those are my concerns too, she further said.

The women representatives opined that Shaheen Bagh was the largest, most peaceful, women-led movement for democratic rights in Independent India.

“We are proud that Muslim women led these protests, in the best traditions of our freedom struggle. Something resonated in the soul of India, which is why in over 200 places, women sat on our streets to be heard, and be visible as equal citizens,” they added.

“Yet, an embedded media tried to malign us by saying that women were being paid 500 rupees to sit in protest. Now, the Delhi Police have emulated that shameful effort, to demean, and target this movement and all who stood with it. In its charge sheets, peaceful women have been portrayed as rioters who hid knives under their burkhas, and carried mirchi powder to spread violence.”

In her opening remarks Vani Subramanian, said, “The event today is because this was our shared struggle. And women across India continue to be inspired by Bilkis Dadi and Shaheen Bagh.”

Vani further said that Bilkis should have been honoured by her government, and felicitated by corporate houses too.

Speaking in similar vein, Dr. Syeda Hameed underlined that “the history of the freedom struggle shows that Muslim women are not the way they are constantly projected. They have independent minds and are capable of leadership, and that is what Shaheen Bagh exemplified.”

While proudly acknowledging Bilkis Dadi as her compatriot, Annie Raja   expressed her outrage at Delhi Police’s malicious investigation. She accused the Delhi police of twisting the peaceful movement for Equal Citizenship, against the CAA-NRC into some sinister conspiracy to cause the terrible Delhi riots.”

She said, “The women of India would fight against this attempt to criminalize our movement, against this projection and against the CAA-NRC.”

Journalist Bhasha Singh, who said she had travelled the length and breadth of India during the equal citizenship movement, said, ‘this was not a struggle about Muslims alone. I have gone to so many protests in India, and this struggle was across religions, classes, generations and regions. Something resonated in the soul of India, and women sat on our streets to be heard, and be visible as equal citizens. This is what women’s empowerment is about.”

Patriarchy cannot accept this reality, she added, so they are criminalizing it.”

Professor Poonam Batra, Delhi University, said she had visited Shaheen Bagh as part of a team to understand it from the perspective of children, after an anonymous complaint made to NCPCR claimed that children were not safe at Shaheen Bagh.

Prof Batra underscored that “I have not seen a space in a movement that was more safe, more inspiring and more educational for the children.

Adding to this, Vertika Mani said that she had learnt so much from Shaheen Bagh.