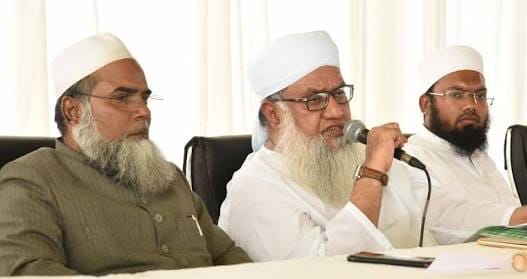 New Delhi: Putting the ruling BJP and its mentor RSS and BJP in a fix over the homosexuality issue, the All India Muslim Personal Law Board (AIMPLB) lambasted both the organizations for politicizing the Sharee panchayats or ‘Darul Qazas’ what they call it “Shariat courts” in order to exploit the susceptible section of the society and to divert the attention of people from the utter “failures” of their government. The Board also vowed to defend the Nikah Halala and polygamy saying it is the ‘integral part’ of the Muslim personal law.

The working committee of AIMPLB which met here Sunday stated that “the board reiterated its stand that Darul Qazas are neither courts nor a parallel judiciary system but they are mediation, arbitration or counselling centres where various family, domestic, marital disputes are resolved and women approach these centres especially from poor sections of society for resolving their problems and disputes.”

On the issue of media hype, Zafaryab Jilani, member of the AIMPLB, said that BJP and RSS were “politicizing” the matter for petty political gains as they do on matters related to the Muslim community.

The working committee of AIMPLB also asserted that ‘Darul Qazas’ were not parallel court system and these counseling centers help to take the burden off courts where hundreds of thousands of cases are still pending, he said.

He recalled the judgment of the Supreme court delivered on July 7, 2014, on a petition filed by a Vishwa Hindu Parishad lawyer Tirlochan Singh challenging the validity of ‘Darul Qazas’. Jilani said in its judgment the apex court has ruled that Darul Qazas’ are not courts and their decisions are ‘advice’, not binding. Both the parties are free to go to the court.

Board’s working committee urged the countrymen that they should not be swayed by the misleading propaganda of a section of media which has been serving the cause of the ruling party dutifully.

“Darul Qazas should not be branded as ‘parallel courts’, instead they are supporting to the judicial system, and they lower the burden on the judiciary. Millions of cases are pending in the court because of the dearth of judges; in these circumstances, the Darul Qazas work and function by reconciliation between two parties.”

On the issue of decriminalizing unnatural sex, the Board also urged the government not to take a neutral stance on the issue as it is against religions, traditions, and ethics of this country.

“This committee meeting expresses serious concern regarding the appeal against article 377 in Supreme Court which is to decriminalise gay marriages. This is highly injurious to family and Society and all religions prohibit gay sex and marriages. The board appeals to the government to take a strong stand against decriminalisation in court.”

The Centre on July 11 told the Supreme Court that it would leave it to the wisdom of its judges to decide on the constitutional validity of Section 377 on the issue of criminalizing unnatural intercourse between two consenting adults.

Working Committee also passed half a dozen some resolutions including on the pending Babri Masjid case, Law Commission’s questionnaire on uniform civil code and others issues. The meeting was presided by Maulana Jalaluddin Umri (President Jamate Islami, Vice President AIMPLB) as the president AIMPLB Maulana Rabey Hasani could not attend come to Delhi due to ill-health.