BJP will try to derail everything with some surprise attack: Arundhati Roy 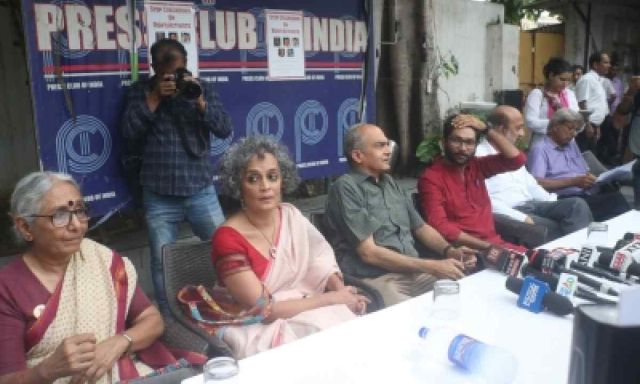 New Delhi : The arrest earlier this week of civil rights activists was carried out to “Divert and Rule”, writer-activist Arundhati Roy alleged on Thursday and expressed fear that in the run up to the 2019 general elections, the Bharatiya Janata Party (BJP) will “try to derail everything” with “some surprise attack”, urging people to hold the government accountable for its actions.

Launching a series of attacks on the Prime Minister Narendra Modi-led NDA government, the Booker-winning novelist and activist at the forefront of many social and environmental struggles, asked the people to not allow their “attention to stray from even when strange events befall us”.

“Modi government is following divert and rule. We will not know from where and how and when and what kind of fireball is going to fall on us. They are trying to distract us,” Roy said at a press conference here to condemn the arrests, before firing a series of salvos that targeted the government on its “anti-dalit” “anti-poor” “anti-minority” policies such as demonetisation and the introduction of the Goods and Services Tax (GST).

“While the poor have suffered enormously, several corporations close to the BJP have multiplied their wealth several times over. Businessmen like Nirav Modi and Vijay Mallya have run away with thousands of crores of public money while the government looked away,” Roy alleged.

“He (Modi) said that every man and woman will get Rs 15 lakh in his account if the BJP comes to power in 2014. On the contrary, poor of this country have been robbed. What kind of accountability can we expect from this government?” she asked.

Roy pointed to the investigation by the Karnataka Police into the assassination of firebrand journalist-activist Gauri Lankesh and said that it has “unveiled several Hindu right-wing organisations like the Sanatan Sansthan”.

“This has shown the existence of a full blown terror network with hit-lists, hideouts, safehouses, arms, ammunition and plans to bomb, kill and poison people… As it prepares for the 2019 general elections, the BJP has emerged by far the wealthiest political party in India. Outrageously, the electoral bonds ensure that the source of the donations to political parties can remain anonymous.

“How many of these groups do we know about? How many of these are still working in secret? They have the assurance and blessing of the powerful and even the police. With the elections coming what plans do they have in store for us? What surprise attack, where will they be, in Kashmir, in Kumbh mela, or in Ayodhya. They will attempt to derail everything with some minor or major attack,” Roy alleged.

Referring to the “manner in which the education institutions are being dismantled”, she said that the government is carrying out “re-brahmanisation of education” by rapid privatisation.

“Even the poorest beneficiaries of reservation are now being denied and pushed out at an alarming rate. This turning over of the educational institutions to the corporates is going to create a level of patronisation that we cannot recover from,” she said.

She termed the arrest of the five activistsas “illegal” and asked people not to forget that “by arresting public interest lawyers and human rights activists, the government is actually isolating lakhs of people because these are their representatives, the helpers of the poorest of the poor.”

“You are arresting and silencing those who work for the poor, you are stripping away the constitutional rights of whole population. When they arrested these people, it was their way of discrediting the dalit aspiration,” she said.