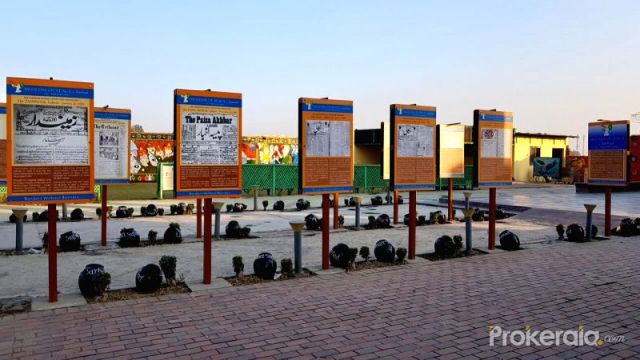 Attari (Punjab) : The important role played by the vernacular media in the country’s freedom struggle, which contributed to the end of the British rule in August 1947, has found a new platform right near the international border between India and Pakistan.

A new gallery of rare images of old vernacular newspapers of pre-Partition Punjab has recently been unveiled at the Museum of Peace at ‘Sarhad’ (border) complex, around two km from the Attari-Wagah border.

Titled ‘Pre-Partition Punjab – Vernacular Press’, the gallery displays issues of some of the oldest Urdu dailies of those times, including ‘Paisa Akhbar’, ‘Zamindar’, ‘Daily Inquilab’ and ‘The Akali (Amritsar)’.

The issues of these old vernacular newspapers, some of them from the 19th and early 20th century, have been sourced from archival sources in Lahore by a retired bureaucrat, D.S. Jaspal.

“The role of the vernacular press in pre-Partition Punjab and its critical influence on events leading to 1947 is a very neglected area of study,” Jaspal told IANS.

“By the first quarter of the 20th century, Hindus, Muslims and Sikhs had their own media which used nationalism as a platform to project and promote their identity interests,” Jaspal, who served as Secretary in Punjab’s Information Department for several years, pointed out.

Started in 1885 at one paisa per copy, ‘Paisa Akhbar’ blazed a new trail in journalism and by 1898 commanded the highest circulation of 5,000 copies.

‘Zamindar’, which started in Lahore in 1903 with a mission to project issues of farmers and landowners, eventually turned stridently nationalistic, projecting the Muslim point of view, which boosted its circulation to over 30,000 copies.

The first issue of ‘The Akali’ was published in Punjabi from Lahore on May 21, 1920. In October 1922, it merged with the “Pradesi Khalsa”, a daily run in Amritsar by Master Tara Singh, an extremely popular leader of the Shiromani Akali Dal who was a founding member of the Shiromani Gurudwara Prabandhak Committe, and shifted to the Sikh holy city, where it was published in Urdu-Persian script. Master Tara Singh, was its Editor.

The language of the earliest vernacular papers like “Paisa Akhbar” and “Zamindar” had a high degree of Persian content, which was gradually discarded in favor of Urdu to increase circulation by catering to a wider readership.

The new gallery is displayed at the ‘Museum of Peace’, conceived, designed and curated by Jaspal as a celebration of the common composite culture of pre-partition Punjab in general and Amritsar-Lahore in particular.

Located within the Sarhad restaurant complex, an Amritsari-Lahori cuisine specialty restaurant, near the Attari-Wagah border, 30 km from Amritsar, the museum is India’s first open-air, walk-through, story-telling museum. It has no entry fee.

The British colonial period traces the organic links between the twin cities of Amritsar and Lahore through growth of the railways, education, trade and Lahore’s film industry. One panel shows a 100-year-old Lahore-Pathankot railway ticket costing Rs 3, considered quite a princely sum in those days.

The museum is dedicated to late Prime Minister Atal Bihari Vajpayee. In February 1999, Vajpayee, in his quest for lasting peace in the sub-continent, had crossed the Attari-Wagah border in a luxury bus to Lahore to take forward the sub-continental peace process that however, got derailed when Pakistani intruders occupied the icy heights of Jammu and Kashmir a few months later. The Indian Army lost over 700 personnel in clearing the heights.

Jaspal proposes academic collaboration between universities on both sides of the border to study the growth and impact of the vernacular press in pre-partition Punjab.

“Otherwise, we may have many mini-1947s (the partition of the sub-continent) silently incubating,” he maintained.

(Jaideep Sarin can be contacted at jaideep.s@ians.in )

Share
Previous FCRA licence of over 4,800 NGOs cancelled in 3 years
Next No lessons learnt from the past, ‘Military History of India’ makes clear