New Delhi:  The Christian community is up in arms against the Union Territory Dadra & Nagar Haveli and Daman & Diu administration over an official circular compelling all schools including non-aided schools to venerate Hindu Goddess Saraswati , United Christian Forum (UCF), a representative body of the community, Monday urged the  Administration and the Directorate of Education of Daman to immediately withdraw this circular which it said infringes ones fundamental rights of professing  and practicing  a faith. 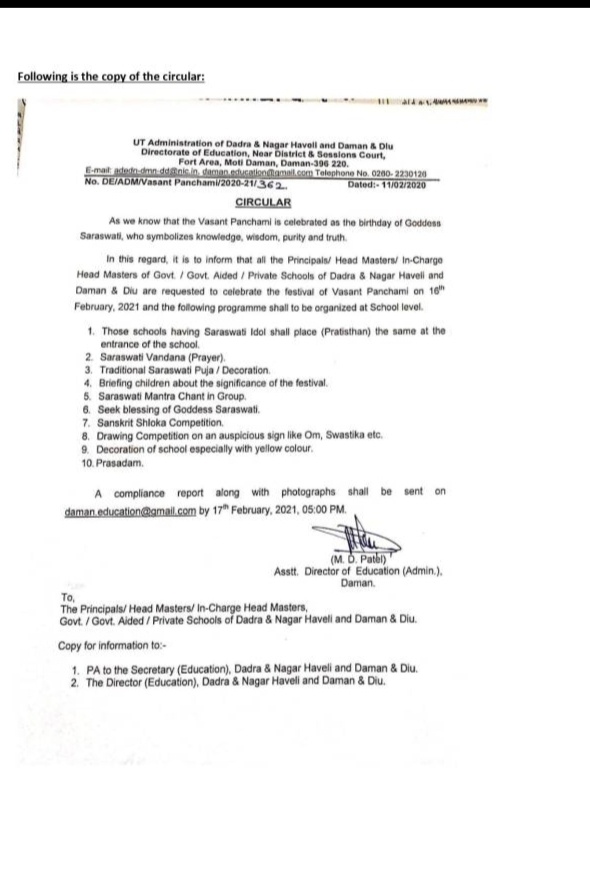 For making the celebration of Vasant Panchami mandatory by venerating Goddess Saraswati, the Daman Administration has directed all government, government aided and private school principals to conduct the following programme and submit compliance report along with photographs by February17, 2021:

The Christian community in the union territory expressed deep anguish over the official circular saying it is meddling in their religious beliefs.

UCF functionary A C Michael told Muslim Mirror, that two years ago, the Daman administration had attempted to cancel Good Friday as a gazette holiday.  Then the Christian community had approached the Bombay High Court and succeeded in reversing the order. Michael, who is a former member of Delhi Minorities Commission, said the conduct of the concerned administration gravely impinges on the constitutional “Freedom of Religion” and “Freedom to Establish and Administer Educational Institutions of Their Choice” as guaranteed and protected in the Constitution of India to all minorities.

The community sees this present order as yet another way of restricting the practice of their faith, as well as the right to administer their institutions. They  feel  it is crude attempt to impose Vedic culture on the impressionable minds in schools.

He underlined that the secular ethos of the country places a constitutional embargo on the government from giving preferential treatment to any one religion in question.

In the landmark judgment of SR Bommai Vs Union of India (All India Reporter 1994 SC 1918); the Supreme Court held that “religious tolerance and equal treatment of all religious groups and protections of their life and property and the places of worship are an essential part of secularism enshrined in our constitution…”

On behalf of the community, he said the United Christian Forum requests the Administration and the Directorate of Education of Daman to immediately withdraw this circular.

Share
Previous Badruddin Ajmal is not anti-Hindu, he talks only about welfare of Muslims: Congress
Next Falling walls : The monuments of Adilshahi Sultanate in Bijapur