DAMMS condemns Farooque’s lynching in Manipur, calls it an organised and planned murder 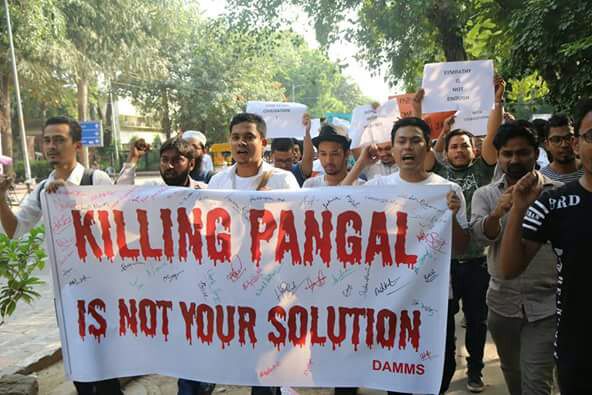 Muhammadd Farooque Khan, aged 26 was an MBA and a proprietor of a successful startup company– Palem Foods pvt ltd. On the wee hour of the 13th September, a fiery mob of Tharoijam lynched Md Farooque khan on accusation of vehicle theft. The incident came to the light to the public when the perpetrators uploaded numbers of pictures and violent video clips of lynching on the Facebook.

As per the videos, the victim was even denied a sip of water in his last moments. He was seemingly put under and tortured in the custody for many hours and dragged out to the open ground. From the video it can be heard, “These all are Pangals(Muslim), killing them all is the only solution for peace in Manipur’’.

The incident is not only one of its kind. On the 12th April 2013, Md Sana of Phoudel, Thoubal was lynched by a mob of Yairipok Khoirom when he went there to meet his girlfriend.  On the 17th march 2015, a mentally challenged youth Md Lukuman, 27 of Thoubal Moijing was accused of being a thief and lynched by a mob of Heingang Ahallup.

In a similar incident on the 2nd nov 2015, a headmaster of a Govt. primary school Md Hasmad Ali aka Babu, 55 of Keirao was lynched by a mob of Uchekon over allegation of stealing a cow.

On the 27th february, 2016, a class nine student of Slopeland public school called Md Rafique, 15 of Sora Ching Wangma , Thoubal district was lynched by a mob of Irengband while herding cattle.

DAMMS also called for the unity of all the sections of progressive institutions against hatred, communalism, stereotyping, chauvinism, prejudice and oppression. “We also can’t deny the larger role of stereotyping and prejudice against Pangals (Manipuri Muslim) as ‘thieves’ which has been plaguing the Manipuri society since long. Since the Pangals don’t have an organised political and economic power, the most backward community has not been in the position to have any medium of making up a counter narrative based on reason and truths against the dominant and oppressive narratives. We highly condemn and question the idea of cultural chauvinism and communal chivalry,” reads the statement.