Definition of Backbiting (Gheebah) in Islam- Punishment in Quran and Hadith

Islam teaches us and emphasized on to give respect other Muslims honor. One of the major sins is a Muslim utters a word how he describes his Muslim brother in a negative way it could be explicitly or implicitly. Gheebah or Backbiting is basically to talk about your Muslim fellow in such a manner that he/she would dislike it if told about it. In it, whether you talk about the physical defect, family, manners, conduct, faith or even his clothes, house, mode of transportation all of these composed Gheebah and the person is known as Mughtaab or backbiter. Holy Prophet (SAW) said about Gheebah in one of his hadith: “A man might speak a word without thinking about its implications, but because of it, he will plunge into the Hellfire further than the distance between the east and west.” (Sahih Bukhari)

Backbiting is the foremost sin mentioned in Holy Quran and Hadith. About backbiting Allah Almighty said in Holy Quran: “Indeed, those who like that immorality should be spread [or publicized] among those who have believed will have a painful punishment in this world and the Hereafter. And Allah knows and you do not know” (Quran, 24:19). 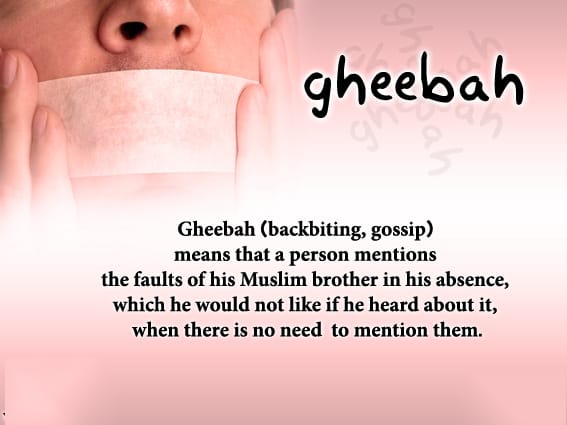 In another verse of Holy Quran Allah Almighty described the punishment of backbiting in these words: “O you, who have believed, avoid much [negative] assumption. Indeed, some assumption is a sin. And do not spy or backbite each other. Would one of you like to eat the flesh of his brother when dead?” (Quran, 49:12). This verse of Holy Quran describes the condition of backbiter in the hereafter. Allah Almighty clear that one who backbites about a person deserves the punishment he would have had if he had eaten the same person’s flesh.

It is not acceptable for a Muslim to spread rumors, or engage in backbiting of another person. That’s why Islam emphasizes on treating others with integrity and respect and it is also a sign of a believer. Muslims are warned about the sins of the tongue in which backbiting comes first. It is obvious that whoever guards his tongue will surely make fewer mistakes. In Holy Quran, Allah Almighty says: “Do not concern yourself with things about which you have no knowledge. Verily, your hearing, sight, and heart all of them will be called to account” (Quran, 17:36)

Abu Hurayrah narrated that Messenger of Allah (SWT) said these words about backbiting: “Do you know what gheebah (backbiting) is?” They said, “Allah and His Messenger know best.” He said, “Saying something about your brother that he dislikes.” It was said, “What if what I say about my brother is true?” He said, “If what you say is true then you have backbitten about him, and if it is not true, then you have slandered him.” (Muslim)

Making fun of someone also comes in backbiting. Our beloved Prophet Muhammad (SAW) opposed backbiting even when it appears in His family. “Once a woman visited Hazrat Aisha (RA) and when the woman got up to leave, Hazrat Aisha (RA) made a sign with her hand indicating to the Prophet (SAW) that the woman was short of stature. The Prophet (SAW) immediately chastised her, saying, “You have backbitten!” (Tirmidhi)

Below we will discuss How to avoid Backbiting (Gheebah):

In short, backbiting (gheebah) is prohibited in Islam and is considered a major sin. Gheebah has severe punishment in Islam mentioned in Holy Quran and Hadith. Anas narrates that the Messenger of Allah (PBUH) said: “When I was taken to the heavens I passed by some people who had nails made of copper with which they were scratching their faces and chest. I enquired who are these people Jibreel? He replied these are people who used to eat the flesh of others (backbite others) and defame them” (Abu Dawood). May Allah (SWT) keep us away from this major sin and forgive us all. Ameen!

Government’s step towards modernisation of madrassas

Equating Islam with Violence is a wrong notion

Conflict is a major issue which affects the entire world. It seems to spread like …