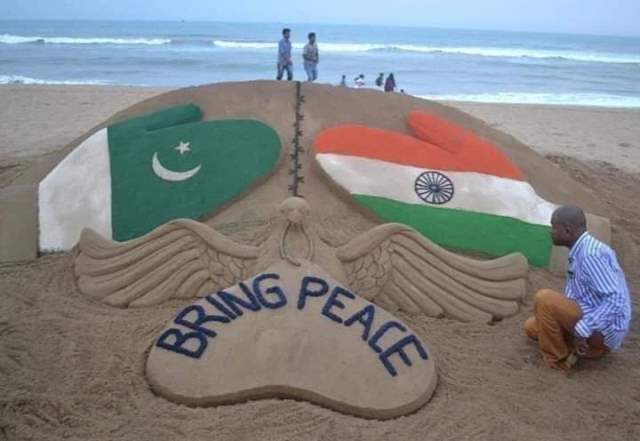 There are always two options to solve an issue between two states, war and dialogue. In the past, countries choose war more often than dialogue and there was bloodshed, loot and plunder. Both the countries suffered and there was still no solution. They had to opt for Dialogue even after they were done with the war. As civilization progressed, most of the countries were struck by the realization that there can be no peace without Dialogue. After all, war brought only destruction to the participating country.

Now, we’re living in the 21st century and there still are wars, but usually it is between two countries on two opposite ends of the power gradient. A war between two countries like India and Pakistan, over Kashmir issue, is highly improbable because leaders of both the countries know that with nuclear weapons at the disposal of both countries, nothing would be achieved except destruction for both the countries. In such a scenario, dialogue is the only way to go forward. It’s peaceful, accommodating, satisfactory and it works, unlike war (every country realizes it now)

Despite Indian army’s blinding of hundreds of Kashmiri youth and terrorising millions of Kashmiris in the recent weeks, there is only one outcry that is reverberating throughout the Kashmir Valley: Azadi, Azadi (Freedom, Freedom).

Instead of heeding to the demands of the people who have de facto rejected the Indian rule, the Indian government is resorting to the same old methods it has used since 1947 and expects the people will forget what they have been demanding for the last seven decades. This is a myopic political game. It has not worked in the past. It will not work in the future.

The ongoing military skirmishes along the Line of Control are meant to divert the world attention from the major issue that India is facing in Kashmir and refusing to accede to people’s demands. A wise leadership in Delhi will look at the issue from a different angle now with a view to find a solution to the old conflict we inherited because of the Partition of British India in 1947.

The fate of the State of Jammu and Kashmir was decided by military power, shabby deals and false promises of holding plebiscite that would allow the people of Jammu and Kashmir to decide their future. What is needed now is not military confrontation and warmongering. A new war is not going to solve the Kashmir issue. India and Pakistan have already fought two wars because of the Kashmir conflict. Did they solve the Kashmir issue? They did not. Any new military confrontation will prove to be even more destructive and totally futile. Hurling poor soldiers, both Indians and Pakistanis, in the kiln of war and killing innocent people will hardly have any positive consequences. The Kashmir conflict will not disappear even if they unleash a third war. The Kashmir conflict has to be addressed politically and with good will a negotiated settlement is possible.

The people of India and Pakistan were not born to be the enemies of each other. The toxic propaganda by the rulers of the two states has been instrumental in creating enmity between the people of the two countries. Religious and political extremists and hate-mongers in both countries have also poisoned the minds of millions of people.

Thhe political leaders of India and Pakistan should  follow the path of peace, stop sabre rattling, and avoid provoking nationalist and religious passions of the people. Nothing good will ever come out of cheap emotionalism.

Every political realist knows that the Kashmir conflict is not so easy . The parties have to take into account many factors in finding a workable, equitable and acceptable solution. This can only be done when the rulers of India and Pakistan take concrete steps to seek a solution to the conflict by letting the people of Jammu and Kashmir decide their own future. This way of dealing with the issue has the potential to make India and Pakistan as close partners in trade, education, joint projects for the welfare of the people of the region instead of using enormous resources on military, military hardware and weapons.

(The author of this write up is freelancer and writes regularly on various issues and can be reached at Email :  waniaquib08@gmail.com,The views expressed are personal )