Evolution and its Adversaries (Part-11)

Genes contain information. But who and when will read the information, and how interpret it, to produce a new characteristic in a biological body, is certainly beyond the control of the genes, which destroys the idea of changes caused by random mutation and natural selection, writes SYED IQBAL ZAHEER.

A strong factor that plays a crucial role right from the start of the development of a fertilized egg – or even earlier – goes by the name Epigenetics. Traditionally, it was universally thought by the biologists that changes in the structure of human genome occurred through mutation, gradually, over thousands of years or longer, to alter traits. Of them useful traits were preserved by Natural Selection, which – over millenniums –created new species such as, for example, from gorillas to monkeys.

Evolutionary biologists heavily depended on this idea. They demonstrated through genetic studies, that such and such a trait developed in an animal during such and such a geological phase, proving the case for evolution. They even constructed ‘Evolutionary Trees’ and claimed that the theory was ‘beyond any doubt.’

However, being not too sure, Darwin had predicted in his Origin of Species:

If it could be demonstrated that any complex organ existed, which could not possibly have been formed by numerous, successive, slight modifications, my theory would absolutely break down. (p. 204)

Current research is saying what Darwin had feared: the theory is absolutely breaking down. Old evolutionary ideas might have to be discarded. New research reveals that life conditions and experiences of parents, grandparents and even great-grandparents can flip genes ‘on’ or ‘off’ right at the fetal stage of development in the womb, or could alter the genetic code.

Consequently, new genetic characteristics (such as, for e.g., the lengthening of giraffe’s neck) can appear in a single generation and be passed on to the progeny – without the genetic program, or Natural Selection playing any role. The ‘actor’ is known as epigenetics.

Dr. Ian Cowell, of Institute for Cell and Molecular Biosciences, University of Newcastle-Upon-Tyne, UK, defines epigenetics in the following words:

In its modern sense, epigenetics is the term used to describe inheritance by mechanisms other than through the DNA sequence of genes. It can apply to characteristics passed from a cell to its daughter cells in cell division and to traits of a whole organism. It works through chemical tags added to chromosomes that in effect switch genes on or off.(http://bscb.org/learning-resources/softcell-e-learning/)

In a nutshell, epigenetics is the study of characteristics or ‘phenotypes’ that do not involve changes to the DNA sequence; and the long-lived roundworms are just one of many examples. Others, as we will see below, include how queen and worker honey bees can appear so different despite being genetically identical, how starvation in human populations may affect the health and longevity of the next generation, why all tortoise-shell cats are female and even how we all develop from a single cell (a fertilized egg) to end up with bodies containing many different types of specialized cells, but which all contain the same genes and DNA sequence. (Ibid)

So, gone is the million-year wait for new species to appear. Gone are the days when the process awaited random mutation to work on nucleotides and alter the genetic code when fertilization had just occurred and replication had still to start. It can happen overnight. Let the genes remain in their habitat. Modified or not modified, they have no role to play, but must bear some restraint. Following illustrations will help understand; but first, to answer how DNA is packed:

The nucleus of a cell is usually only about 10 microns in diameter – that’s 1/100th of a millimetre – and if the DNA in a cell was just left all floppy and loose; it could stretch for two metres. The DNA is curled tightly around the histone octamers and these are all stacked closely on top of each other. ( The Epigenetics Revolution, p. 48, Nessa Carrey, e-pub).

The illustration below should help understand: 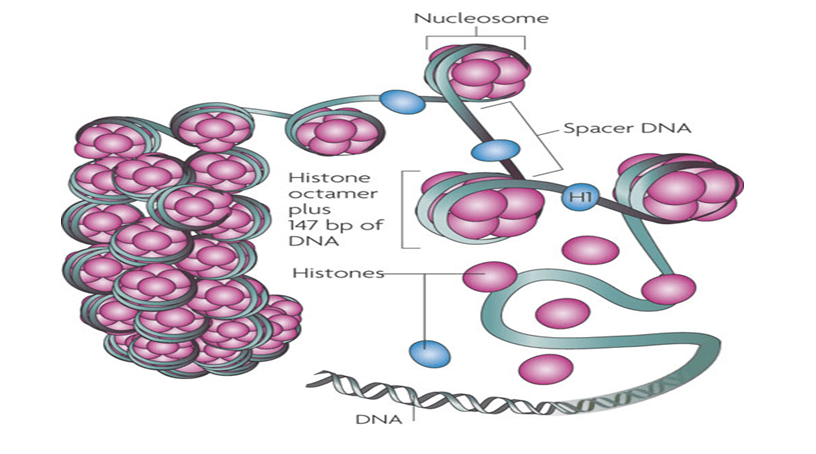 The Figure above shows how DNA is packed within the tiny nucleus. First, DNA goes two rounds around eight balls of a chemical molecule called histones. Then the histone packages are stacked together. Finally, the whole is twisted like a rope into a shape called chromosome. There are 46 of them (23 pairs within the nucleus). Within the nucleus, their coded messages are copied by RNA, but the chromosomes themselves remain within the strongroom, never to see light of the day during their entire life-cycle. (Illustration credit: http://www.nature.com/ nrmicro/ journal/v7/n7/fig_tab/nrmicro2149_F1.html); text by author

The sketch below should further clarify:

The Figure above shows DNA packaging. Note that it is no less than a herculean task for a machinery to read the nucleotides, hidden away by the packing system. [https://www.studyblue.com/notes/note/n/chapter-11-biology-1210-renee-dawson/deck/15996201]

To understand the mechanism of epigenetics, the following may be added: A certain group of molecules called methyl group, stroll by in the cell’s nucleus and attach small chemical tags to the DNA which say when and what genes should be switched ‘on’ or ‘off.’ Thus, some gene becomes suppressed. They are there, intact, but for all practical purposes, useless. See the sketch below for further explanation: 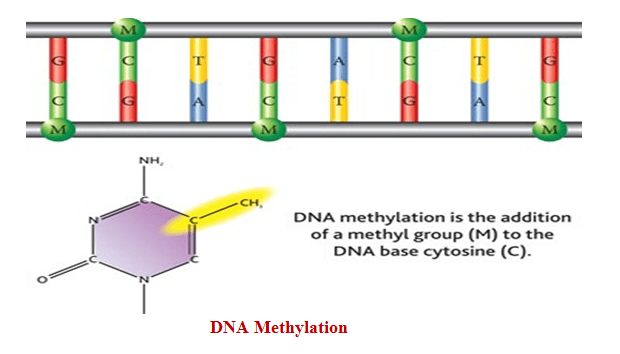 The methyl group shown at bottom of figure above, is attached to the nucleotide C’s in the (ladder-shaped) chain shown above. When the reading and copying machine arrives, it fails to read the genetic area where these methyl groupsare attached. As a result, the gene becomes ineffective. Sometimes, a whole group of genes is made ineffective by this methyl group. It is not known as to who orders the methyl group to stick itself to DNA. See illustration below. In the Figure above, notice that a tiny molecule (called methyl group) can prevent a gene from functioning. Also, it is not known how these methyl groups could be disengaged.

Figure below clarifies methylation, a function of epigenetics. 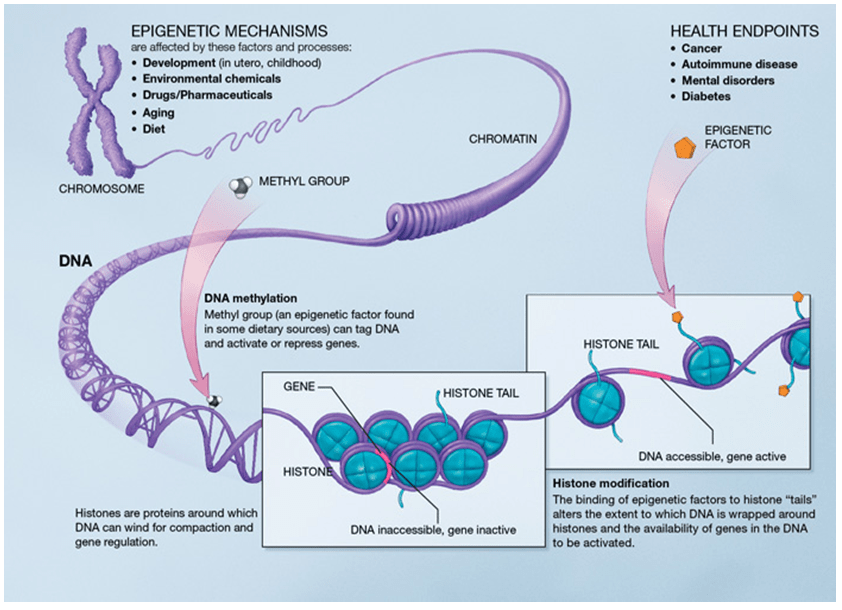 Epi means above or beyond, and so, epigenetic means above or other than genetics. A methyl group, chemical in nature, arriving into the cell from dietary or other sources, attaches itself to the DNA strand at a place where a gene occurs. That makes the DNA inaccessible to the DNA reader, rendering the gene at the area inactive. It can happen that an epigenetic factor bindsitself to the histone, around which DNA chain is wrapped and render the DNA readable, and the gene gets activated. [https://en.wikipedia.org/wiki/Epigenetics]

A methyl group is very small. It’s just one carbon atom linked to three hydrogen atoms. Chemists describe atoms and molecules by their ‘molecular weight’, where the atom of each element has a different weight. The average molecular weight of a base-pair is around 600 Da (the Da stands for Daltons, the unit that is used for molecular weight). A methyl group only weighs 15 Da. By adding a methyl group the weight of the base-pair is only increased by 2.5 per cent. A bit like sticking a grape on a tennis ball… Given that the modification is so small, it’s perhaps surprising that it will come up over and over again in this book, and in any discussion of epigenetics. This is because methylation of DNA has profound effects on how genes are expressed, and ultimately on cellular tissue and wholebody functions… Events that take place in the first three months of development, a stage when the foetus is really very small, can affect an individual for the rest of his life… The epigenetic machinery reinforces and then maintains particular patterns of modifications, thus creating the levels of gene expression.

Consequently, these initial small fluctuations in histone and DNA modifications may eventually become ‘set’ and get transmitted to daughter cells, or be maintained in long-lived cells such as neurons, that can last for decades. Because the epigenome gets ‘stuck’, so too may the patterns of gene expression in certain chromosomal regions. In the short term the consequences of this may be relatively minor. But over decades all these mild abnormalities in gene expression, resulting from a slightly inappropriate set of chromatin modifications, may lead to a gradually increasing functional impairment. Clinically, we don’t recognize this until it passes some invisible threshold and the patient begins to show symptoms. (The Epigenetic Revolution, p. 65, Nessa Carrey, e-pub)

The following may also be noted:

An epigenetic state essentially provides a way tostore information on gene activity. Such gene activity information can be specified by interactions betweenthe DNA and protein or RNA factors or by achemical mark on the DNA itself. However, the essenceof epigenetics is that this information is preserved during cell division.(Dr. Ian Cowell: Epigenetics – It’s not Just Genes that Make Us,http://bscb.org/learning-resources/)

Honey bees provide us with a good example of how this can work. Worker bees and the queen have very different bodies; the queen is much larger, longer lived, has an enlarged abdomen and lays many thousands of eggs, while the smaller workers are sterile but have complex for aging and communication skills. Despite this, the queen and workers in a hive are female and genetically identical. The clue to how this comes about what lies in royal jelly, a secretion that is fed to some developing larvae, and which results in these larvae becoming queens rather than workers… a fascinating piece of research showed that if the amount of the methyl group adding DNMT enzyme was artificially reduced in bee larvae, then the larvae developed into queens, even if they weren’t fed royal jelly. Thus, the switch between queen and worker can be flipped by the abundance of methyl tags on the bee larvae’s DNA. Fewer methyl tags lead to switching on of a special gene or genes in the developing larvae that results in the development of the larvae into queens and not workers. (Dr. Ian Cowell: Epigenetics – It’s not Just Genes that Make Us, http://bscb.org/learning-resources/)

Astonishing as it may sound to those taught that genes and chromosomes were responsible for everything in the body, Gerald Edelman states: “… the principles governing these [developments] are epigenetic … The connections among the (brain) cells are … not precisely pre-specified in the genes of the animals.” (The Dependent Gene, p. 100)

The central position of the genetic strip therefore, in shaping biological bodies, is stripped off by recent research. In addition to epigenetics, various other factors are being discovered that challenge the evolutionary process. Even the so-called junk DNA seems to be playing its role in gene control. Writes Nessa Carey:

Thousands and thousands of regions of junk DNA are suspectedto regulate networks of gene expression. They act like thestage directions for the genetic script, but directions of a complexitywe could never envisage in the theatre…. (Junk DNA, p. 5, 2015, e-pub)

Genes contain information. But who and when will read the information, and how interpret it, to produce a new characteristic in a biological body, is certainly beyond the control of the genes, which destroys the idea of changes caused by random mutation and natural selection.