Evolution and its Adversaries (Part–14)

The assumed origin and development of organs and organelles through mutation, which – the evolutionists never failed to emphasize – works randomly, in step by step motion, over generations, sometimes lasting thousands of years, and yet directionless, does not fit into the evolutionary mechanism.

Symbiosis in biology can be understood as the living together of two (or more) unlike organisms, which could not individually survive. To quote:

“Distinct organisms interact by providing a habitat or ecological niche for one another, by serving as a nutritional source, by enabling reproduction (in the case of pollination, for example), or by providing metabolic functions, morphological traits, and behavioral features neither of the partners are able to develop on their own. When organisms engage in a symbiotic association, both the host (the larger partner in the association) and the symbiont(s) (the smaller partner) often develop new features and sometimes form new individuals with characteristics not found in the individual organisms … viruses (genetic agents) and prions (infectious proteins) can be understood as symbiotic partners although neither are considered basic units of life.” (Reticulate Evolution, ed. Nathalie Gontier, 2015, p. 14, epub.) 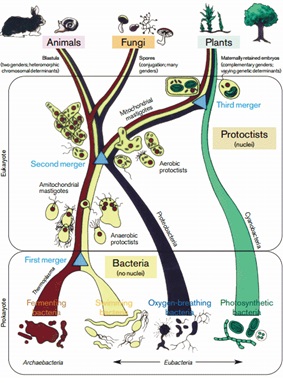 Fig. 14-1: Illustration showing how Symbiosis has been working 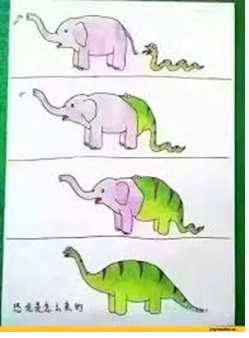 Fig. 14-2: A humoristic view of how Symbiosis works

In simpler words, symbiosis is the acquisition of an organism by another unlike organism, and through subsequent long-term integration emergence of new structures, and metabolism. One of the examples that come to mind foremost is the relationship of the humans with bacteria. The bacteria in the guts of the humans gets its energy source from the humans, while humans, by letting them live and multiply, get their food digested. Bacteria cannot survive without the humans and humans cannot survive without bacteria in their guts, not to look into other areas.

Similarly, protozoans find a safe haven, survive and thrive within the guts of termites while termites, in turn, depend on protozoan to convert wood into food. Fig and wasp relationship is another example of symbiosis and, the so-called co-evolution. More examples could be cited but they are somewhat complicated for laymen.

Michael Behe, an American biochemist (Lehigh University, Pennsylvania) was perhaps the first scientist to point out in his landmark work Darwin’s Black Box (1996) that the theory of evolution fails to explain itself at the molecular level. Offering as example the Flagellum, he showed that the assumed origin and development of organs and organelles through mutation, which – the evolutionists never failed to emphasize – works randomly, in step by step motion, over generations, sometimes lasting thousands of years, and yet directionless, does not fit into the evolutionary mechanism – considering such cases as which exhibit a complexity that can be described as irreducible.

What he meant by irreducible complexity is that the process, if it did happen, required several kinds of proteins, that must have appeared in order, performing coordinated functions but which were, individually, of no use within the cell: the whole package had to come, bits and pieces would be discarded by the cell’s machinery. Let us explain it with an example. 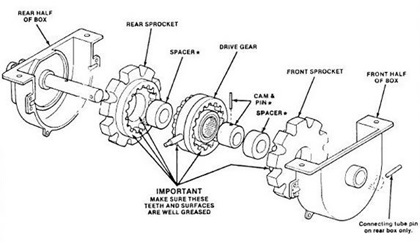 Note that the above cannot be assembled, if the parts are supplied at random. There has to be planning behind design, manufacture, supply, and assembly. [https://www.google.com.sa/search?q=images] 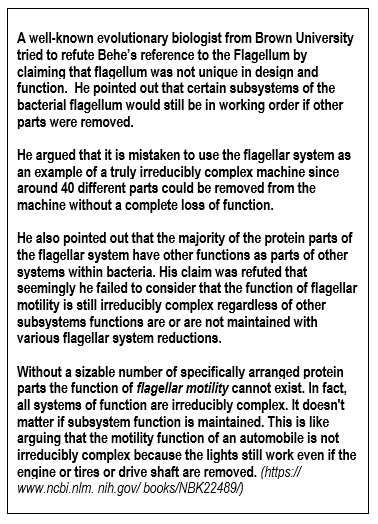 Note in the above gearbox that each of its member elements has to be placed in order, for the assembly to be functionally successful. Any element missing, or misplaced, will result in a functionless jumble of steel. Secondly, the mechanic assembling the parts must be supplied with the elements in the same series as above. To give him a middle part with the end-plates, but the rest missing, would not be of any use to him. If the same effort was made in a living cell, it will not wait a millennium to get the missing parts in order to assemble them so as to produce a successful gearbox, nor would the cell wait for the arrival of the parts. It will discard the parts that have arrived, without other parts following in succession in the series required. After all, many processes that fail to produce a functioning protein by the cellular machinery, result in a molecular blob and are destroyed by a cellular machinery – called lysosomes – which breaks them apart. This is happening all the time within the cell.

In short, a gear box shaft needs someone to design it, then, manufacture and supply the parts, with instructions about the sequence of assembly, to end with something which is functionally complete. But, design is ruled out by the evolutionists, since that requires a designer. But the fact remains that the above conditions not met, the cell will not produce a functional gearbox.

Michael Behe’s discussion led to the conclusion that the special nature of the components – e.g. of the flagellum or cilia – their assembly, and functions could not be explained without presupposing a plan, right choices of the elements, precise step-by-step execution, a clearly definable end-purpose, and hence, design.

This was a powerful argument, and it took the biological world by storm. The “Intelligent Design” movement was born. Initially, as in many instances, leading biologists, the champions of Darwinian evolution, tried to ignore Behe, but could not for long. Some have tried to answer how Flagellum was never a problem to explain in evolutionary terms, but have failed.

Fig. 14–4: A Bacterium with flagella at one end

To consider the issue a little in detail might further elucidate the matter. The bacterium has a few spindles at one end of its body. These are called the flagellum. They are used for locomotion through the liquid environment. The movement is achieved by the rotatory movement (or lashing) of the flagellum, acting like oars. The mechanism at the base follows the same principle as marine propellers. Energy is drawn, amazingly, from the outer cellular wall itself, not from ATP. In technical terms the flagella is described as a “biological macromolecular Nano-machine for locomotion.” (A Nano is one billionth of a meter). The biological world offers several varieties in terms of shapes, numbers and functions, but all are extremely complex.

The flagellum also appears in human body cells (sometimes called “cilia”). The sperm, for example, has a long tail to help it move forward in the fallopian tube, following the same principles of operation.

A very brief, and simplified, description of the flagellum and its machine could be undertaken here. 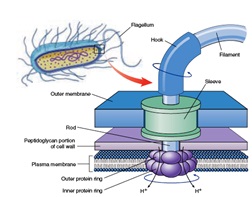 Fig. 14-6: A Bacterium flagellum and its driving machinery

The above shows a bacterium on the left, its several flagellum, and the machinery at right that drives it through rotations. The machinery is located at the bacteria’s plasma membrane.

Mainly, it consists of a motor placed on the inner plasma membrane of the bacteria’s body. It is surrounded by rods and rings reaching out to the outer membrane, with a hook that rotates along with the end filament.

Averagely, flagella use about 30 different kinds of proteins, and altogether their number runs into thousands. Most bacteria are highly mobile and get where they want to by swimming, or rather rowing through a liquid medium. Rotation of the flagellar motor is achieved by a flow of charged ions across the bacterial plasma membrane.

Every element of the machinery is elaborately designed and intricately assembled with others. If a single protein is missing, the system will not work to full efficiency. The intricacy and complexity requires an imagination about what is required, for what functions, and then manufacture the proteins required, assemble them first to form parts and fixtures, and then put the parts together to a high degree of precision.

The evolutionists, as usual, escape by pontifically pronouncing that cellular machinery has the capacity to self-assemble. Write two scientists:

Formation of complex biological structures such as cells and cellular organelles is based on self-assembly of component macromolecules such as proteins and nucleic acids either in solution or within lipid membranes. The self-assembly processes are all driven by precise recognition of template structures by assembling molecules, both of which have well-defined three-dimensional atomic arrangements for specific binding and interactions and yet extensive flexibility of these molecules including disordered conformation plays essential roles in formation and stabilization of complex structures that are otherwise impossible to form. (Ferenc Vonderviszt* and Keiichi Namba, Structure, Function and Assembly of Flagellar Axial Proteins: [https://www.ncbi.nlm.nih.gov/books/NBK6250/]

The ‘self-assembly ability’ does not offer an easy route out, and does not answer other questions. Where to the proteins come from? Who dictated the order? Where is that machinery in the cell which manufactured the parts? And, how do we solve several many other riddles?

“The stators are machanosensors to regulate the number of the stators driving the motor in response to changes in external load. Each stator is also a load-sensitive proton channel that efficiently couples proton translocation with torque generation in response to the load changes. However, it remains unknown how the stators sense the amount of external load to control the number of functional stators around the rotor as well as the proton flow through the channel. Interactions at the rotor–stator interface are important, not only for torque generation but also for efficient stator assembly around the rotor. However, it remains unknown how the rotor–stator interactions allow the stator to open the proton channel and to be anchored to the PG layer.” – Structure and Function of the Bi-Directional Bacterial Flagellar Motor, Yusuke V. Morimoto and Tohru Minamino – https:// www. ncbi.nlm .nih.gov /pmc /articles/PMC4030992/ (Reference numbers removed)

Not unexpectedly, other scientists have taken up the issue:

“[E]ven if all the protein parts were somehow available to make a flagellar motor during the evolution of life, the parts would need to be assembled in the correct temporal sequence similar to the way an automobile is assembled in factory. Yet, to choreograph the assembly of the parts of the flagellar motor, present-day bacteria need an elaborate system of genetic instructions as well as many other protein machines to time the expression of those assembly instructions. Arguably, this system is itself irreducibly complex. In any case, the co-option argument tacitly presupposes the need for the very thing it seeks to explain–a functionally interdependent system of proteins.” (Scott A. Minnich and Stephen C. Meyer, Genetic Analysis of coordinate flagellar and type III regulatory circuits in pathogenic bacteria, pg. 8) – http://www.evolutionnews.org /2011 /03/michael_ behe_ hasnt_ been_ refute044801.html

In the like vein, philosopher Angus Menuge lays out a number of obstacles which must be overcome by “co-option” or “exaptation” explanations … He wrote:

“For a working flagellum to be built by exaptation, the five following conditions would all have to be met:

C1: Availability. Among the parts available for recruitment to form the flagellum, there would need to be ones capable of performing the highly specialized tasks of paddle, rotor, and motor, even though all of these items serve some other function or no function.

C2: Synchronization. The availability of these parts would have to be synchronized so that at some point, either individually or in combination, they are all available at the same time.

C3: Localization. The selected parts must all be made available at the same ‘construction site,’ perhaps not simultaneously but certainly, at the time they are needed.

C4: Coordination. The parts must be coordinated in just the right way: even if all of the parts of a flagellum are available at the right time, it is clear that the majority of ways of assembling them will be non-functional or irrelevant.

C5: Interface compatibility. The parts must be mutually compatible, that is, ‘well-matched’ and capable of properly ‘interacting’: even if a paddle, rotor, and motor are put together in the right order, they also need to interface correctly.”