Evolution and its Adversaries (Part-2)

As stated in the last issue of this magazine, before we begin to understand why and how scientists have been, from the start, critics of the theory of evolution – we need to apprise ourselves with the basics of the nature of living beings, (what the biologists call as ‘organisms’), without which it might be hard to make out what exactly is going on.

To start with, the reader is invited to look into this little circle: o

Do you see a human cell within it? No?

If you cannot, we do not blame you for that; because a cell is not there.

An average human cell measures 10-5 m; or, 0.05 mm. On an average, a thing of size 0.10 mm is visible to an unaided eye. A microscope has to be used to perceive an average human cell. But, for our purposes, a microscope will not do. We need to see inside a cell to discover its contents.  For that we need a microscope that can magnify the cell to a 1000 times. But that too is not enough, because with this microscope we observe a little ball within the cell called nucleus. To see what’s inside this nucleus, we need an Electron Microscope. When we examine the cell with this Microscope, we see another little ball within the nucleus. This little ball is called nucleolus. Thus equipped, when we peep into the cell, what is it we see?

Well, you see a miracle. To put it most mildly, the scene inside is simply amazing. There are millions of molecular machines inside engaged in such a hectic activity that to merely imagine it would leave one breathless.

Human body is made of organs (heart, brain, kidneys, etc.). Organs are made of tissues, flesh. They are made of cells, which are the smallest unit in a body. There are some 70 trillion cells in a body of average size. (There are more cells in your body than there are stars in 70 galaxies put together). Each organ has cells that are special to it. So, the heart is made of heart cells; the brain is made of brain cells, and so on. Some organs have more than one type of cell within them. Altogether, there are roughly 350 discrete cells in a human body (David S. Moore).

Although they are all different from each other, they share something common between them. They all have a tiny ball within them (as noted above: the nucleus) which contains a certain molecule called – for simplicity – the DNA (apart from other classes of molecules). And in every single cell of the 70 trillion cells of the body, the DNA is the same. To this we return later.

Roughly spherical, the cell contains within it smaller functioning parts called organelles, various other machineries, proteins. etc. For example, Mitochondria, Ribosomes, the Golgi apparatus, and so on, are organelles. Each of these organelles is in multiple numbers within the cell. For instance, there are around 4000 mitochondria in every cell; while ribosomes are in millions, up to 10 million in some cells. (Yes, within 0.05 mm). These organelles are made of molecules. Molecules are nothing but a collection of atoms. So, first we have atoms, then molecules, then proteins (a collection of molecules), then cells, then organs, and then biological beings – like us.

These organelles float in a fluid (semi-liquid) material filling the cell. This semi-liquid material is called cytoplasm. The little ball mentioned above (the nucleus) floats in this cytoplasm. As mentioned above, the nucleus contains another little ball called nucleolus. The cell is a unit because it is surrounded by a boundary. This boundary wall made of molecules is called the cell-membrane. Cells in a body are adjacent to each other, but do not intermingle with each other, because each has a boundary wall (the cell-membrane, or envelop) which protects the contents of the cell from spilling out. If they do, the cell will die. The cell-membrane (the boundary wall) has controlled pores (gates) for materials to come in and leave. Blood circulation brings in, or takes away the material sent out by the cells.

Here is an illustration of a cell. It has been simplified. Otherwise, it is almost impossible to show all its contents, unless the paper size is enlarged to a kilometer square. Another problem is that a cell is roughly spherical. So, to show all its contents on paper, we will have to cut it into segments of thickness 0.000001 mm. It is far easier to imagine what it is like, than to try and create a picture of it. Again, at any given moment there are millions of internal parts moving around. So, how are we to show the cell’s parts in action? It is ironic that despite all the advances in science and technology, we live and die without knowing, and without the prospect of ever knowing, what we are made of. 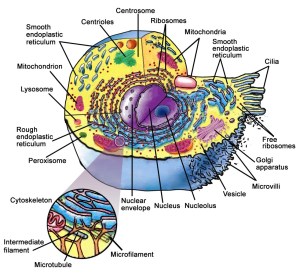 In this simplified illustration, it is only three parts that are, at the moment, of our concern: the cytoplasm, the nucleus, and the nucleolus. With further reduction we could say we are only concerned with the contents of the nucleus. But then, a further reduction is possible. In this article we shall be dealing with the DNA strands most of the time. They contain what are known as the genes.

To avoid complications we shall not attempt to explain the functions of many, let alone all, machines and organelles. But perhaps the most common of them could be given a line or two. 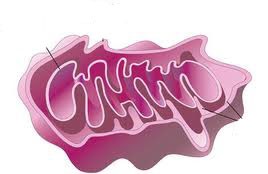 Mitochondria are the power houses. They supply the power needed for cell machineries to operate. These have their own little bundle of DNA consisting of some 37 genes, coded for enzymes that function within the mitochondria. Apart from the central DNA, encoding the entire human, it is mitochondria alone which has its own DNA. And, interestingly, mitochondria are inherited exclusively from the mother. During fertilization the mitochondria of the male sperm are left out. If at all they manage to penetrate the egg, they are destroyed inside. Thus, some of the DNA of the mitochondria could be traced back to Hawwa’ (asws) – who knows. 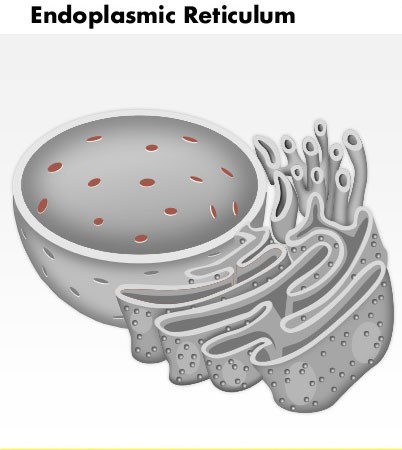 Endoplasmic reticulum is involved in packaging and transport of proteins that arrive from the ribosome machinery. From here they are transported to the sites at which they are needed within the cell. The protein themselves carry the signals that ensure that the cargo is delivered to the right place. 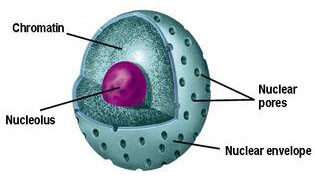 Above: The nucleus, nucleolus and the pores in the nucleus wall.

The nucleus is the “strong-room” where the data for making a biological body is stored, in the form of DNA strands. 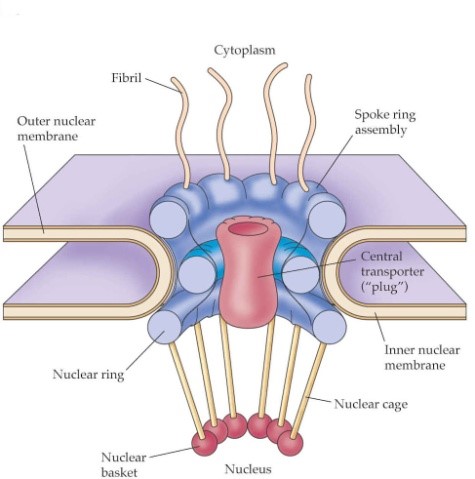 This is an interesting site (as if any other is not). The nucleus (which contains the data stored in it in the form of DNA), is closed from all sides with an envelope, except for some 3000 to 4000 little holes in its surrounding wall. These pores are closely guarded with valves (as illustrated above) opening and closing for protein escort-molecules, which only guarantee import and export of the right stuff into the nucleus from the cytoplasm and back. Nothing untoward can gain entry. Viruses gain access into the nucleus with the help of, as it is said, “counterfeit tickets.”

See illustration above. In this chamber subunits of ribosomes and certain other proteins (tRNA) are made and then exported to outer shell of the cell, passing through the nucleus, but not landing there, but rather proceeding straight to the cytoplasm. The ribosomal units (parts) are combined into complete ribosomes in the cytoplasm. When complete, ribosomes make proteins.

As stated earlier, the nucleus contains a chemical component known as the DNA (we need not expand this short form). They are also known as chromosomes. There are 46 of these chromosomes in the nucleus of every cell of the human body. They exist as pairs and so there are 23 pairs of them. Half of them, i.e. 23 chromosome strands come from the male and the other half from the female. 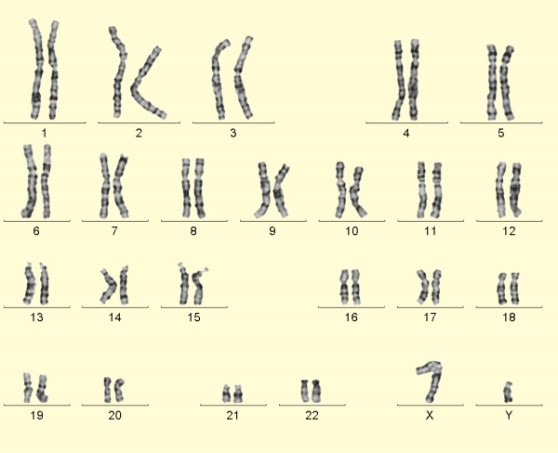 The 23 pairs of the DNA molecule

They are stored in the nucleus of every one of the 70 trillion cells of a body. Of these 46 chromosomes, 23 come from the male parent (via the sperm) and 23 from the female parent (via the ovum, the egg). How the 23+23 combine to produce a unique individual, is decided at the time of fertilization, that is, the moment the sperm enters into the ovum. 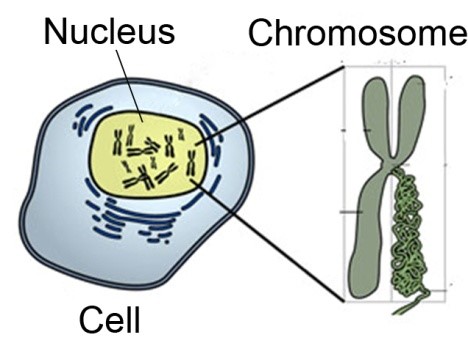 Above: A pair of chromosomes out of the 23 pairs stored in the nucleus of every cell.

Above: An enlarged pair of chromosomes, with one leg showing how it is coiled to reduce storage size.