Back in our childhood, we used to be told by our elders of a few predictions of the Prophet (on whom be peace). They stuck to memory. One of them was that a time will come when barefoot, bareheaded Bedouins will construct tall buildings. Such predictions were usually received with conviction that they “could” happen, but perhaps would take some centuries.

As we grew into the Western skeptic age, the predictions of the Prophet were pushed back into infrequently visited areas of the mind. The new age directed us on redefining such predictions as which, if they happened, would happen, in time quite remotely distant, and would manifest their true meaning in forms, perhaps, very different from the surface meanings of the words:“So, be rational,” we were told, “and wait not for the predictions to come true too soon.” As time passed, Western influences grew stronger and the newer generation of Muslims was harder to convince to the extent that it would make any difference to their attitudes to life.

As an aside, it might be pointed out that the skepticism of the West, quite proudly claimed, and mentioned as an achievement by its thinkers, is all about good things. That is, the skepticism is, in reality, a pessimistic view of life. It expects nothing “real” good to happen to Man. Influenced by Newton’s Second Law of Thermodynamics, the Western mind believes in entropy, worsening of things. They believe things will get worse and worse. This makes them misanthropes, destructive to man, leading them to wars of death and destruction, undertaken with callous attitudes. If there is any optimism, it is not about Man, but about things. With more and more development in science and technology, they believe, more and more things will be produced. Hopefully, it is thought, that will make life better. Or it may not. But that the things will be there, in ever improved versions, that is assured. Will life get any better? Of course, because things would be there. But when asked, “Will men be happy?” The answer is, “Maybe yes, maybe not.” Actually, ideas about Man are doomed. This is what Western skepticism means – at least, considering its one aspect.

At any event, with skepticism of one kind or another pervading life, thought and actions, predictions of the Prophet could only lie at the back of the mind. They had also to take that secondary position because they were to be hidden from the Western man, Western mind, Western idols. It was also to escape skeptic shake of the heads and dismissal of the idea gestured by the throwing back of shoulders.

However taken, they were predictions of a Prophet and no weird songs of a French wizard. It wasn’t a few decades in our lives but we were witness to one of the predictions coming true. It was not a few of them, but a whole generation of Bedouins, living across lands of huge dimensions, that began to work on making the prediction come true. It happened much sooner than we had ever imagined; so sooner, that initially Western skepticism cautioned us to wait and see, and not believe in the first instance.

Today, the barefoot, bareheaded Bedouins of yesterday boast of, with some pride, but more satisfaction, the tallest building in the world. Another is under construction with the ambition to make it taller than the tallest.

The Prophet’s prediction stood taller. It strengthened Muslim faith in Islam. This, however, is a point rarely understood by the Islamophobists. Islam has the inner content, power, and the force of conviction, to keep a believer within its fold. And, it is divinely rejuvenated. While most faiths are suffering decline in number of people who believe in their veracity, that of the Muslims increases – much to the global discomfort. Envious, their adversaries declare war on Islam and Muslims without knowing that their enmity, their hatred of Islam and Muslims, their desire to destroy the culture and civilization that the Muslims have produced, has been predicted too. They rename their intentions as security moves, fire rockets as preemptive measures, on hapless populations, but, in response, Muslims tell each other: “Haven’t these wars against us been predicted?”

And now, here comes news that brings another prediction a step closer to its complete fulfillment. It is another of those we used to hear in our childhood, and, as we grew into an age inimical to truths of life, shook our heads in half-belief, half-disbelief. The Prophet said, “The Last Hour will not strike before the lands of the Arabs turn back into what they once were: lush green gardens with rivers (dotting the landscape).”

The statement has two parts: one, the deserts stretching over thousands of miles, were once lush green gardens with rivers dotting the landscape; and two, the lands will once again turn into what they originally were. As we grew up and became witness to discovery of huge deposits of oil, we began to ask: “From whence these oils?” We learnt the answer: oil is not a liquid mineral; its deposits are not found in the earth like iron or nickel, it is not there from the time the earth was created 4.5 billion years ago; but rather, this oil was the result of death and burial of microorganisms, plants and other materials in the sea-beds. It took hundreds of millions of years to turn into oil in degrees because of huge pressure from above accompanied by high temperatures. The substance once turned into oil, began to migrate until it met with a barrier of hard rocks and thus collected as deposits.

The conclusion was simple: the land must once have had thick forests, and so, there must have been rivers, lakes, ponds and springs on the surface to support the greenery; and, previous to that, the lands must have all been under the sea. The sea retreated for geological reasons, rains kept coming for some time, but stopped altogether. Those rains must have created rivers, ponds etc, affording greenery to the land.

The prediction by the Prophet that the Arab lands were once rich in water and hence blooming with flora and fauna is now confirmed by the latest developments in geology. Says a recent report: 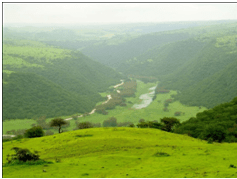 “When most of us think of Arabia, we think of rolling sand dunes, scorching sun, and precious little water. But in the quite recent past it was a place of rolling grasslands and shady woods, watered by torrential monsoon rains.” (www.bbc.com/earth/)

Recent findings of a team of scientists suggest that:

“The Arabian Desert, also known as all of Saudi Arabia and part of Egypt, sprawls across almost 1 million square miles and is home to one of the largest contiguous bodies of sand in the world. It is one of the least biologically diverse places on the planet due to its harsh climate and damages from human activity (hunting, industrial pollution, military action). But just a few tens of thousands of years ago, it was home to a large number of shallow lakes that supported a diverse community of animals, including hippos and water buffalo.” (Shea Gunther, http://www.mnn.com/earth-matters)

The BBC report also quoted from the original article:

“…the monsoon pushes further into Arabia every 23,000 years, allowing plants and animals to flourish. The findings are published in the journal Geology. (www.bbc.com/earth/)

Our findings, published in the journal Geology have shown that wet climatic periods in Arabia were not driven by global ice volume changes during interglacial conditions every ~100,000 years. Instead, the quarries at Al-Ain demonstrate that the vast alluvial fans along the western Hajar and Oman Mountains became active approximately every 23,000 years since at least ~160,000 years ago. These wet periods were triggered by periodic northward shifts in the position and strength of the Indian Ocean Monsoon, driven by subtle changes in the Earth’s orbit every ~23,000 years. During these times, the vast Arabian deserts were transformed into landscapes littered with freshwater lakes and active river systems, providing ample opportunities for humans to disperse across the region en route to the rest of Eurasia. (http://britgeopeople.blogspot.com/)

There remains now the coming true of the second half of the Prophet’s prediction: a time will come when the Arab land will once again turn into lush green gardens dotted by rivers. This, too, is now being predicted by none other than geological sciences.

The truth of the truthful is self-evident; and, if the truthful is a Messenger, then, all the more so. But, problematically, and a consequence of the skepticism, when you run through a Prophet’s predictions, you run into a problem. The truth is not visible to the physical eye. It is visible to the inner eye alone. Moreover, like certain members of Allah’s creation in the animal kingdom, the inner eye flashes out light, though a light devoid of photons, in which light you see a lot of truth. If the inner eye has gone blind, the noon light of the sun in the desert does not reveal much.

“Is he then whose heart Allah has opened for Islam, so that he is on a light from his Lord (equal to him who is stumbling in the dark)?” [39: 22]

Believers see the truth of Prophetic predictions from the flashes of their inner eye. When a prediction is proven true, by external means, they are happy, not because the prediction came true, they always knew it was true, but because their trust in the Prophet came true.