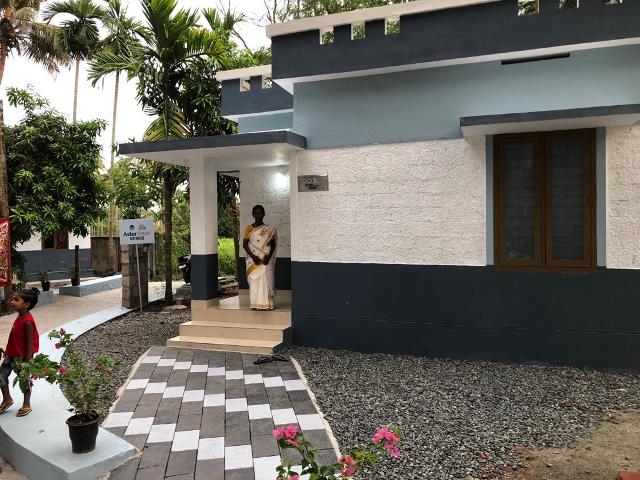 Dubai, 25th April – 2019: The first set of cluster houses, built as a part of Aster Volunteer’s efforts to Re-build Kerala were handed over to the beneficiaries. These were built in association with Rotary Cochin Harbour under the Aster-Rotary Homes project. The keys were handed over by actor Aparna Balamurali at a function held on Wednesday. Eight houses were built at Velankanni Matha colony, North Kuthiyathodu at Kunnukara Panchayat in Kalamassery assembly constituency.

Kalamassery MLA V. K. Ibrahim Kunju inaugurated the function, which was presided over by Francis Tharayiil, President, Kunnukara Grama Panchayat. T. J. Wilson, Executive Director & Group Head Governance & Corporate Affairs, Aster DM Healthcare; A. V. Pathy, Rotary District Governor; Architect Shankar and C. V. Ignatius, President, Cochin Harbour Rotary were also present on the occasion. The cluster houses were jointly built by Aster Volunteers and Rotary Cochin Harbour for people who lost their houses in the last year’s flood. This is a part of the 75 houses which are being built by Aster DM foundation in association with Rotary International.

“The handing over of Aster Rotary Homes is a significant moment for Aster Volunteers as we are able to partially fulfill the promise we made to the people affected by the devastating floods last year. The handover of the first set of houses at Kuthiyathodu marks the beginning of the fulfillment of the dreams of many victims who have been trying to get their lives together after the floods took everything from them. In this journey, it has been our privilege to partner with Rotary International,” said Dr. Azad Moopen, Managing Trustee, Aster DM Foundation and Founder Chairman and Managing Director, Aster DM Healthcare.

Inaugurating the function, V. K. Ibrahim Kunju MLA said that the private sector has been providing great support for the initiatives taken by the government to enable flood-hit people to stand on their own feet. The foundation stone for Aster- Rotary Homes was laid down by actor Jayasurya on February 25, 2018.

Aster Homes project was announced in September 2018, with an aim to build 250 homes for people affected by the floods. Out of these, Rotary International has joined hands with Aster Volunteers to build 75 homes to be rebranded as Aster Rotary Homes.