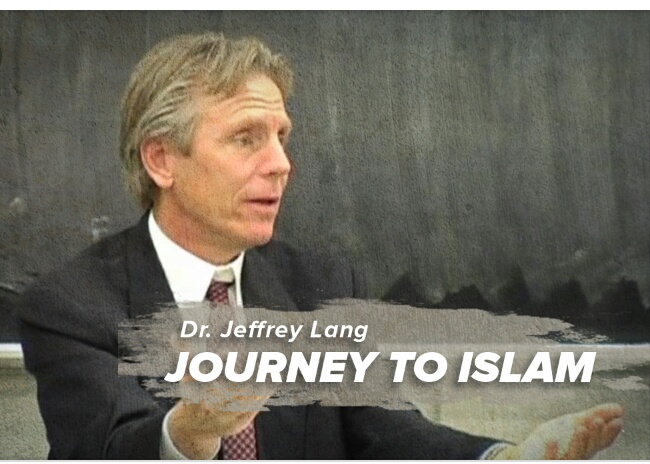 Dr. Jeffrey Lang is an Associate Professor of Mathematics at the University of Kansas, one of the biggest universities in the United States. He started his religious journey on Jan 30, 1954, when he was born in a Roman Catholic family in Bridgeport, Connecticut.

The first 18 years of his life were spent in Catholic schools, which left him with many unanswered questions.
Like most kids back in the late 60s and early 70s, I started questioning all the values that we had at those times, political, social and religious
I rebelled against all the institutions that society held sacred, including the Catholic Church.

By the time he reached the age of 18, Lang had become a full-fledged atheist. “If there is a God, and He is all merciful and all loving, then why is there suffering on this earth? Why does not He just take us to heaven? Why create all these people to suffer?”

Such were the questions that came up in his mind in those days.
As a young lecturer in mathematics at San Francisco University, Lang found his religion where God is finally a reality. That was shown to him by a few of the Muslim friends he had met at the university.

“We talked about religion. I asked them my questions, and I was really surprised by how carefully they had thought out their answers,” Lang said.

Dr. Lang met Mahmoud Qandeel, a regal looking Saudi student who attracted the attention of the entire class the moment he walked in. When Lang asked a question about medical research, Qandeel answered the question in perfect English and with great self assurance. Everyone knew Qandeel – the mayor, the police chief and the common people.

Together the professor and the student went to all the glittering places where “there was no joy or happiness, only laughter.” Yet at the end, Qandeel surprisingly gave him a copy of the Quran and some books on Islam.
Lang read the Quran on his own, found his way to the student-run prayer hall at the university, and basically surrendered without much struggle. He was conquered by the Quran. The first two chapters are an account of that encounter and it is a fascinating one.“Painters can make the eyes of a portrait appear to be following you from one place to another, but which author can write a scripture that anticipates your daily vicissitudes?…

Each night I would formulate questions and objections and somehow discover the answer the next day. It seemed that the author was reading my ideas and writing in the appropriate lines in time for my next reading. I have met myself in its pages…”

Lang performs the daily five-time prayers regularly and finds much spiritual satisfaction. He finds the Fajr (pre-dawn) prayer as one of the most beautiful and moving rituals in Islam. To the question how he finds it so captivating when the recitation of the Quran is in Arabic, he responds:
“Why is a baby comforted by his mother’s voice?” He said reading the Quran gave him a great deal of comfort and strength in difficult times. From there, faith was a matter of practice for Lang’s spiritual growth.

On the other hand, Lang pursued a career in mathematics. He received his master’s and doctoral degrees from Purdue University. Lang said that he had always been fascinated by mathematics. “Math is logical. It consists of using facts and figures to find concrete answers,” Lang said. “That is the way my mind works, and it is frustrating when I deal with things that do not have concrete answers.”

Having a mind that accepts ideas on their factual merit makes believing in a religion difficult because most religions require acceptance by faith. Islam appeals to man’s reasoning.”As faculty advisor for the Muslim Student Association, Lang said he viewed himself as the liaison between the students and their universities. He gets approval from university authorities to hold Islamic lectures.“The object of being their faculty advisor is to help them get their needs met as far as adjusting to the American culture and to procedures of the university. They appreciate the opportunity to have misconceptions corrected.”

Lang has written several Islamic books which are best sellers among the Muslim community in the US. One of his important books is “Even Angels ask; A Journey to Islam in America”.In this book, Dr. Lang shares with his readers the many insights that have unfolded for him through his self discovery and progress within the religion of Islam.