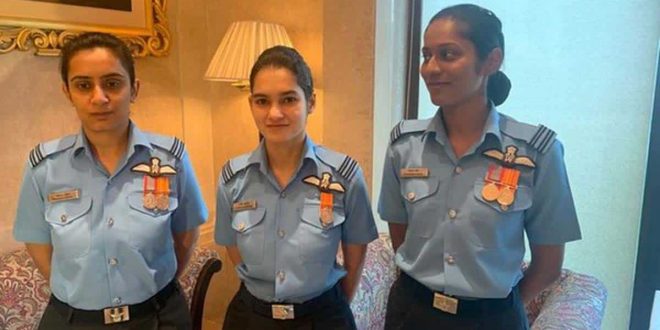 The trio was inducted into the IAF’s fighter squadron after the Government of India decided to open fighter stream in the force for women on an experimental basis.

The three were first to be inducted into the squadron and conduct a solo flight in MIG-21 in 2018. The three expressed their desire to serve the nation and hoped to achieve more laurels in the forthcoming years.

Avani Chaturvedi completed her training in Hyderabad Air Force Academy. She has been posted to No. 23 Squadron (Panthers), Suratgarh in Rajasthan and was promoted to the rank of Flight Lieutenant in 2018.

Avani has earned an honorary Doctorate in 2018 conferred by Banasthali Vidyapeeth.

Bhawana Kanth, born in Bihar’s Darbhanga, has completed her BE (Medical Electronics) from BMS College of Engineering in Bengaluru.

She has been posted to No 3 Squadron (Cobras), Ambala in Haryana. She completed her fighter pilot training and got commissioned in 2016.

Born in Agra, Mohana Jitarwal did her schooling from Air Force School in New Delhi.

Share
Previous 5 Ultimate Self-Defense Techniques for women
Next Coronavirus: How to self-quarantine, protect others