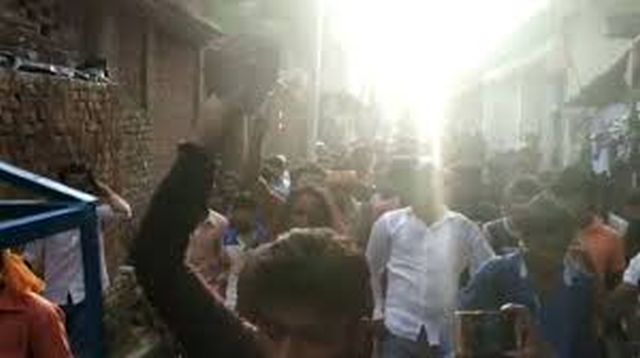 India’s new social justice system through lynch mob that’s making hay while sun shines, has resonance in Bihar as well. This time their target was a helpless woman who was stripped and paraded naked on the streets of Arrah town.

The most conspicuous part of this justice system was the mood of the lynch mob that was captured in their mobile cameras this shocking and horrifying act very gleefully.

The reason for this public outrage was the death of a 19-year-old boy called Vimalesh Sah, from Damodarpur village, in Bihiya police station of Bhojpur district headquartered at Arrah.

The boy had gone missing since he came to Arrah for some work. Later, his strangled dead body was found near a railway track that had injury on his private parts. The needle of suspicion of the irate mob fell on this fallen lady and it was alleged she had a hand in boy’s death.

It is alleged that Vimalesh was last seen with this women who lived in the red-light area of the town. Some suspect that the boy had visited her place for sexual gratification but in the process had picked up quarrel with the locals there. The resultant altercation proved to be fatal and boy was thrown at the nearby railway track.

Vimalesh dead abandoned dead body was seen by some people from his village and led to the formation of an irate mob. They suspected that the women with whom Vimalesh was seen last, may have a role in his death. The crowd, mostly comprising of youth from Vimalesh’s village stormed into this woman’s house dragged her out on the street. They ripped off her clothes, kicked and slapped and paraded her naked. The woman was saved from being lynched at the nick of the time by the state police.

Meantime, the boisterous crowd had done enough damage to the public property. They set on fires a number of shops and beaten up several residents of the locality and hurled stones at a train passing through that area. It was free for all and all and sundry were involved in the act.

There are two dangerous trends that come out vividly from this story. One the growing assertion of mobocracy in the country, which has no regard for the rule of law and second the treatment of women by some unwanted elements of the society.

This episode is just an addition to the otherwise growing list of lynch crowd outrage targeting women in India. On June 30, 2018 a married woman, who was living in a rented house in the in the Palam locality of Delhi, was attacked by an irritate mob that stripped her and paraded her naked in the broad daylight. The locals instead of helping the helpless woman took videos of the incident.

On December 7, 2017 a woman who helped the Delhi Commission for Women (DCW) and police to bust an illicit liquor racket in outer Delhi’s Narela area was allegedly beaten and her clothes torn by those who were involved in the bootlegging.

On May 18, 2015, in Shahajhanapur’s Hareva village in Uttar Pradesh five Dalit women were forced out of their houses, stripped and paraded naked on the streets. The dispute arose over the elopement of an OBC girl with a Dalit boy in the village.

The list of such crime is long and it is illustrated just to assert the point that how vulnerable are women folk in the Indian society.

One fails to understand whether the women folk in the country are women first or Hindu first? Why they are not protesting and making outcry against such crimes that are growing fast in the country. The plausible reason could be, the Hindutva movement looks to have silenced them all from raising their voice against all such social injustices.

Last but not the least, the Kerala floods, Vajpyee’s death and Navjit Sidhu’s trip to Pakistan are considered to be more important news by the media then this news of public degradation of a woman in the country.

Just watch this shocking video and see for yourself the assertion of mobocracy in our country. The lynch mob is committing heinous crime under the garb of being a part of the crowed. They are emboldened that no one can rein them and they can do whatever they want to do. See in this video how the mob is treating this woman.

It’s a national shame and ordinary citizen is gasping what is happening in this country? When will the ‘Ache Din’ come, that was a clarion call in 2014?

(Syedalimujtaba is a journalist based in Chennai. He can be contacted at syedalimujtaba@yahoo.com)