Jharkhand mob-lynching : Victim families demand due compensation and no bail to eight convicts 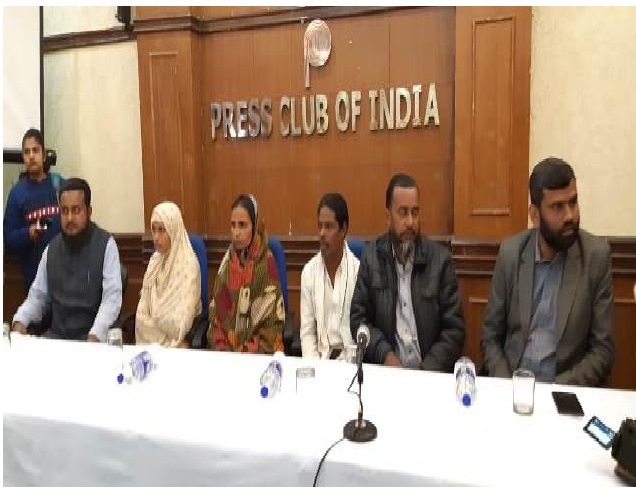 New Delhi: After a court in Jharkhand convicting eight persons for lynching  Mazloom Ansari, 32, and Imteyaz Khan, 13, the families  of both the victims on Wednesday knocked the doors of the national capital  to demand financial assistance and jobs from the  Jharkhand state government as it has failed to do justice  with them.

The family members of  the two cattle traders, who were beaten to death in Jharkhand’s Latehar district in March 2016, addressed the media at the Press Club of India here. after two years trial,last week,  the eight  so-called cow-vigilantes  convicted and awarded life imprisonment by a court in Jharkhand for lynching Ansari, and Imteyaz Khan.

Expressing satisfaction  over the Session court  verdict, Saira Bibi, widow of Ansari said that she had been receiving threats even after all the convicts were awarded life sentence. she said her husband was a sole earning-member of the family of five children and the family has lost their lone breadwinner . Ansari is survived by his wife and five children.  she said the state government must give due compensation to my family as it is the duty of the government to provide monetary help in such cases.

“I demand appropriate compensation and a job from the Jharkhand government. Where should I go for help? I do not have money to feed my children,” Saira Bibi said.

She also said  the judgment has also increased the  faith in the Indian judicial system.  Imteyaz Khan’s mother Najma Bibi said her son was just 13-year-old when he was beaten to death.

“We are living under the shadow of fear. My elder son has left his home and started working in Ranchi due to threat to his life. My younger son has also stopped going to his school,” she said.

“I request the government to provide proper security to my family. Also, the state government should provide financial assistance and a job to us,” Najma Bibi added.

She further said she was the only child of his parents and she has no brother and  there is no one who can give support to my parents and children after him.

“I have no job to do and my family has to face many problems. I don’t any house and I live with my parents in their house”, Saira told the reporters.

Mazloom’s  brother Afzal Ansari  also  said  that they have been   facing  many problems after the incident.

“Mazloom Ansari was the only source of income in the family and the family has been broken after his death. He has left 5 children behind him. He was not only supporting his family, but also cared his in-laws,” Afazl said.

Azad Khan, the father of Imtiyaz Khan and his mother Najma Bibi told that their son was only 13 years old when he was lynched. He was in 6th standard at that time and also helped his father in his work. The father has to close his work because of the fear from the killers. Now the family is facing very bad financial condition.

Imtiyaz’s younger brother has left the school and says those who killed the brother can also kill me. Imtiyaz was very loving to his whole family. The father Azad Khan said that he has a small piece of field and nothing else for their livelihood. “I have two daughters to get married, but don’t have money for the arrangements of their marriage.

Both of the families demanded the Jharkhand High Court should  not to give bail to convicts, as those who were involved in Aleemuddin Ansari lynching case in Ramgarh. If they get bail by the court our lives will also be in danger, they said.

They said they had not get any adequate compensation from the state government. Latehar SP and collector offered them a cheque of one lakh rupees, but they refused to take it as it was a meager amount.

While accompanying  the families,   advocate Saifan Shaikh informed  that  the Popular Front of India has filed a writ petition before the Ranchi High Court for an adequate compensation on behalf of Saira Bibi, the widow of Mazloom Ansari and Azad Khan, the father of Imtiyaz Khan. The court directed the Jharkhand State Legal Service Authority to investigate and to give adequate compensation and to inform the court with the same. However, the JSLSA did not take any action in this case without any reasonable cause, he said.

” Now we are preparing to file a petition against contempt of the court order. The court suggested us to file a separate petition for the government job. If the culprits appeal to the High Court against the sentence, we will object it legally.”

Mohammad Hanzala Shaikh, Jharkhand state president of Popular Front, said  the organization visited the family on the very third day of the incident in 2016 and offered them  legal support. He said the Front will always stand with the victims’ families.

Families  also  thanked the media for this victory, which did not let this case to die. They  also thanked Popular Front of India as well for giving legal support from the beginning in their legal fight.

It is to recall that  Mazloom Ansari and Imteyaz Khan’s bodies were found hanging from a tree on March 17, 2016. They were reportedly taking their cattle to a village fair for sale when they were attacked. Police had said that they were beaten to death and then hanged from the tree.