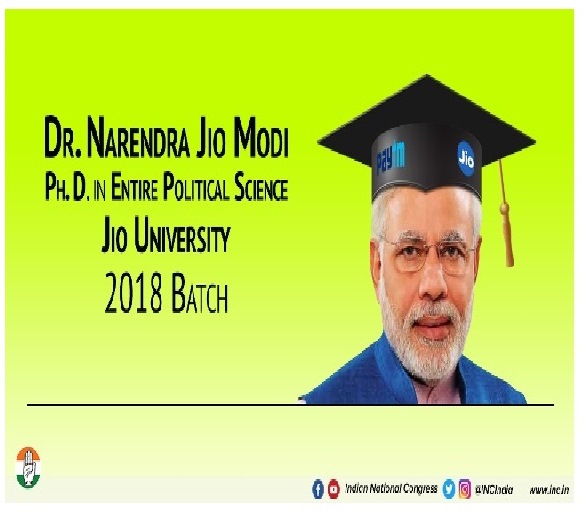 New Delhi: The  Ministry of  Human Resource Development’s decision of according ‘Institution of Eminence’ status to the top corporate honcho Mukesh Ambani’s  Reliance Foundation’s Jio Institute has attracted sharp criticism from opposition parties. The  CPI(M) on Tuesday   said it strongly opposes the move by the Modi government to accord this status calling it ” Bogus Status of Eminence”. The Congress also opposed the move questioning the criteria followed for the status.

Earlier the government had announced that twenty institutions, ten each of the public funded institutions and in the private sector, would be selected as institutions of eminence. A committee headed by former Chief Election Commissioner N. Gopalaswami was tasked to identify these institutions. The entire exercise and the considerations have remained largely outside the public domain. The MHRD has now come out with an announcement that the total number will be reduced from twenty to just six and one of the chosen three private institutions is Reliance Foundation’s Jio Institute.

For an institution to stand the test of time and evolve into a truly ‘world class’ institution of higher learning and research is a challenging process. It takes great perseverance and creativity to earn that tag of eminence.

Reacting on the decision, the Polit Bureau of the CPI(M) said it is bewildering that the Jio Institute, which is” non-existent and notional’, has been given that status solely on a ‘drawing board’ projection.

Condemning the  move, it said  the decision  cannot be construed as anything but “brazen cronyism”.  It will have a debilitating effect on the entire sphere of higher education underlining the obsession of the government to promote privatisation and undermining public funded higher education, the party added.

The Congress  also echoed the same views saying “any institution which is seeking such status must establish its credentials by various acknowledged established tests.

Congress spokesperson Dr. Abhishek Singhvi  said we are not bothered about individuals but wanted to make sure that it has adequate infrastructure.

“What are those tests? Adequate infrastructure, outstanding faculty, credible research output, a place of prestige in the academia. This is the obligation of the Government and the HRD Ministry and till now apart from a lot of talk, we have not seen great achievements in this regard by the HRD or the Government”, he added.

The Social Democratic  Party of India said  by this move,  the Modi government has openly  proved that it favours corporate likes of   Ambani and Adani. SDPI vice president Advocate Sharfuddin Ahmad said it is unfortunate that  the present government has been weakening every institutions in the country in order to consolidate its hold on  power.