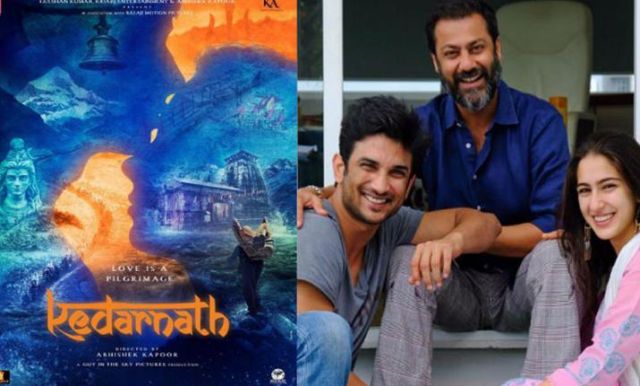 New Delhi : Seeing a Muslim porter carrying a Hindu pilgrim on his back — something that speaks a lot about India as a country — left a seed in Abhishek Kapoor’s heart and mind to tell a tale of “harmony” with his forthcoming Hindi film “Kedarnath”.

A firm believer of Lord Shiva, Kapoor has urged those opposing “Kedarnath” to have patience and faith in him. Reacting to the ‘Love Jihad’ controversy that the film has been caught up in over the romance between the lead characters — a Hindu girl and a Muslim boy — he says the movie is his “pure attempt to create harmony and more understanding”.

A BJP leader had sought a ban on “Kedarnath” for promoting ‘Love Jihad’.

Was he prepared to face such concerns while he was shooting the film?

Kapoor told IANS during a tete-a-tete in the capital: “You do consider stuff like that can happen, but the idea is not to titillate them (movie-goers) in a certain sense or the idea is not to create a controversy. This film is genuinely a very pure attempt to create harmony and more understanding amongst ourselves.”

However, he feels that if someone is going to find faults and tries to take advantage of the situation, he can’t help it.

“One’s attempt is to do something (with a film) that has not been done before and you have to have some courage. To answer all those people out there who are skeptical, they should know that there is nothing that they should worry about. We have not made a film that will offend anyone. If at all, they will see each other with more understanding and more love.

“I would request them to have patience, to have faith in me because the way they love Hindu religion and want to protect it, I also want to do the same. I am also a follower of Lord Shiva and love Hindu religion like anyone else. Hence, I won’t do anything that will disappoint people,” Kapoor said.

Written, directed and co-produced by Kapoor, the film tells the story of a Hindu girl who takes a pilgrimage to the historic Kedarnath Temple in the Uttarakhand mountains, where she meets and falls in love with a Muslim boy who becomes her guide.

As they grow closer along the journey, they face many obstacles, including familial disapproval and contrasting backgrounds. When the sudden rains of the 2013 Uttarakhand floods devastate the region, the couple are forced to survive against the elements and face the ultimate test of their love.

It’s not just the ‘Love Jihad’ controversy that the film has run into as the project has overcome many hiccups in its making. It was salvaged after Ronnie Screwvala took over the film from former producers Prernaa Arora, Bhushan Kumar and Ekta Kapoor.

In hindsight, Kapoor said: “There was fear and to put it lightly, they (the ones who were making it before) were just not qualified to run the show with me. They sounded pretty good in the beginning but in the longer run, I realised that they were not qualified for it.

“A movie has so many careers and so many lives at stake and once I am the owner of this film and I have brought the partner, I have to detach from them and secure my film. Tomorrow whatever the fate the movie will be — whether it is a hit or a flop, people will like it or dislike it, but as a filmmaker and as a person who is going to carry this burden, my duty is to secure the film to the end.”

Releasing on December 7, “Kedarnath” will launch Sara Ali Khan, the daughter of actor Saif Ali Khan and his former wife Amrita Singh. She has been paired with actor Sushant Singh Rajput.

“The intent is pure. The story is true and the characters and the actors have performed really well as I see it. The audience will decide what they have to decide but my conviction is pure,” he said.

Was Sara always in mind for this film?

“I never actually look at the cast before I have the story in place. The story did emerge first. As a kid, I used to go to Vaishno Devi very often and I didn’t have that much of faith then. So after my last movie, I had a trip there. On one such trips, to see a Muslim porter carrying a Hindu pilgrim on his back, was a vision. If you look at it and see what it stands for, it tells you what this country is all about.” Kapoor said.

(Nivedita can be contacted at nivedita.s@ians.in)