Kolkata: Demanding and equal and fair treatment with the Unani medicine in West Bengal, the All India Unani Tibbi Congress reiterated its long-pending demand of elevating Delhi-based Tibbia College to University level at the first International Seminar on the role of Unani medicine organized here on the occasion of the birth anniversary of Masih-ul-Mulk Hakim Ajmal Khan.

Inaugurating the seminar, West Bengal Governor, Keshari Nath Tripathi said there is a need of a stern and stringent law for dealing with the adulterers who are playing with the health of common people by adulterating foods and medicine. He praised the effectiveness of the Unani system of medicine suggesting that it should be popularized among the masses as many people are still not aware of it which has been available in the country for a long time.

“One thing that must be remembered is the fact that this methodology which utilizes nature’s richness is effective in eradicating chronic and complicated diseases from the root. It is safe, as well as highly effective,” the Governor said.

In his speech, the governor Tripathi also paid rich tribute to the stalwart of freedom movement and the architect of Unani medicine and Ayurveda Hakim Ajmal Khan on whose birth anniversary was observed as “World Unani Day” in the country every year.

Hakim Ajmal was not only a legendary physician but also a renowned freedom fighter who was also one of the founders of Jamia Milia Islamia Delhi, Tripathi said. He also said it is praiseworthy, the way the Naturoveda has been reaching out the benefits of Unani Treatment to the masses.  The Naturoveda Group is Kolkata based a company which sponsored the function.  Apart from Unani, the role of Ayurveda and Yoga utilized by the company in combination is also commendable, Tripathi said.  He also showered praise on Khalid Md Saifullah, the Chairman of Naturoveda Group, for his new experiment.

International Seminar ‘on “The role of Unani Treatment in Eradicating the Disease from its Root”’ was organized by AIUTC west Bengal unit in collaboration with the Naturoveda Group attended by  Unani doctors, researchers and scientists across the country as well as from Bangladesh. 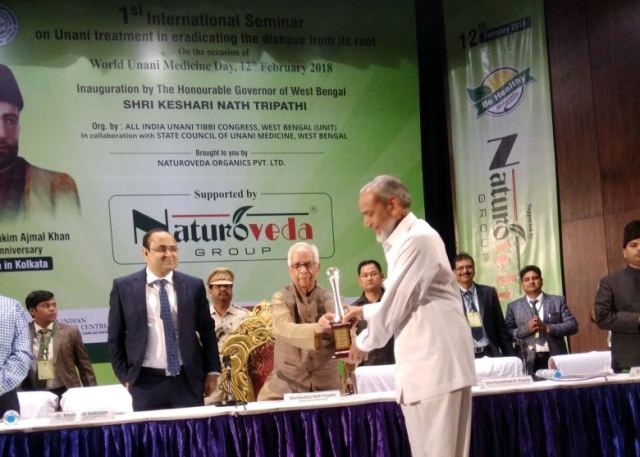 Speaking on the occasion, Dr. Syed Ahmad Khan, General Secretary of All India Unani Tibbi Congress, has pointed out weak Unani infrastructure in West Bengal where a supposedly secular party has been in power. Dr. Khan said there was not a single government Unani college in the state and not Unani official in the State AYUSH department. He also said that there is a need of setting up at least two Unani clinics in each district of the state and filling up the vacancies in the Government-run Unani clinics across the state.

In the presence of the governor and the Union Minister of State for Panchayati Raj, Agriculture and Farmer’s Welfare, Parshottam Rupala, Dr. Khan reiterated the AIUTC’s old demand of making the Tibbia college as a deemed university which was founded by Hakim Ajmal Khan. It would be a befitting tribute to Hakim Ajmal Khan if the college is elevated to university level, he said.

On the occasion, Dr. Khan was also awarded “Shaan-e- Tibb Award’’ in recognition of his services for the promotion of the Unani cause. The Award was presented to him by the Governor.

Trinamool Congress MP, Ahmed Hassan Imran said the Unani system is the best system to cure the chronic diseases.  Hosting the first Unani Seminar is a honor for Kolkata, he said.

Dr. Mohammad Nizamuddin and Dr. Mojibur Rahman, president and General Secretary of All India Unani Tibbi Congress (West Bengal Unit) respectively, said the Unani Tibb needs due attention from the West Bengal government for its progress in the state as they pointed out that Ayurveda has been given all official patronage by the government.

The Seminar also passed a resolution demanding to declare the Ayurvedic & Unani Tibbia College, New Delhi into Hakim Ajmal Khan Deemed University”. Apart from this, it also demanded to create a post for Deputy Director in the Unani division of AYUSH Department of West Bengal and to establish a Government Unani Medical College in the state.

Share
Previous Swamy slams Owaisi over Muslims’ patriotism
Next If the situation worsens Jamiat Ulama and Muslim Board will be responsible, warns Salman Nadvi