Mr Lutfi Hassan is Founder Chairman of the Apex group of companies and a senior member associated with the Democratic Party of the United States of America.

Mr Hassan  took oath as the Chairman of the Gandhi Mandela Foundation for the Americas (United States and the Continent), said a press release of Foundation. 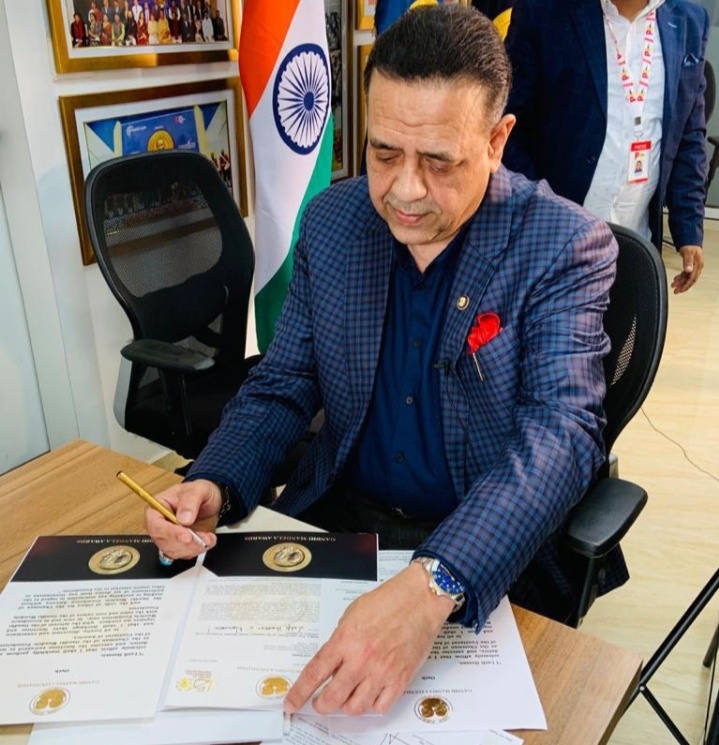 On his new role Mr Hassan said, “My job would also be to involve younger generation, my children, my grandchildren and generations to come, I would like them to know what GMF is all about, and get them engaged. I see a lot of young people here, who are very excited to be part of this fabric, so similarly I would like to expand that in the United States and carry this mission through.”

This meeting was followed by lunch hosted in honour of Mr Lutfi Hassan at the Shangri La Hotel, New Delhi. The team was joined by several other dignitaries. During this lunch meeting the team discussed further plans for the Gandhi Mandela Foundation global expansion.

Mr Lutfi Hassan, is an established civic leader representing the South Asian community in mainstream American politics. Mr Hassan has served as an advisor on Presidential, Gubernatorial, Senatorial, Congressional, Mayoral and Judicial campaigns in the United States. He has served as a national finance co-chair for the Obama for America campaign in both 2008 and 2012. Over the years, Mr. Hassan has also served on the National Advisory Board (NAB) as a member of Democratic National Committee. Most recently, Mr. Hassan served on the board of advisory for South Asians for Biden. He was one of the select few who were invited at the Biden-Harris inauguration ceremony.

The Foundation instituted the Gandhi Mandela Awards during the 150th birth anniversary of Gandhiji to celebrate those who have carried forward that the legacies of Mahatma Gandhi and Nelson Mandela. The Chairman of the Foundation is India’s hindu spiritual leader Swami Avdheshanand Giri Ji Maharaj, Patron Swami RamDev. The Jury committee includes former Chief justices of three countries (India, Nepal & Bangladesh).