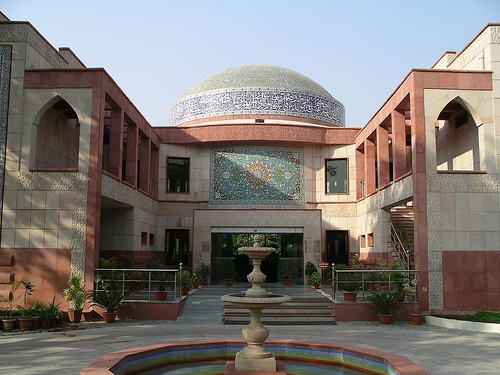 New Delhi: Mohammed Wazir Ansari, who is contesting for the post of Member, Board of Trustees at India Islamic Cultural Centre (IICC), has registered a complaint with Returning Officer regarding gross malpractices, unethical means in the ensuing election to  the governing body of  IICC.   Ansari , who is a former Director General of Police) Chhattisgarh,  and is an IPS officer of 1984 batch, has pointed many glaring examples of malpractices to the election officer.

“ How it is possible to get 253 Postal Ballot Papers undelivered till 27th of December and this would may go up to 600 to 700 hundreds in number by 5th of Jan 2019. i.e. the last date of receiving of postal Ballot Papers”? He asked.

Giving a detail list of irregularities, Ansari urged the Returning Officer  Tapas Kumar Bhattacharya to  address these complaints and irregularities without further delay  and he should ensure  for conducting the free, fair, just and transparent election.

Below is the text of his complaint to the Returning Officer

Sir you have rightly agreed and conveyed in writing that some mischief has been done. You should, however, have been more forthright, straight & honest in agreeing that gross malpractices, unethical means and an attempt has been made for bogus voting, otherwise, how it is possible to get 253 Postal Ballot Papers undelivered till 27th of December and this would may go upto 600 to 700 hundreds in number by 5th of Jan 2019. i.e. the last date of receiving of postal Ballot Papers .

Sir, you have mentioned also that out of 3214 registered letters issued to members intimating about the election Programme, about 326 letters were received undelivered and of those about 170 belongs to out of Delhi voters. The % (Percetage) of undelivered letters is very very high i.e. 10.14%. As per your written communication 156 letters belongs to Delhi IICC voters (Members). Why don’t you fix up as to who was responsible for updating the voter list and if he is part of this election, he should be made answerable. Don’t you think the % is very high and it is very much part of manipulation.

I have checked up also with higher officials of Postal Department and as per his/ their version, this is not possible unless and until the whole thing is being done in connivance with and in a conspirational way to adopt the malpractices in flagrant violation of all the Rule and Regulation of election laws.

The Bar Code which has been generated on fake envelops under which Scraps/ Raddi / News Papers/ Cartoon Magazines etc sent in the name of Hitesh Kumar or “By Hitesh Kumar,Tower1/108, Uniworld garden, Sector 47, Gurgaon Haryana” is the same in your Dispatch Register and the returned undelivered envelops having enveloping inside Postal ballot Papers bears the same Postal Bar Code which is just not possible unless someone from your office or employee of IICC under the influence of officiating office bearers have worked  to influence the election process to favor the officiating office bearers   who are also contesting in the election.

All those officials who are responsible for manipulation and influencing election process, should be brought to book by getting registered criminal case against them as this is very serious matter and no one should be spared otherwise till the end of election, they will keep on doing more serious mischief with IICC election process. Those who have been assigned to get envelops of Postal Ballot Papers ready and to post it with registered post and have interacted / visited Post office, need questioning and proper interrogation as to how these all have happened.

Further to your utter surprise I would like to state that I have issued appeal to 1200 to 1500 potential voters of IICC and out of these, I have also received back my appeal letter, by now more than 200 to 250 proving that your office has provided me an old and not updated voter list where as my rival group candidates are having the updated voter lists with latest Mobile Numbers, Email, and changed Addresses etc. I would like to know as who has done it  in your office and who is officiating office bearers who is responsible for  updating, what action has been taken against him.

I would like to raise another very important and relevant point if this is the “state of affair in IIC election office” “Tender vote would be very high”.

In case there is going to be a tie in two candidates or won / lost / defeated with a very very narrow margin or a numerical myopic Numbers of votes and the number of Tender vote is very high then how to reconcile with justice and can we say that this election is just and fair and has been conducted in transparent manner.

I presume that there are many candidates who have made complaints to you on the above mentioned issues or on some other points or many have other grievances pertaining to Elections process.

These complaints / Irregularities must be addressed without further delay and proper action should be taken to conduct the free, fair, just and transparent election.

I have raise the same issues / complaints even in last election and despite of my repeated requests to cleanse the irregularities/ malpractices in IICC Election the same was not meted out.

These all irregularities/ malpractices is being done and in full view and within the knowledge and in connivance with officiating office bearers. They are fully aware that Postal Ballot Papers are easily managed not to be delivered to concerned IICC voters. Postal Ballot papers are Hijacked / Stolen from Post office. The gullible Postman / Dakia is managed to deliver not to addressees rather returned it to IICC which are again Hijacked/ stolen /manipulated at IICC office level.

Finally, since you have already agreed and have experienced and observed that malpractices have been done, you are, therefore, kindly requested to get registered criminal case against those who are responsible and must suspend them and keep them away from election work.

Before 6th January i.e. the before date of voting all complaints should be properly addressed and disposed off otherwise this election would be again farce and bogus one.