Mumbai: The President of the All India Majlis-e-Ittehadul Muslimeen and member of parliament from Hyderabad Asaduddin Owaisi is facing severe criticism over his decision for   fielding  51 candidates  to contest the assembly across  Maharashtra.

Khan is contesting as an independent candidate from South Mumbai’s Byculla constituency against AIMIM candidate and sitting MLA Waris Pathan.

Earlier Khan wanted to get AIMIM ticket from Mumbra constituency, but was refused.

Owaisi is facing serious allegations since AIMIM decided to contest 51 out of the 288 assembly seats in the upcoming Maharashtra assembly elections scheduled to be held on 21 October. 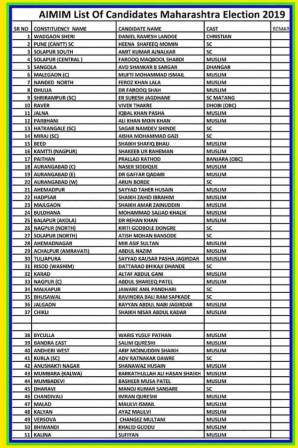 In 2019 Lok Sabha elections Vanchit Bahujan Aghadi (VBA) and AIMIM came together to contest 48 parliamentary seats. In the alliance seat sharing arrangement the MIM was allotted one seat and VBA 47.The AIMIM’s Imtiaz Jaleel won the Aurangabad seat but the VBA failed to win any seat.

In 2014 state polls, AIMIM contested 24 seats and had won just two. This time AIMIM decided to go alone due to seat sharing issue with   Prakash Ambedkar and fielded 51 candidates in the state.

‘Owisi always looks for his own benefits. He may get a couple of seats but ultimately BJP will be the biggest beneficiary of his politics, he is least bothered about the current  scenario of the country  in fact AIMIM and BJP strengthen each other,  said Tanweer Alam, President, AMU Alumni Association of Maharashtra (AMUAAM).

MIM never contested more than seven assembly seats in Telangana but the party has fielded  51 candidates across Maharashta , the purpose is  clear Owaisi is indirectly helping BJP/Shiv Sena alliance. From Chidambaram to Azam Khan , BJP didn’t spare anyone but Owaisi never faced any problem , said Congress leader Nadeem Javaid while addressing an election meeting in Nagpur.

‘There is nothing like ‘Muslim empowerment’ in politics of Owaisi, he is just spoiling and dividing Muslim votes can you imagine he has fielded MIM candidate from Jalna which has only 12% Muslim votes. There were 17-18 Muslim MLAs before entry of AIMIM in Maharashtra elections, now the number is almost half , said Sikandar Sarwar a journalist from Aurangabad.

The decision to field such a huge number of candidates is sending a negative image of Owaisi in the community. He should have applied his mind and acted with responsibility, said Ansar Ahmad , an engineer from Latur.