With the aim to guide Haj, Umrah pilgrims , Azim Nawab Ansari a  Dhulia  based driver in Maharashtra , has designed a wonderful model of Haram Sharif.

The model has been handed over to Haj Committee of Maharashtra in the month of February during a formal function in presence of  minority affairs minister ,  Mukhtar Abbas Naqvi, CEO Dr. Maqsood Khan, Shaikh Jinah and other dignitaries.

Speaking to Muslim Mirror , 40 year old Azeem Ansari said that during his Umrah visit in Nov. 2018 he faced lot of difficulties  while performing Umrah and others rituals , despite being an engineering student he had to struggle a lot to understand the map of the Haram Sharif . Then and there only, he decided to design a model to train would be Indian  pilgrims  in much better way, in order to do all the Haj Umrah formalities, he added. 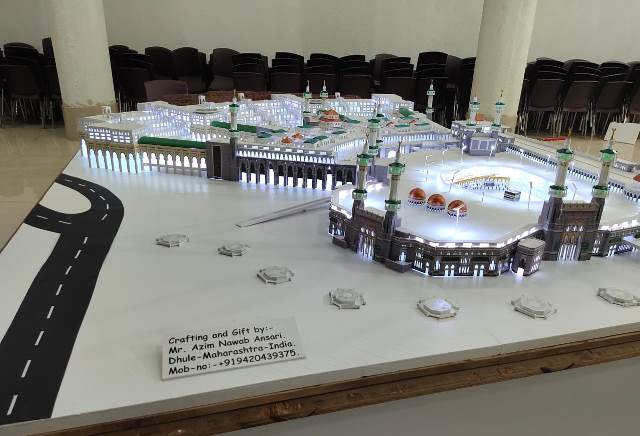 Azeem further informed, he had earlier designed a small sized model which was appreciated  by Haj Committee  members and it  took  one month to develop a jumbo sized model.

He said,10.5×8  feet model is fully made  of foam sheets and it took one long month to get completed.

“My wife Rozi helped me a lot in sheet cutting and other preparations”, He said, they used to work about 16 hours a day,it cost him Rs.20000 . After handing it over on 16 February, Haj Committee offered me compensation but I refused to take because I did it for the sake of Allah and to assist pilgrims  in performing important duty  of Islam”, he added. 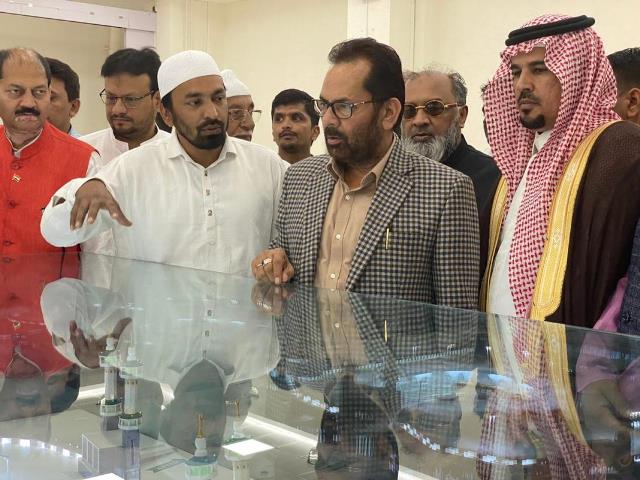 According to Azeem his model has become very popular on social media, getting lakhs of likes moreover some foreign web sites have uploaded this model.

Azeem is getting call of appreciations from Saudi Arab, Kuwait and several other countries.

Dr. Masood Khan, the CEO  of Haj Committee  has also appreciated  Azeem’s contribution towards Hajis . ‘This beautiful model will help us to train Hajis, hope that maximum people will get benefit of it, Khan said.

In a special function  Azeem Ansari and his wife Rozi were felicitated and their efforts got appreciation   by the Haj Committee of Maharashtra in presence of  minority affairs minister Mukhtar Abbas Naqvi and others.

Shaikh Jinah , the former  Chairman All India Haj Committee also   lauded the efforts of Azeem and his wife.

Azeem is a driver by profession; he owns a tempo truck, which is used for local goods transport.