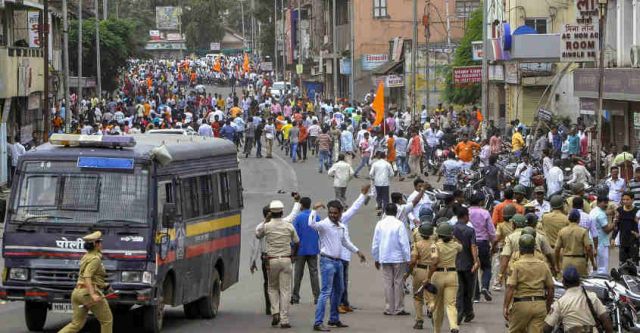 Mumbai : Maharashtra remained on the boil over the demands for Maratha reservation with fresh violence – arson, roadblocks, attacks on police – and shutdowns rocked several parts of the state on Monday while one person committed suicide by jumping under a running train.

Large areas of Chakan in Pune and its surroundings, Osmanabad, Solapur, Kolhapur, Nandurbar and Aurangabad witnessed sporadic incidents of arson, violence, road blocks and noisy processions on foot and on motorcyles, with prohibitory orders clamped in many police station areas.

In Aurangabad, Pramod Hore Patil committed suicide by jumping in front of a running train after posting his intention on Facebook.

He ended his life sometime on Sunday, but his body was recovered on Monday near Mukundwadi railway station, resulting in a shutdown in parts of the district. This is the third quota-related suicide in the violence-hit state in the past one week.

The main opposition Congress and Nationalist Congress Party convened urgent separate meetings of all their legislators to discuss the crises arising out of the continuing violence.

Leader of Opposition in the Assembly Radhakrishna Vikhe-Patil, of the Congress, told media persons that the MSBCC would take around three months to complete its ongoing survey on the economic backwardness of the Maratha community.

Leader of Opposition in the Council Dhananjay Munde, of the NCP, said the party has also written to Governor seeking his urgent intervention to resolve the quota crisis.

During the day, over two dozen vehicles, including five state transport buses were torched or damaged as the Maratha agiation took a violent turn in Pune district’s Chakan, Hinjewadi, Khed and the Pune-Nashik Highway today.

Angry protestors targeted the Chakan Police Station and in the resultant violence at least five policemen were injured, elsewhere in the town, three persons were hurt in stone-pelting incidents.

Police retaliated by firing teargas shells to quell the protestors and clamped prohibitory orders, while a total shutdown was observed in Chakan and other towns as all political parties appealed to the Maratha leaders for peace and restraint.

ST buses were also targeted in Solapur’s Pandharpur pilgrim centre and adjourning Kolhapur since midnight on Sunday-Monday, forcing a precautionary suspension of all ST services for the day as roads were blocked by squatting activists and burning tyres.

Activists attempted to set afire some vehicles and ST buses in Nandurbar but were thwarted by police though some parts observed a shutdown.

The Shiv Sena is likely to back the Bharatiya Janata Party on this specific issue and has urged the government to announce the quotas without waiting for the MSBCC report, or disturbing the existing reservations.

“Do anything but declare the Marathas quota immediately… Convene the special legislature session urgently, submit a proposal for constitutional amendments to the centre and resolve the crisis as the state continues to suffer,” Shiv Sena President Uddhav Thackeray told media persons.

Senior NCP leader Ajit Pawar has flayed the undue delays on the part of the government in announcing the quotas and demanded they do so without further delays.

Many Congress legislators have offered to resign en masse on the emotive issue but will await the final decision of the party high command, party sources said this evening.

So far, at least eight legislators from various parties including Congress, NCP, Shiv Sena and BJP have quit or offered to quit their posts for Maratha reservations.

Maratha Kranti Morcha convenor Vinod Patil demanded that the government must announce a time-bound programme to implement Maratha quotas by Tuesday (July 31), failing which the stir would be intensified from August 1.

Similarly, the Dhangars community has also demanded their share of quotas by September 1 or warned the authorities of an agitation.

Share
Previous Four years of Modi govt: Chronicling the dismantling of the ‘Idea of India’
Next I suffered by joining hands with Modi-led BJP: Mehbooba

Muslim Aid and Al Badr: There’s more to this than meets the eye

Al Badr- a terrorist organisation, was responsible for systematic execution of Bengali intellectuals who supported …