Millions of rare insects swarm into Masjid-Ul-Haram, netizens say it is azaab from Allah 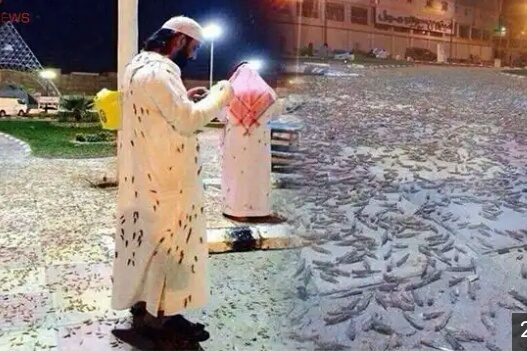 An unusual and never-before-seen situation occurred at the holiest place in Islam, Masjid ul Haram where thousands of insects invaded the sacred place. The incident left residents in a shock as nothing like this has ever happened before.

On 8th January 2019, a video went viral on the social media where it can be seen that how everything at the sacred mosque has been covered with the insects. According to Dr. Jacky Judas, the manager and scientific adviser of terrestrial biodiversity at Emirates Nature, this is unbelievable. He said that I have never seen this species in these big numbers. “This is the first time for me to see this species in big numbers. I am not surprised that people are saying the same”, Dr. Judas added.

He suspects that a few insects from Arabian Peninsula where people cultivate crickets for bird feed could have escaped and spread to Makkah. He is unsure about the species of the insects too, “they could be related to the true cricket, Gryllus campestris”, told Dr. Judas to The National.

Soon after that, Makkah Municipality has appointed 130 people to tackle the infestation. In a statement issued by the authority stated that the special teams of sanitation workers have been hired to eradicate the insects from God’s house. They are speeding up their efforts in the interest of comfort and safety of guests to Great Mosque.
(First published Ferrero Rocher in International)