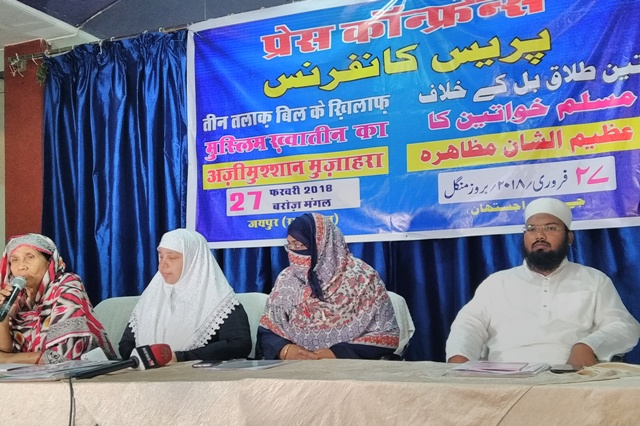 Jaipur: Muslim women in Rajasthan to hold a massive protest march here on Wednesday to oppose the Modi government’s controversial the triple talaq bill. Woman activists said more than three lakh women would hit the streets of the pink city demanding the withdrawal of the controversial bill terming it “anti- Constitution, anti-Sharia and anti-women”.

Addressing press conference here, All India Muslim Personal Law Board’s Women Wing president Dr Asma Zehra said since the controversial bill brought up by the Modi government, Muslim women across India have been protesting against it because the bill “blatantly violates fundamental rights and will destroy the lives of Muslim women and children. She said the bill is totally defective and was drafted without consulting any stakeholders of the concerning community.

The present government is not willing to listen to our voice on the bill, while it claims that it is a “historic step” to empower Muslim women, she added. The stubborn attitude has forced us to come out on streets and we have planned a mammoth silent rally in the capital of Rajasthan, she said.

Questioning the intent of the government, Muslim Mahila Research Kendra chief Fatima Muzaffar said it is the political ploy of the present government to divert the attention of the masses from the real issues of women in the country. If the PM is really concerned about Muslim women, he first must do justice to Zakia Jaffery, the widow of slain Congress MP Ehsaan Jaffery and hundreds of rape survivors, she said.

Local woman activist Yasmeen Farooqi also spoke on the occasion. She said Muslim women in Rajasthan are up in arms against the bill and holding protest march across the state.

Referring to the massive silent march in Jhunjhunu town on Monday, Farooqui said more than 50,000 women had come out on streets demanding rollback of the bill.

In reply to questions of reporters, the activists said that there is provision for tale and marriage in Sharia and Quran. Marriage and Talaq are usual; there is nothing wrong with it. They said the government is listening to handful so-called Muslim women but not ready to talk them who produced 50 million signatures in favour of the Sharia that exposes its political intention.

In Jhunjhunu, the protesting women said that Islam has laid down rules for man and woman in form of Quran, which has a process for marriage and seeking divorce and the government is interfering in their religion, which would not be tolerated. The rally was lead by Dr Faiza Manzoor, Nusrat Khatoon, councillor Shaira Bano and Shaheen Siddique.

Considering prevailing atmosphere in the state as it emerged hot-spot for mob-lynching and sensitivity of the matter as protesters would be women, authorities have made elaborate security arrangements and additional force is being called in.