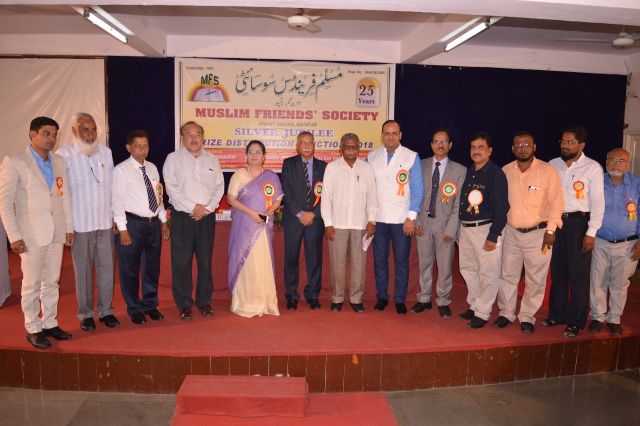 At an impressive function attended by the elite of the city at the auditorium of Anjuman College of Engineering and Technology, the merit achievers of the community were felicitated by Muslims Friends Society (MFS). Ms. Nausheen Ansari, Addl. Director General (Training) National Academy of Direct Taxes was the Chief Guest, Lt. Col. Tauqeer Mutakhab, Sr. Security Officer, Ordnance Factory, was the Guest of Honour and Dr. Shamim Shaikh, Director (Academic) National Fire Service College (NFSC), presided. Incidentally, this was the 25th anniversary annual felicitation event of Muslim Friends Society. 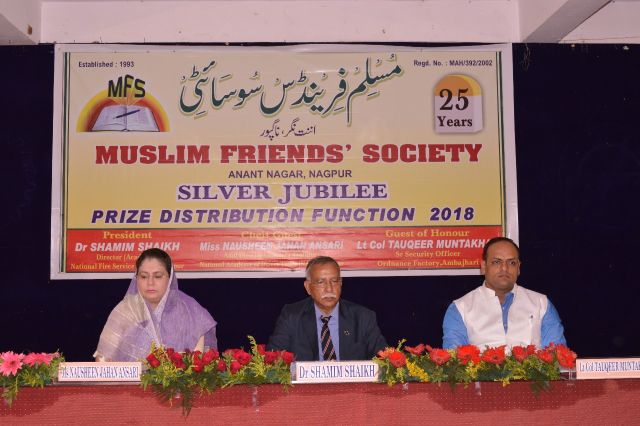 Ms Ansari emphasized the importance of excellence in both personal and professional life. She said that neither language nor one’s academic subjects were a barrier in pursuing and achieving excellence .She said that excellence must be inculcated as a habit in one’s everyday life and appealed to parents to facilitate fostering these values in their children. Lt Col Muntakhab said that knowledge was the most powerful weapon and it can empower individuals in every field of life. He underlined the importance of hard work and commitment and laid particular emphasis on empowerment of women who, he emphasized, have a critical role in moulding the future of children. He also dwelt on the importance of instilling strong moral values .Dr Shamim outlined the importance of fire engineering in national development. He emphasized that self discipline is the only assured path to success and said that one’s future and destiny is determined by the quality of one’s college career.

The speakers shared their professional experiences to highlight that meritocracy; commitment and character are key enabling factors tor eternal success. The speakers also extolled the MFS of its stellar role in celebrating honouring and recognizing talent and excellence year after year for the last twenty five years without any interruption.They said that it symbolized dedication and commitment of the entire team of the organization .They said t5he innovative model of Muslim Friends Society should be emulated by the community across the country.

Share
Previous Muslims across the globe gather in Makkah ahead of Haj
Next ‘Janadhaar’ : A way out to save Indian Democracy

By Muslim Mirror Staff New Delhi: Mateen Jamadar, a student belonging to a village in …