Najma Akhtar is now Vice Chancellor of Jamia Millia Islamia , thanks to RSS

The entry of Najma Akthar in Jamia Millia Islamia as it Vice Chancellor – with the blessing of RSS -has sent shock waves through the entire AMU community. They are expressing their deep concern and reservations on her selection as head of this minority institution. They have their reasons. In fact, her past performance at AMU as Controller of Examinations and Admissions was very controversial which tarnished the image of AMU during her tenure.

Before joining AMU in late 80s, Najma Akhtar was a doing a clerical job at a bank in Aligarh.  Thanks to  Javed Usmani, her IAS brother  who played a crucial role to push  her career and she made forays in academic administration.

When late Syed Hashim Ali (ex-IAS, AMU VC 1985-1989 ) decided  appoint Usmani at the post of  AMU registrar , Usmani requested him to promote Najma and make her deputy Controller Examinations and Admissions before his joining the  the office as registrar.

When Prof. Mohammad Naseem Faruqui became Vice Chancellor of AMU (1991-1994), the first decision he took was the promotion of  Najma  Akhtar as  Controller of Examinations and Admissions. The rest become a history. Corruption became a hallmark of this world class institution known as Aligarh Muslim University.

“AMU fraternity is not happy at her becoming Vice Chancellor of Jamia, as AMU faced the worst kind of chaos during her tenancy as Controller.We passed several resolutions against her derelictions at that time,” said Prof. Nafees who was the president of Academic Staff Association.

Even on social media, the decision faced quite a flak. “New V.C. of Jamia Millia Islamia,Najma Akhtar getting blessings of Indaresh Kumar, RSS leader.  Don’t they say a picture says a thousand words?!” tweeted Dr. SYQuraishi, an AMU alumnus and Former Chief Election Commissioner of India. 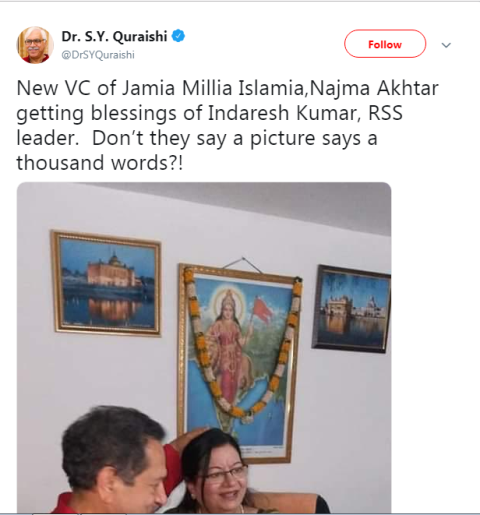 When the name of Najma Akhtar was doing the round for the post of Jamia VC, S.M. Sarwar Hussain the ex -president AMUSU cautioned the Jamia community on the basis of his personal experience as a student leader- when Najma was Controller of Examinations and Admissions. “I came to know that Najma Akhtar’s name occupies the first place in the Jamia VC panel. I want to alarm all Jamiaites that Najma Akhtar was the first one who institutionalized corruption in AMU when she was promoted from LDC(lower divisional clerk ) to UDC (upper divisional clerk) and then  directly to controller in AMU in late eighties. She cultivated a gang of criminals around her and started ruling over the campus through them so much so that teachers were assaulted; student leaders were thrashed. These gangs started taking commission in admissions. Mass copying started in exams and many criminal type research scholars got appointed as lecturers. While all this was being done the then Vice Chancellor of AMU  late Prof. Naseem Faruqui appeared helpless and we felt he was being black mailed. “I want to alarm the entire Jamia community that if this lady gets appointed she will ruin the institution through gangs of criminals and mafia. Please jump into action to oppose her tooth and nail lest you cry later. phir na kahna hamein khabar na hui”  wrote Hussain in his Facebook post.  Hussain  led the protests  against the misuse of power  and  organized hooliganism orchestrated  by Najma.

During her tenure the lawlessness and anarchism was so rampant in the campus that it attracted the national media. India Today (30, June 1993) published a special report (Latest turmoil among AMU students reflects deep-rooted malaise) on the uproar of AMU.

“The agitation reveals a shift in students’ priorities. From minority issues they have moved to general ones like corruption and nepotism….That the university has become a haven for criminals was again illustrated by last fortnight’s gruesome events. Professor Iqbal Hasan Khan of the Sunni Theology department was gunned down on the campus. Police suspect gang rivalry. His death was the fourth murder on the campus in the last 18 months. According to District Magistrate Dilip Kumar Kotia, the campus is regularly used as a base by criminal gangs” wrote Javed M Ansari.

“You will see, after sometime she will be the only ‘man’ and all ‘big men’ (professors) will be trying to save their ‘chastity’ in Jamia” wrote another AMU leader in a WhatsApp group of AMU alumni.

As expected in  her first statement after assuming the office Najma Akhtar has outlined her future plan for JMI. Apart from ‘introduction of new courses’  she would replace, modify or modernize  old fashioned courses.

We don’t just have to make our students do courses, we also have to get them jobs. We need to be job-oriented and develop our courses in consultation with industries,” Akhtar,

“We have to learn to earn. For a very long time, universities, especially central universities, have been spoon-fed by the government. Are we capable of earning something on our own?” she said.

In her statement she has given an indication about her  ‘plan’ for Jamia. She would try to reduce this central university of  higher education and knowledge  into a training school for the industrial work force, would not depend on the  funds of government and make the students to earn during their academic years.

God knows better how she will do that. Even ITI students start earning  after completing the training of plumber and carpenter.

Within two days after taking charge of V.C.  Najma Akhtar had a meeting with Prakash Javadeker, Minister for Human Resource Development (MHRD) and  assured him that she would submit ‘all-embracing plans‘ within a few weeks.

Its really strange for a V.C.  to submit her plan directly to HRD minister rather than approaching University Grant Commission (UGC) which allocates the funds and look into the issues of a university.

Is should be noted that Najma met with RSS Indresh Kumar and took his blessings hours before assuming her office at Jamia.

‘We are not happy at her being  Vice Chancellor of Jamia, because  what she had done with AMU is still afresh in our minds. Her tenure as Controller of Examinations and Admissions at AMU is a nightmare for us . Still I would like to say that God has given her a chance to serve the community as Jamia is a minority institution. She must work for the betterment of the most marginalized community and the nation as a whole’ said prof. Ziauddidin , who was very critical of her  policies and patronizing ‘goondaism’  at AMU.