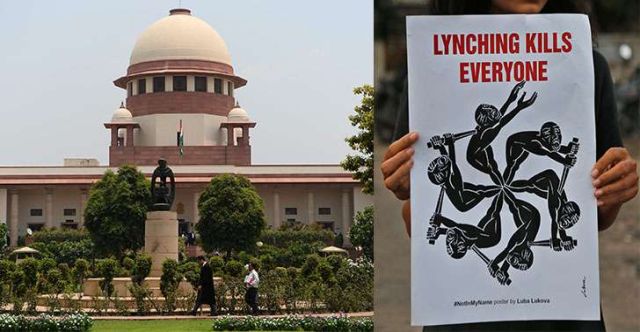 Although the Supreme Court has suggested that a law be enacted specifically to deal with the “new normal” of lynchings, it will be advisable to widen the scope of the legal remedy to include all forms of mob violence, even if doubts are likely to remain about the efficacy of the proposed solution.

The wider ambit should include the killings and acts of intimidation of the kind which took place during the recent panchayat elections in West Bengal and the sporadic targeting of rivals by the followers of the Communist Party of India-Marxist and the Sangh parivar in Kerala.

Politics is the direct cause of these instances of violence in the two states while the lynching of beef-eaters and meat traders in other parts of the country underlines the fascist trait of targeting those who are seen as “aliens” who are violating the culinary fetishes of the ruling dispensation.

On the other hand, the killing of the suspected kidnappers of children is apparently the result of an atmosphere of anarchy which has come to prevail in the absence of a stern enforcement of law and order — a lacuna which the judiciary wants to be rectified to instill fear in the offenders.

It is this last point which offers a clue as to what has gone wrong. Since the miscreants are generally no longer afraid of the law-enforcing machinery, will a new law make any difference?

As is known, conscientious officials have always known that no incidents of violence, including communal riots, can continue for any length of time unless there is political instigation. If the police have clear orders to crack down on the unruly elements at the first sign of trouble, an outbreak of lawlessness can be quickly snuffed out.

The problem, however, is that not only do the trouble-makers almost invariably have political backing, the police are also told by their political masters to let them vent their ire — at least till it becomes politically damaging because of media coverage.

As the violence during the panchayat polls in West Bengal made it clear, the goons could not have gone around carrying lethal weapons without caring for the television cameras to terrorize the voters and opposition politicians unless they were sure that the ruling party would stand by them.

It is the same with regard to what has been happening in the case of the gau rakshaks (cow vigilantes) or the group which opposed the screening of the film, “Padmavat”. Those indulging in the murderous acts in front of cameras, or threatening to bury alive an actor and the producer in a television show, would not have been so brazenly defiant if they were not sure of being on the right side of the powers-that-be.

Although influential ruling party politicians have formally berated the self-appointed protectors of cows, such admonition has had little effect on the ground if only because the large contingent of saffron trolls have unhesitatingly continued to pour their venom on the minority community, emphasising the large measure of support which the vicious “activists” enjoy.

In addition, their confidence could not but have been boosted by the garlanding of a group of killers by a Union minister or the comparison which a sadhvi (Hindu nun) in Rajasthan drew between another such murderous group and Bhagat Singh, the great freedom fighter.

A law against them, therefore, is likely to remain largely ineffectual in circumstances such as these where the “saviours” of cows have a special place of distinction among the denizens of the corridors of power.

It is obvious that behind the present fraught conditions is the deterioration in the calibre of politicians whose only objective is to remain in power even if it means bending the administrative system for their partisan advantage by undermining the autonomy and professionalism of the various services, especially the police. The latter are perhaps the most culpable as they have patently become pliant tools in the hands of the politicians.

It cannot be gainsaid, therefore, that a new law will do little other than adorn the statute book. It is in this depressing context that the Supreme Court’s 2006 judgement has to be recalled, which called upon the centre and the state governments to insulate the police from politicians.

Needless to say, no government has paid any heed till now to the judiciary’s diktat and is unlikely to do so in the future since abiding by it would rob them of the “right” to misuse the vast powers which the law vests in the rulers.

As long as the police remains a caged parrot, to quote what the Supreme Court said about the supposedly “autonomous” Central Bureau of Investigation, the lynch mobs have little to fear.

(Amulya Ganguli is a political analyst. The views expressed are personal. He can be reached at amulyaganguli@gmail.com)