Nike has taken another step into the lucrative Islamic clothing market by unveiling a hijab designed for female Muslim athletes.

The product, which has been in development for a year, was tested by athletes including figure skater Zahra Lari.

The pull-on hijab is made of light, stretchy fabric that includes tiny holes for breathability and an elongated back so it will not come untucked. It will come in three colours: black, grey and obsidian and goes on sale in 2018.

Lari, a hopeful for the Winter Olympics next year in Pyeongchang, South Korea, posted photos of herself wearing the hijab on her Instagram page. Lari is from Abu Dhabi and represents the United Arab Emirates.

“Can’t believe this is finally here!!” she wrote.

Last summer, fencer Ibtihaj Muhammad of New York became the first Muslim American woman to compete for the United States wearing a hijab at the Olympics. She earned a bronze medal at the Rio Games.

Meanwhile, the governing body for basketball, Fiba, has come under fire for banning headscarves during international competition.

Nike has also been making a play for Muslim customers in the Middle East in recent years, opening stores in the region and launching a training app in Arabic.

The Islamic market is projected to be worth more than $5tr by 2020.

Associated Press contributed to this report

Share
Previous He’s The First Kashmiri Muslim Army General Of India And He Has A Genuine Message On Militancy
Next Christian, Muslim households top in donations for charity 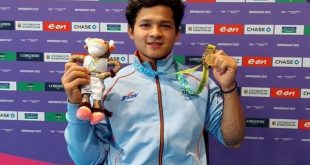